What was once a disagreement argued over in a dark corner of a comic book store has turned into a pop culture hot topic. Look at me for example, ask me 10 years ago to name a superhero I could probably just about manage Batman, Superman, and Spiderman. Ask me today and well… it’s scary how many I could name off the top of my head. With the superhero genre now permeating film, TV and even Youtube, it was only a matter of time before the age old argument entered the populace’s consciousness, DC or Marvel? 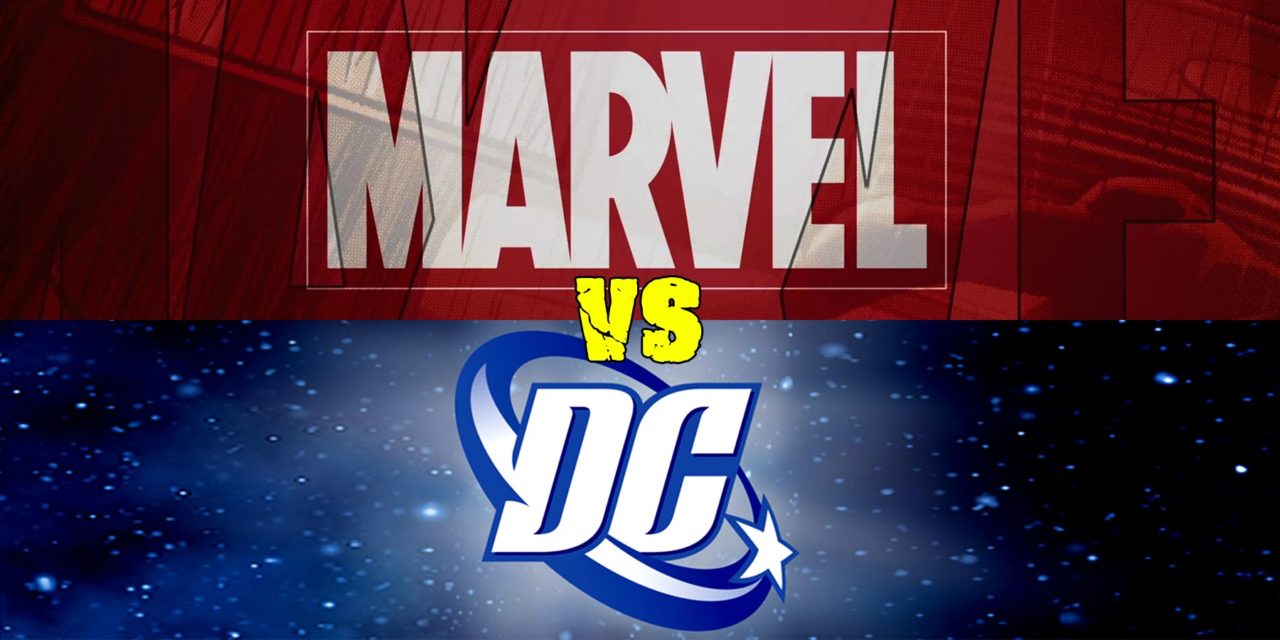 To be straight with you up front, I love both and that is the reason I’m writing this article. I’ve noticed more and more people over the last few years jumping on different sides of the argument and I can’t for the life of me fathom as to why? I know we all have our loves in life and tend to choose a side on many things. Tea or coffee? Sweet or savory? But the difference is I never see anyone cursing someone else out for preferring a bag of crisps over a chocolate bar. Where does this hate come from? I hate to say it but it reminds me of the age-old Playstation Vs Xbox fan war that carries on to this day and it’s unnecessary and downright silly. Whether you love Batman or Captain America, you have to remember both properties can exist and even benefit one another financially. This brings me on to the DCEU (DC Extended Universe) films and the popular opinion that they have been underwhelming and big flops.

I think something we can all agree on is Marvel has had the most success in both monetary and critical terms. Iron man started the Official MCU (Marvel Cinematic Universe) and it hit a home run straight out of the gate – which was all the more impressive as they used a character not many people had heard of at the time. DC however, started its cinematic universe with a character even the most oblivious of comic book fans had heard of, Superman. You’d think this would be an advantage but Man of Steel currently sits at a 55% critic rating on Rotten Tomatoes which doesn’t look great when compared to Iron Man’s impressive 94%. However if you look beyond the critics rating you will see that Man of Steel has an audience rating of 75%. Still, that’s low compared to Iron Man’s impressive score but what you have to remember is, despite initial thoughts, remaking Superman wasn’t an easy task. He is so well known, and a part of pop culture, that there was always going to be some negativity as to how you re-imagine and update the character. Iron man however, was an

unknown, Robert Downey Jr brought his Downey-isms to Tony Stark and the fans loved it – me being one of them. There was no knowledge as to what the character of Iron Man should be or even anything to compare him against unless you were a member of the hardcore comic book crowd. Taking that into consideration Man of Steel didn’t do too bad at all. On top of that Man of Steel took home $668 million at the box office while Iron man made $585.2 million. At this point, you may be thinking it’s a bit unfair to compare these two film’s box office results as the comic book movie viewing audience has grown since those early days and you’re right. The reason I’m comparing them is because they are both movies that officially started cinematic universes.

Then came Batman V Superman, the film generations had been waiting for and yes, like many, I walked away disappointed. It had so much promise but unfortunately, it collapsed under its own weight. However, despite its editing problems and story issues, we did get a great introduction to our new Batman which many felt was the best Batman we’d seen on screen (I’m still undecided). Now whichever way you want to look at it, Marvels second MCU film was a bit of a fan flop too. The Incredible Hulk landed in cinemas and made less than half of what Iron Man made, $263.4 million. The film was received so underwhelmingly they recast The Hulk. Although the film wasn’t as critically panned as Batman V Superman, it still wasn’t as big of a success monetarily as Marvel had hoped.

Many have forgotten that Marvel hit road bumps along the way to becoming what they are today. We have to remember too that DC is trying to play catch up to the quality of film Marvel is currently delighting fans with today. Over the past 8 years Marvel has refined and mastered the formula for creating an exciting Superhero film and DC is yet to find it’s stride. We have to take that into consideration and remember Marvel suffered the same early questions. If you’re a comic book fan or like me a fan of the comic book movie genre, you should support both sides. Look at the content DC has put on the small screen for fans. The Flash, which many say is the best superhero TV show available. Arrow and Legends of Tomorrow, which while not as highly rated still have a hardcore fan base. Gotham, a show that I will admit I didn’t enjoy after watching the first five episodes, but like most things I went back to it and after a while I started to love it. The characters were developed, the world was built and the tone they were going for was securely locked into my mind. Something the DCEU has still yet to discover. Of course, we should mention the absolutely brilliant and dark Netflix Marvel Universe, the bright, exciting Agent Carter, and while I’m not a fan myself, the juggernaut Agents of Shield which is still going strong. These terrific shows are all cogs in the superhero genre, whether it belongs to DC or Marvel, and these cogs all power the same machine, so to hate on one hates on the genre as a whole. Don’t get me wrong I’m not saying you have to like everything Marvel or DC release, as I don’t, but to pick one side and then hate on everything from the other is both narrow-minded and detrimental to the genre you want to grow and be successful.

We as fans have to remember that whether it’s a TV show or a cinematic universe (which is basically long form TV), it takes time to build worlds and characters fans can love. It also takes time for these big movie studios to find their tone and formula for the huge world they are trying to build. Have patience with DC and see if they can emulate what Marvel have done superbly. I’m sure deep down we all want both sides to be successful and to experience the varying character arcs and stories each side can provide.

New Call Of Duty Teaser “We Are You’re Enemy”