This invites and encourages exploration, interacting with the environment and the odd bit of pixel hunting
by Lucy Yearwood 01/05/2016

Hot-tubbing monkeys, a giant anteater-polar bear hybrid, silkworm singing a hymn to their deity. These are just some of the weird and wonderful creatures and situations you’ll encounter whilst exploring the whimsical worlds of Samorost 3. Developed by Czech studio Amanita Design, who you may know from adventure games Botanicula, Manchinarium and, of course, the two other Samorost games (the first of which can be played for free), Samorost 3 is the developer’s most ambitious project to date and was worth the eleven-year wait since its predecessor.

For those unfamiliar with the Samorost series, they are 2D point and click adventures featuring a small Smurf-like explorer clad in white pyjamas who, whilst never named, I’ll call Murphy for the sake of this review and who travels to distant planets. Although I fully recommend going back and playing Samorost and Samorost 2, there is no overarching narrative connecting the series meaning that experiencing the first two entries isn’t a prerequisite to playing the third.

Over the course of the Samorost 3 you come to understand that there is a narrative to complement proceedings told via storybook pages and pictographic ramblings from the planets’ dwellers. The story involves a group of monks, sentinels of a powerful

piece of dark matter who are betrayed by one of their own. This megalomaniac monk now resides in a fort atop a mountain, guarded by a mechanical three-headed Cerberus-like monster who must be overthrown by a giant dark matter-fueled robot. Those who want some purpose to the gameplay will appreciate the narrative but you’ll find that the story and your overall goal becomes a bit of an afterthought whilst you’re travelling to different planets and figuring out individual puzzles. And your goal only becomes apparent towards the latter half of the game. It’s not a massive negative per se because the story is enjoyable but it’s fair to say that Samorost 3 focuses on the minutiae rather than the big picture.

In the fear that they may be considered too obtuse, a lot of modern day point and click adventures rely on heavy exposition to guide players through their puzzles. Samorost 3 on the other hand goes in the opposite direction. With no instructional text or narration and characters speaking in an unintelligible language, Samorost 3 leaves everything up to the player. This invites and encourages exploration, interacting with the environment and the odd bit of pixel hunting, allowing the player to discover solutions naturally rather than being coaxed towards them. This may be a slightly off-putting prospect for some, but for me it was refreshing deviation from the usual handholding approach. 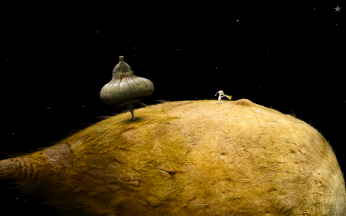 In the top-right section of the screen is your inventory and so as not to over-complicate matters, you’ll only have two or three items in the inventory at any one time. What is consistently in the inventory however is a Gabriel’s horn that allows Murphy to listen to various objects and areas on planets (indicated by concentric rings) and, if the option is there, he’ll play a tune on the horn which will usually result in a pictographic speech bubble being received in reply. These speech bubbles give subtle hints as to what the puzzle is and how to solve it but they are often very cryptic and require Murphy to explore his surroundings more.

Exploration is key in Samorost 3 and you’ll be hovering your mouse over every inch of the screen to see what can be interacted with. Sometimes interacting with certain objects and creatures doesn’t even contribute to the overall progression of the story; instead some puzzles reward you with achievements upon completion. For example, putting a parrot to sleep or making a group of cicadas harmonise in tune. Even after the story is concluded you’re free to continue exploring planets which is a nice touch as you’ll undoubtedly be inclined to uncover all the achievements.

Sometimes you’re not even aware of what the puzzle is let alone the solution and often you’ll be hopping from one planet to the next trying to figure out what to do.

That being said, things have a way of naturally falling into place and you’ll find yourself progressing through the game despite of not having a clear idea of the overall goal. You know that a bearded tea-brewing man needs some kind of root vegetable for his next brew. You’re unsure as to how this will help untangle your trapped ship from a bunch of constricting vines and have an inkling that it’ll only lead to another superfluous achievement being unlocked but you do it anyway. You find yourself focusing on individual puzzles pieces that when slotted together produce an overall picture. As I said, minutiae over the big picture.

Despite Samorost 3’s natural progression, it would be myopic to think that some folk just aren’t going to get stuck. If you do hit a brick wall, instead of using the first walkthrough brought up by a Google search Samorost 3 offers an alternative recourse via a brilliant hint system. It’s not immediately obvious that a hint system has been implemented in the game so I was unaware of its existence for some time but if you go to the menu you’ll find a journal replete with hints. In order to see the hints for the corresponding screen you must solve a simple puzzle. It’s similar to the hint system used inLumino City and it allows you to retain a sense of achievement rather than the feeling of guilt when you concede and look up the solution in a guide.

What is distinctive about the Samorost games, and pretty much all of Amanita Design’s games is their stunning art direction and animation. Samorost 3 continues this trend and further solidifies the developer’s 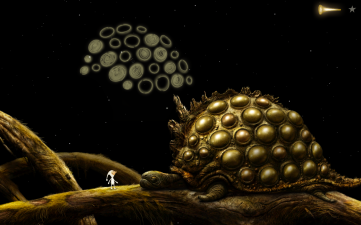 ability to produce fantastic 2D artwork and animation. Although Samorost 3 is all about travelling through space to different celestial bodies in a lively solar system, each planet’s ecosystem, whilst retaining a sense of whimsy, feel grounded in reality. The biomes and species encountered in Samorost 3 look like those found on planet Earth but are given a sense of wonder; a planet that looks like a coconut suddenly becomes more beautiful than an actual real-life coconut. Wooden logs, tree stumps and fungi are put under the microscope highlighting their beauty and giving everything a sense of scale.

Although the Samorost series is where the developer cut their teeth, it’s evident that their portfolio of games in between has inspired Samorost 3; the mechanical machinery is reminiscent of that found in Machinarium whilst the insectoid creatures look like they have been plucked from Botanicula. Creating artistic assets and textures that feel organic yet fantastical in nature is where Amanita Design shine.

The animation is equally impressive with small movements from Murphy, other creatures and the environment being accentuated in microscopic detail. The twinge of a moth’s antennae or the crawl of silkworm look so natural and convincing, breathing life into each environment. One gripe I do have however is having to repeatedly watch Murphy walk across areas I had already explored to get to the subsequent screen. Instead of speeding up the animation or using a ‘double click and you’re there’ tool like other adventure games, I had to wait several seconds to see the whole animation play out before I got to my destination.

Just like everything else in Samorost 3, the music is playful and quirky with an original funky soundtrack from Floex (which is included in the Cosmic Edition) being played in the background. Some of these tracks are also incorporated into the puzzles and achievements and seeing Murphy have a little boogie is one of the cutest things I’ve seen this year.

Samorost 3 is one of the most unique, daring and yet charming point and click adventures money can buy. Whilst the puzzles are cryptic and abstract in nature, Samorost 3 offers just the right amount of challenge; the solutions to its puzzles are neither glaringly obvious nor impossibly complex. It’s a point and click that respects my intelligence and has the confidence to deviate from the norm, rewarding exploration and trial and error. The story may fall to the wayside but its art, animation and sound design have a surrealist dream-like quality that are second to none. For adventure game aficionados Samorost 3 is a must buy. Let’s just hope we don’t have to wait another eleven years until Samorost 4.

Many thanks to Amanita Design for providing Indie Marathon with a copy of Samorost 3 for review! You can pick up the standard edition on PC and Mac now for £14.99 / $19.99. 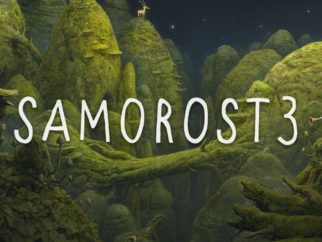 Lucy "Queen of the Indies" Yearwood was born into nobility. Never learning the value of a pound, she once paid £190 for a glass of milk. Sits upon a throne of broken dreams and ridiculous opinions but she sure does know her indie games.
One Comment