After enjoying both Star Trek: Discovery and Star Trek: Picard I had a hankering for some older Star Trek. I decided to return to the ‘second generation’ of Star...

After enjoying both Star Trek: Discovery and Star Trek: Picard I had a hankering for some older Star Trek. I decided to return to the ‘second generation’ of Star Trek series and watch them through in release order. I smashed through The Next Generation. It was my 3rd full watch of the show. TNG has always been my touchstone for Star Trek having seen so much of it when I was a kid. Even with a shaky first season it formed what I thought Star Trek was much more than the Original series. After TNG I took a little longer with Deep Space 9. This was my second full watch having hastily watched all episodes some years back. Before these full run-throughs I’d seen an absolute ton of TNG on TV and some, but not all of DS9. Reflecting a little on DS9 this time and the wider context of the Dominion War I definitely didn’t fully take it in during my first full run-through and don’t think I’d seen much of the last few seasons on TV. I dropped off Star Trek, or seeking it out on TV around the middle of DS9 and whilst appreciating it more a few years back thoroughly enjoyed most of it this time around; they absolutely did Sisko dirty with that ending. Having appreciated DS9 more this time I wanted to make sure I would get the most out of the next series, Star Trek Voyager.

Star Trek: Voyager is pretty new to me. I’ve never watched it fully through before, having only seen the odd episode on TV. I’m familiar enough with the characters from what I’ve previously watched but only to know names and positions. After finishing up DS9 I decided to get straight into Voyager and was pleasantly surprised by the first season. It was strong, if short. Stronger than the first seasons of both TNG and DS9. I’m enjoying the premise more now that I’ve started it properly rather than just my perception of being lost in space from seeing the odd episode. Some of the characters have really clicked with me whilst others have left me a little miffed and even frustrated. Below is my current ranking of the main characters in DS9 based on the first season. There is a notable absence and I hadn’t realised Seven of Nine didn’t appear in the first season, I guess two new, unknown race additions in Neelix and Kes was enough to begin with. Saying that…

Fucking hell he’s annoying. Yes, in a way he is meant to be and comically as the self-appointed moral officer it mirrors his more humorous dialogue and actions. It’s just too over the top for me. I think the rest of the crew have a few funny moments, especially The Doctor, and Neelix’s faux pas just push him over from funny to irritating. This is played up in the show with much of the crew feeling similarly. The more senior staff find Neelix irritating but quickly warm to him, much more than I have. Not as much as Neelix but Tom Paris is also incredibly annoying, just in a super arrogant way. Playing up the action hero role and throwing himself into danger in a far too gung-ho manner. Yes, it plays up to his past and his involvement in defecting to the Maquis but as with Neelix, it’s too over the top. As a free from imprisonment Maquis, he quickly settles in (like most of the bridge crew who were Maquis) to Federation ways. His short time with the federation before his defection plays up to his arrogance that he can do everything. Pilot the ship, yeah. Go on away missions and get accused of murder, yeah. Set up a weird fake french bar and pool hall for everyone to hang out in, pretty much. Just tone it down mate.

B’Elanna comes off as really one-dimensional initially. It’s angry mostly and this is directed towards the Federation more than anyone. Not as quick to fall in line as others with Federation ways, she’s not that much of a dissenting voice either, often deferring to Chakotay. She gets a little character building and sways towards the Federation with her promotion, then a big, needed focus in ‘Faces’. In a way, I’d have preferred to have the two split B’Elanna’s running around giving more tension in situations and the crew having to deal with that. Who would outrank who and how would the different species be treated by Federation and Maquis alike. Unfortunately, that story is wrapped up in one episode and not explored enough.

Whilst being a Vulcan can make him seem quite cold in the relationships on Voyager Tuvok doesn’t get much time to develop. He’s sidelined for Chakotay in rank when the two crews merge but brushes it off and just cracks on. He puts forward alternatives on what to do but is often overruled. Just brushes that off too. His biggest development comes in the final episode where he has to train some of the Maquis crew and he learns that he needs to be more flexible. I’m pretty sure Tuvok is quite old, in relation to the rest of the crew, and it’s odd that at no point in his life so far there was a need for some flexibility. I like the Vulcan characters in Star Trek because of that disconnect from emotion and how they see situations differently so I really hope Tuvok gets more time to grow and lead some episodes.

There is always more of a focus on the Captain in the first season. The leader all the crew turn to in times of trouble for direction in whatever space mishap they are in. Janeway doesn’t quite get that same treatment as Picard or Sisko. She has some focus on her but there are plenty of issues she defers to other characters on, specifically Chakotay and Neelix. This slight change in leadership style is welcomed and I’m glad she isn’t just a female Picard. She’s a clever character used well when needed. I don’t think there is much I need more from her than to be determined when required and to sit back and allow the other characters the time to be explored. This though puts her smack bang in the middle of the list, very vanilla at the moment.

Harry is the everyman to begin with. New to the crew, a fresh Ensign straight out of the academy. He provides a great point of view on a new ship for the viewer to relate to. Yet, Harry is more than that. Underused early on he starts to gain more confidence and speak his mind as the season progresses. Putting him, alongside Janeway, as the main story push in ‘Prime Factors’ allowed me to understand Harry a little more and his slight trepidation at being put in awkward situations. Though he is quick to adapt and swift on his bridge post. As a fresh cadet he seems eager to impress and as the slightly more Federation leaning side to the Harry and Tom double act has easily understandable motivations.

Throwing a different style of character into the mix when everything else is pretty familiar can often backfire, think Major Kira on DS9 and how annoying she is, The Doctor though is excellent. He often brings the comedy in lighter moments between more serious encounters. This ranges from pithy one-liners, some slight slapstick appearances on camera and being super unsubtle and making comedy from awkward social situations. Like Harry, he helps the viewer relate to the crew and this area of space by being new and asking questions about the species they encounter. He’s well placed in sickbay to give some exposition on the Delta quadrants’ inhabitants and the differences they have to those on Voyager. He could absolutely have Neelix’s role wrapped into his and have a ton more screen time, which he should have as one of the better characters on the ship. Hopefully, Neelix gets another virus that The Doctor just can’t cure. 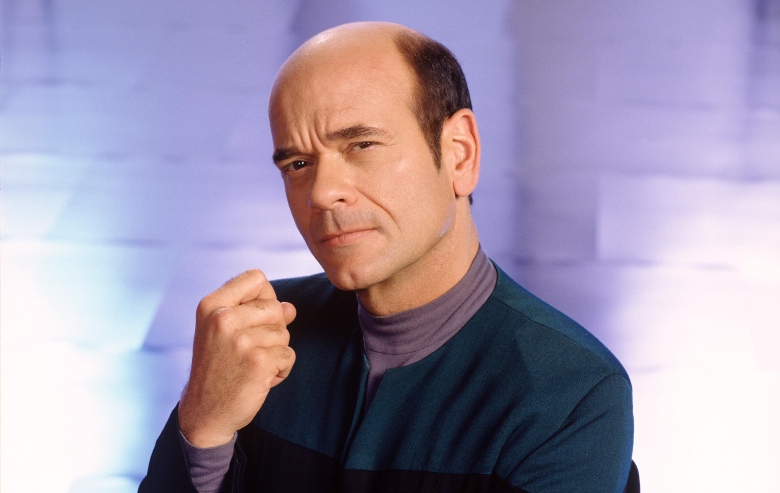 Having been in Star Fleet before defecting to the Maquis he falls in line pretty quickly, but this is a key moment for the crew and positions Chakotay in an interesting place. He is the buffer between the two crews. Janeway uses this to her advantage as he is a little ‘dissenter’ come ‘advisor’ to her. She positions him to take the brunt of the crew cleverly and shields herself from the more petty issues on the ship. This gives Chakotay range. He can be slightly more Federation or Maquis dependent on the situation and then bring the other side of his knowledge to counter something else. He sits almost above the rest of the crew yet is close enough to them that they approach him with issues. His relationship with Seska appears almost as quickly as it disappears (or Seska does) and provides us a little more insight into Chakotay and his loyalties. As a counter to Tuvok, he shows a range of emotions and is very human in this. Chakotay is one of the more interesting characters onboard and I look forward to seeing the story with Seska play out.

She’s just the best. Hands down the only real reason to watch the show. Fuck you if you disagree. I think Voyager’s first season is written well. The characters have all had an effect on me in a similar way to some of the relationships they develop with each other. There were plenty of missed opportunities though and too many one-shot episodes. Without more recurring issues, once the two crews had resolved that they needed to get on, it feels light on the drama though it is a much shorter season at only 16 episodes. I’ll be flying straight into season 2 and will share more thoughts when other notable characters have joined the crew.

Deathloop Always Has One More Mystery, Even After Earning the Platinum