Unlike most other rhythm games that assault your every sense, Melatonin doesn’t rely on flamboyance; it instead delivers a more laidback experience that finds excitement in the mundane. As... 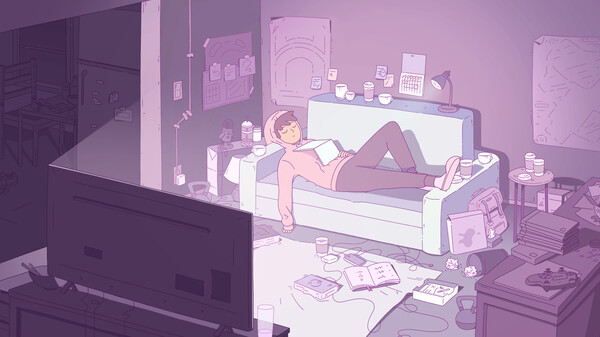 Unlike most other rhythm games that assault your every sense, Melatonin doesn’t rely on flamboyance; it instead delivers a more laidback experience that finds excitement in the mundane.

As someone who lacks musical ability, I’m often hesitant to delve into the genre of rhythm games. Yet this wasn’t the case with Melatonin where I actively sought out getting my hands on a copy of the one-man-developed release. There was something alluring and comforting about Melatonin’s pastel dreamworld that made it more relatable than, say, being a rockstar strumming away to perfectly timed chords in front of a baying crowd; a silver-plated beetle racing through space on gravity-defying tracks; or a Jedi master slicing through cuboid projectiles hurtling towards the screen. Unlike most other rhythm games that assault your every sense, Melatonin doesn’t rely on flamboyance; it instead delivers a more laidback experience that finds excitement in the mundane.

Melatonin is the enzyme that controls the human’s sleep-wake cycles and the game (made by the appropriately named Half Asleep Games) fittingly takes place in the dreams of an Average Joe. You know the type; suburban, just-about-middle class, not poor enough to wonder how they’re going to pay for their next meal nor rich enough to be pondering which guest to schmooze at their next yacht party; but someone who still worries about financial obligations and societal pressures nevertheless. The type that I, and most people reading this review, can both fortunately and unfortunately relate to.

Melatonin opens with our protagonist slouched fast asleep on the sofa; likely recovering from a food coma after over-bingeing on fast food, the crumbs not yet brushed from his hoodie. Embarrassingly but somewhat endearingly relatable. It’s in the protagonist’s dreamscape where you can select individual levels and dive into a deeper layer of his subconscious. Each level is represented by a different facet of everyday life wherein you must tap/press a key/button to the beat of very mundane actions such as the swiping of a credit card or the tip-tap of a smartphone screen. The game encourages you to do a short tutorial run of each level known as ‘Practice Mode’ so the different keystrokes/button presses, which become more complex the further you progress, are not a complete surprise when diving into the Score Mode for the first time. Like most rhythm games, Melatonin judges your keystrokes/button presses depending on how early and late they are compared to the beat and rewards you with a ‘perfect’ badge, or conversely a ‘miss’ badge, when they are just that: perfect or missed entirely. The more perfect badges you get, especially when chained together, the quicker a progress meter builds for each level’s zero-to-three-star rating.

Although entirely based on everyday human actions and interactions, each level is surprisingly inventive yet still grounded and relatable. For example, there’s a level where the protagonist is sat in his gaming chair, shooting virtual alien foes whilst donning a VR headset. There’s one where he is lifting weights in the gym opposite a better, buffer version of himself. There’s one where he’s swiping his credit card to purchase various items of apparel from what I can only presume is a high fashion retailer. Scenarios that are very pedestrian and ordinary compared to other rhythm games but form the backdrop to most of my dreams, wishes and hopes of being just a little bit better than my average self. Having more time to finish the games in my ballooning backlog, having a better physique to obscure the beer belly, having a better salary where I can justify buying the £200 pair of Jordans I’m far too old to be wearing to seem fashionable. Melatonin revels in this feeling of mediocrity and the endless pursuit of something more, yet it does it in a way that’s neither shameful nor resentful but instead playful and compassionate.

This compassion extends to the gameplay. Whilst Melatonin features visuals that are easy on the eye and extremely chilled music; some of the best I’ve heard in my, admittedly, limited exposure to rhythm games; you’ll still require the auditory acuity to advance through the game’s twenty levels. You will need to have amassed enough stars in order to progress to each of the game’s five chapters and some of the levels pose quite the challenge. However, there are plenty accessibility features that prevent the game from becoming a frustrating slog, especially for those of us who aren’t musically inclined and/or lack precise timing. Hop into the settings menu and you’ll find options such as visual and aural metronomes if the sound cues and animations on screen (such as the protagonist grunting and lifting weights to the beat in the exercise dream) aren’t enough. You can toggle the settings so the scoring is more lenient or the timeframe in which to get a perfect badge is more forgiving. It’s welcoming to see so many accessibility options in a game of this size and scope. Also, there’s probably one of the best options I’ve seen in a rhythm game; an auto-restart setting that will automatically restart the level if you get anything other than a perfect badge on every beat – essential for the speedrunning community and those of us who want to do flawless three-star runs.

Whilst I gave up on trying to do flawless runs pretty early on, I still had plenty of incentive to go back and replay levels to chase higher scores. Tapping my foot to the excellent soundtrack, appreciating the excellent animation and marvelling at the detailed and beautiful hand-drawn art was enough reason to dive back into levels. The muted pinks and purples as well as the ability to tailor the difficulty as I wanted makes Melatonin one of the least stressful and most relaxing rhythm games I’ve played to date.

It’s fitting that Melatonin released mid-December when a couple of weeks later in the new year we’re all regretting the expanded waistlines and diminished wallets that the season of excess has kindly bestowed upon us. Melatonin provides a relaxing, charming experience free of shame, so it is here then, in this ethereal pastel dreamworld where I’ll escape to until the month of regret, otherwise known as January, has disappeared from the rear-view mirror, tapping my foot to the soul-soothing beats as I do.

The Patient Has No Patience