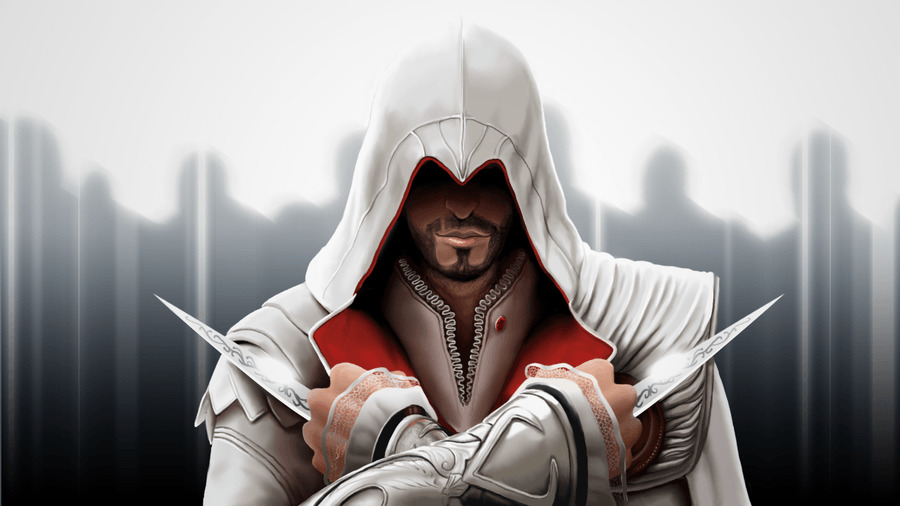 "Can Brotherhood finally step out of AC2’s shadow and be a game of independent self-worth?"
by Kyle Barratt 23/11/2017

The following article is not your standard game review. It’ll be informal and tangential and aimed at an audience already fairly familiar with the game in question.

Assassin’s Creed Brotherhood. The difficult second album. Yeah sure, Assassin’s Creed 2 was the second in the series but it didn’t have to follow and improve upon a masterpiece like Brotherhood did. I’ve always liked Brotherhood as an extra piece of Ezio’s story but never to the degree of AC2; while I take issue with those who proclaim it as nothing more than AC2 DLC it certainly does lack that epic feel that the previous game had. It had been years since I last played the game though and with the Ezio Collection being released for PS4 it gave me the perfect reason to revisit the game and evaluate it for what it truly is. Does Brotherhood earn its status as nothing more than additional content or can it finally step out of AC2’s shadow and be a game of independent self-worth?

Revisiting a game after many years does bring new insight to the experience. I remember thinking upon release that Brotherhood’s map was enormous but now that I’m used to more modern games, even recent AC entries, the map seems small and barren. So much so in fact that the fast travel system seems meaningless; it’s faster to ride a horse from one side of the map to the other than find the nearest fast travel station, face the enormous load time as it moves me to the other side of the map and then go from that fast travel station to my destination. I’m getting that hefty load time using a PlayStation Pro which is usually lightning fast, thankfully I’m not revisiting the game on PS3 where the load times must be excruciating. Having said that the game’s version of Rome did leave a big impression on 14-year-old me when I first played it, eventually leading me to visit the city a few years ago. I even felt compelled to go to the real-life Tiber Island, the headquarters of the Assassins in the game, only to be disappointed that there was absolutely nothing there. The music by Jesper Kyd is key to the great sense of location felt in the game as well as aiding atmosphere and tone. While the score isn’t quite as memorable as AC2’s each piece was recognisable on this playthrough and brought with them a pleasant stab of nostalgia.

I love that the game picks up exactly where Assassin’s Creed 2 ended with little exposition as to what’s occurring. The game plants us back in the vault under the Vatican with the vision of Minerva just disappearing and it’s a bold move to alienate newcomers like this who will have no idea what’s going on. Ubisoft is showing that it appreciates existing fans of the franchise whereas nowadays with the recent AC entries the first couple of hours are spent teaching us about the Animus and the conflict between the Assassins and Templars just to bring the newcomers up to speed. Overall, I like the opening sequence to the game which features Ezio having a normal day in Monteriggioni, helping the quirky townsfolk and thinking his life as an Assassin is over before the town is invaded and almost destroyed. It’s a nice change of pace, just exploring the area and focusing on Ezio’s journey. While it’s not quite the same slow burn character focused opening to Assassin’s Creed 2 it’s better than the instant action openings of recent games in the series which have to throw explosions at the audience to keep their wandering attention; looking back Brotherhood’s opening is the stepping stone between the two and I’m surprised that the current flaws with the series started manifesting themselves so early on in the franchise’s run.

Like the game’s name suggests the backbone of the game is the creation of an Assassin brotherhood to take down the Borgia. I like how Brotherhood evolves Ezio from an Assassin to a Master Assassin who truly believes in the Creed and the recruiting and training of Assassins is interesting as a plot point but gameplay wise it is anything but. The Assassin trainees are boring characters with no personalities and near identical character models whose training consists of being sent on useless missions which unlocks fairly rubbish attacks and power-ups. The gamer and Ezio himself have no reason to gain any real attachment to these characters and this feels like a missed opportunity. The brotherhood aspects aid both the story and Ezio’s development but the desired effect of this group isn’t achieved to anywhere near its full potential and is a disappointment to its namesake. Memory sequences should have shown Ezio as an actual teacher of both action and The Creed with the brotherhood consisting of actual named characters. This would have made the story much stronger and each sequence wouldn’t have to feature Ezio tracking down and killing a target. Variety instead of an unfulfilled gimmick.

It’s an interesting move to keep Ezio and primary antagonist Cesare apart for most of the game and it’s a very cool and memorable moment when they both literally run into each other for the first time. A negative of keeping the narrative of the game singularly through Ezio’s point of view is that we spend very little time with the villains and their motivations are either hazy or simplified so we can understand them despite the little screen time. The Borgia are a compelling family but every point of interest is simply referenced and never explored making them somewhat frustrating. It is great that the game does give us a baddie that is a physical rival to Ezio, something Brotherhood does better that AC2 which culminated with a fist fight with a fat Pope. Part of me wishes that Lucrezia would have risen up and become the primary antagonist, she certainly seemed the most venomous character in the game. The big bad of the previous game however – Rodrigo Borgia – is a disappointment in Brotherhood, largely absent until his lacklustre and confusing death. The game’s database states he was suffocated with a poisoned apple which is ironic but not shown particularly well. Cesare shoves an apple in his face and then a second later he’s dead on the floor.

The final memory sequence is a memorable part of the game but not without its problems. Being in another country and in the midst of an all-out war is cool to say the least but you never really feel the scope of the battle; I wish the finale was even bigger and more bombastic. The whole game has been setting up a duel between Ezio and Cesare and ultimately the fight is a disappointment due to the limited combat gameplay. I almost wish the fight between Ezio and Cesare was a cinematic similar to the one at the start of the Revelations so we could see what a true battle between the physical equals would be like rather than the button-mashing fight we ended up with.

Let’s discuss Ezio’s allies for a while starting with Niccolo. I like that we get more of the real historical figure after he appeared only in a cameo role in AC2 but his stoic and stubborn attitude made him almost a personality vacuum at times. While Niccolo’s philosophical discussions with Ezio are a highlight of the game it’s Volpe who is my favourite supporting character. While I always thought Antonio running the Rome thieves’ guild would make more sense I’m glad it’s Volpe because the storyline of infighting among the Assassins makes sense coming from him. Assassin’s Creed often shows the Assassin’s as always right but I like that Volpe has real insecurities, and beef with Niccolo, which almost leads to murder within the ranks. Ezio bringing Niccolo and Volpe together is the one place where the brotherhood theme works well, however while I’m glad Niccolo was not the spy the reveal that it is just some random nameless thief who Ezio just so happens to run into at the most convenient time is just ridiculous.

And now we come to the controversial present day Desmond sequences. I love the modern-day storyline from the first five games of the series because without it we wouldn’t get the more sci-fi aspects of the series and the extensive mythology. Lucy, Shawn and Rebecca are fun characters and getting Desmond out of the animus made up for the lack of present day in AC2 however having played all the games in the series there are many things in these segments that make no sense and ruin certain scenes at the end of the game, primarily those with Juno. At the end of the game Juno, and Subject 16 after completing his missions, spout a lot of complicated stuff about the end of the world and what Desmond’s quest is. We understand enough to get the general gist but what we don’t understand feel like cryptic messages about what we will do in future AC games and at the time I liked this because I thought Ubisoft had a solid plan and could tease such information because it would most surely pay off in the future. However, looking back this obviously wasn’t the case because all of the statements about Desmond’s son and him having to find ‘Eve’ before finding the temples are ignored completely in future games essentially retconning the mythology and making the complex ending to Brotherhood pretty much useless. I do still like the shock of Lucy’s death although the explanation we get for it which is stupidly in DLC for Revelations goes some way to undoing the one good thing about Brotherhood’s present day climax.

In the interest of time – and word count – here are my last few thoughts in easy to digest bullet points:

Looking back on this preposterously long article I can see that I’ve been quite negative about the game. However, I do really enjoy Assassin’s Creed Brotherhood because it’s fun to pick up and play and holds nostalgia for me. Although, even with the nostalgia I’m surprised at just how many issues I had with the game during this revisit and all I can see is a game of missed opportunities. Overall, it’s probably the worst game of the Ezio trilogy but I’ll have to replay Assassin’s Creed Revelations before I can firmly make such a comment. You can expect my revisiting Revelations article up on the site in about a month and if you missed it here is my revisiting Assassin’s Creed 2 article.

What are your feelings towards Assassin’s Creed Brotherhood? Let me know in the comments and geek out with me about Video Games on Twitter @kylebrrtt.