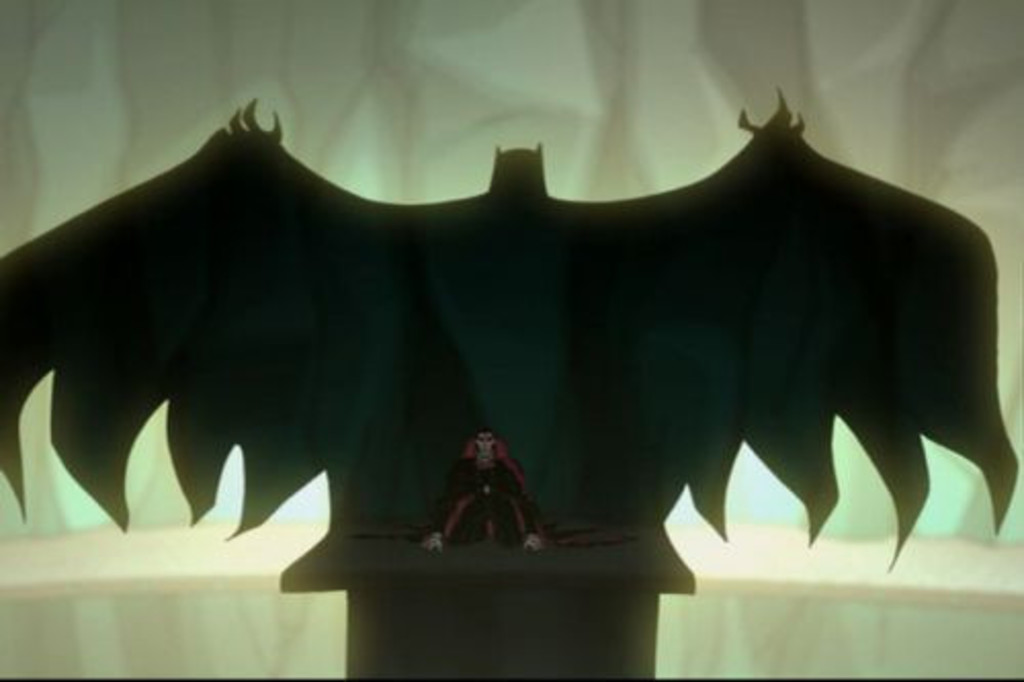 The Batman Vs Dracula: A Forgotten Animated Gem

"An intriguing and dark tale that I believe is among the best in Batman animation."
by Kyle Barratt 06/02/2018

Nearing the end of the straight-to-DVD animated movie ‘The Batman Vs Dracula’, the titular iconic vampire refers to himself and Batman as “kindred shadows”. It’s a phrase that I’ve not been able to get out of head since watching the film and it’s the epitome of the parallels the film draws between Batman and Dracula. I had never seen the film before and from the title I was expecting a silly schlock fest so I sure was surprised when the movie managed to tell an intriguing and dark tale that I believe is among the best in Batman animation. ‘The Batman Vs Dracula’ is a spin-off from the animated series ‘The Batman’ of which I have never been a fan. Compared to the much superior ‘Batman: The Animated Series’, the show is quite childish and the art style and character designs are hit and miss. The film however is something special, managing to appeal to the younger viewership while telling a genuinely dark, mature and deep narrative that perfectly explores the similarities and differences of the two leads while being a fun action adventure.

“My legacy has been quite influential”, Dracula remarks when he first sees Batman. The comparisons between hero and villain is the beating heart of the film and allows for Batman to question other people’s perceptions of him and his own. He believes he takes the bat-like form to put fear in the hearts of his rogues’ gallery but when faced with an antagonist who does that to everybody, good and bad, he questions whether or not a symbol of good and light should be so dark. The comparisons between Batman and Dracula are plentiful: both prowl the city at night, both have dominion over bats, both can seeming disappear into the darkness at will. The film makes their silhouettes eerily similar and both dwell in caves, existing nocturnally.

In wonderful dream sequences, Bruce sees Batman as a vampire showing he is now concerned with his image and using the legacy of Dracula. Batman needs to be seen as a creature similar to Dracula to be effective but now that he is face-to-face with the legendary villain he begins to question everything. This inner turmoil is fantastically represented throughout the 80-minute run time and the comparisons are not only played out internally but are explored in the plot too. The citizens of Gotham City mistake Dracula for Batman and soon The Dark Knight is hunted by the police for crimes he didn’t commit. There is a fantastic scene where we see SWAT chase Batman into an old warehouse (Gotham City is seemingly full of such places) and one by one we see the cops get taken down, dragged into the darkness and pulled up to the ceiling. We presume it is Batman doing this but it is then revealed to be the work of Dracula, highlighting the unmistakable similitude of Batman and Dracula’s methodology.

Not only is the film a great Batman movie but it’s a fantastic Dracula film too. It’s clear the filmmakers are huge fans of the Dracula mythology and filmography because the film is dripping with homage and deep understanding. Dracula looks great, both in human (Dr Alucard) and vampiric form, and the always fantastic Peter Stormare voices him with that perfect balance of charm and terror. His goal is standard fare but done well with Dracula creating a legion of vampire followers and attempting to resurrect his long-dead bride through sacrificing Vikki Vale. Dracula himself is resurrected early on in a style reminiscent to the Christopher Lee Dracula film ‘Dracula: Price of Darkness” where blood revives him. Here it is Penguin, voiced by everybody’s favourite aquatic sponge Tom Kenny, who cuts himself in Dracula’s tomb allowing the Dark Lord to rise once more, his body forming from bone and his heart beating for the first time in centuries.

We can’t forget that this film is a spin-off of a children’s TV show but for its audience and PG rating I’m stupefied at what the filmmakers managed to get away with. This version of Gotham demands horror with its sharp gothic architecture and dim lighting. The film is macabre from the start with a scene in Arkham Asylum accompanied by a chilling score by Thomas Chase Jones filled with horror-inflected motifs. The vampires are genuinely frightening and one scene featuring a creepy girl singing in a dark rainy street feels like it was pulled from a modern day R-rated horror film. It’s the blood that really pushes the boundaries however with some small instances of drops of blood early on being overshadowed by the scene set in a blood bank. Vampire Joker raids the blood bank for obvious reasons and ends up destroying the place with blood going everywhere, raining from on high which completely covers Joker from head to toe as he laps it up from the floor. I honestly don’t understand how they got away with it. Yes, they do light the scene to make the blood look black rather than red but that somehow makes it seem even more creepy.

It’s not all blood showers and massacres however for there is fun to be had in the concept of Batman taking on vampires. He updates his ever-increasing armoury to include a giant solar light emitter, holy water injectors and, of course, garlic-dipped Batarangs. There are a few too many blood-based double entendres and gags from Penguin and almost every scene ends in a fade transition and the same music que which gets irritating fast. Overall though the film is surprisingly brilliant and mature and ends with a truly incredible image of Dracula cowering in Batman’s shadow to avoid the sunlight. An image that is one of my favourites in any Batman film, live action or animated. I’m going to have to watch it again to confirm my opinion but ‘The Batman Vs Dracula’ just might be my second favourite animated batman movie, second only to ‘Mask of the Phantasm’.

Have you seen ‘The Batman Vs Dracula’? Have I convinced you to check it out? Let me know in the comments and geek out with me about TV, movies and videogames on Twitter @kylebrrtt.

Tanked Up 104 – Playing Streets of Rage at Wiper and True