For several years people have spoken about the middle of the gaming industry falling out. Around the time of the last big financial crash, in 2008, and a shift in the gaming market with new consoles and the mobile market emerging, around 2006, mid tier games seemingly disappeared.

For roughly 10 years it would appear we only had bigger AAA budget or indie titles, of course this wasn’t true but the middle had taken a big hit. Yet there has recently been a resurgence of the middle, of AA games in the spotlight. This hasn’t been brought about solely by savvy publishers but by self or publicly funded developers creating higher budget experiences with small to mid sized teams. With City of Brass Uppercut Games sit firmly in this space and there’s ample room for them to grow.

City of Brass knows what it is. A timed rogue-a-like and first person action loot driven dungeon crawler. OK, that’s a mouthful and a lot of vying genres and game-play hooks to weave together. City of Brass does so with some success. Whilst these elements by themselves have been used individually in games, Uppercut Games have managed to bring them together cohesively so the player is doing a little of each without having to think too much about them individually. 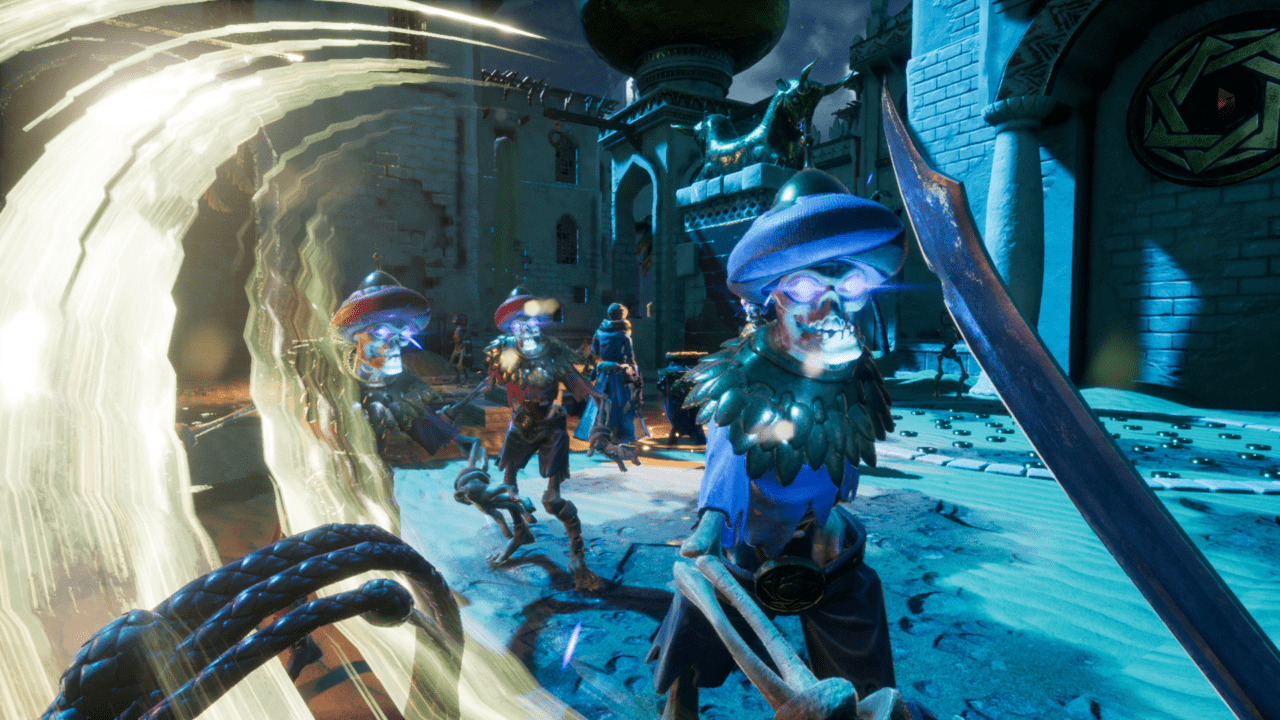 As an unnamed adventurer you seek the treasure the City of Brass holds. There isn’t much more story than that and it manifests with navigating the adventurer through procedurally generated levels grabbing gold. The goal is to get to the end of each level and make your way further into the city for larger riches. The first person perspective adds a fun element to this speed running exploration. It adds more to the combat style chosen than a 3rd person perspective would have. You’re armed with a melee weapon in you’re right hand and a whip in you’re left. This makes for some interesting combinations of attacks, stuns and pushes and allows some enemies to be kited around the spaces for better control of an encounter. At the end of every third level there’s a ‘gatekeeper’ encounter which are challenging and need you to use all the skills learn’t to overcome.

Yet combat is my biggest issue with the game. It feels clunky. It doesn’t feel as smooth or as fast as I’d like. I’d often misjudge the proximity or exact hit box of an enemy and completely miss them. You have a prompt with the whip which will tell you when in range of an enemy or an item and this feels good. It’s the sword / one handed melee weapon that’s off. You swing, you miss. Take a step back as an enemy comes forward, swing again and hit. There’s a fraction of a difference between the two but that can make all the difference. The city itself, it’s enemies and traps are fun. The developer has gone for a slightly cartoony Arabian undead nights theme which fits the mix of genres and the actions you’re performing very well. As mentioned every third level houses a boss to defeat before finding the exit yet this also heralds a change of setting and enemies. Whilst the first three levels are of a city outskirts style you move into more lush palatial maps or a lava filled Catacombs. This also brings with it a change to the cities traps. Spike pits fill the start but soon falling doors, lava pits or swinging swords will catch you off guard. Also keeping each level feel fresh is the wide variety of enemies. Mostly consisting of skeletons, some ghoul type sorcerers and the occasional genie they vary in type both aesthetic, how they approach and how they attack. It provides a nice step in challenge between these three level settings. Suddenly encountering a skeleton with a shield and spear becomes a new challenge to overcome. My favourite enemy is the armed statue which only moves when you’re not looking at it. It’s made of rock so Swords don’t hurt it and I found myself running then spinning to see where it was and it appearing in my face. At first, perhaps because of my issue with the combat, I struggled to jump past the first three levels. I preserved however and was pleasantly surprised at the change in setting and difficulty when I progressed.

Whilst the main goal is to grab gold and escape you can spend some time on a light upgrade system by spending gold on equipment or different attacks. These are provided by friendly genies that you encounter in each level. Whilst providing upgrades the genies also allow you to use a wish of which you get three (of course). These can give you more health or to change the allegiance of an enemy genie for example. These upgrades carry through to each level giving you a sense of progression and growing strength. Some, like a better sword, whip or armour can be banked and left for another play-through giving a little extra boost so you don’t just feel like you’re starting again after death. One cool feature is the use of warp points. Once a boss has been defeated you open up a warp to the next level so, when starting again, you can jump to levels 4, 7 or 10. Of course this is at the expense of no upgrades and each warp point uses up your wishes so to jump to level 10 you start with no wishes and no upgrades just for that level progression. There is an overall experience system which, apart from a banked item, is the only thing that continues over on each life. On attaining a new level you get a new upgrade to start the game with. These upgrades didn’t feel over powered or as if they changed your ability to progress much, they just added a little extra to a run. I’m not sure if this progression system is really needed in the overall game. It gives a sense of, well, progression yet it’s a slow progression. I never really felt as if I was gaining much with a level up.

Whilst city of brass has plenty of positives, and a few negatives, I can’t help but feel Uppercut missed a big trick here. That is VR. The first person perspective and combat, the swinging of the sword and the cracking of the whip feel perfect for experiencing physically rather than a few button presses. Perhaps movement would be a little harder in terms of flow through a level but it feels like a missed opportunity. This is perhaps a little harsh on Uppercut Games as I’m sure they’ve used their budget to the fullest. That doesn’t mean it can’t follow on later.

Why? It’s a good example of combining several hooks and mechanics successfully that will have you feeling satisfied when you get to the end of a level.

But… It becomes repetitive and can feel like the actions you perform and overall progression is slow. If a VR version is going to be released wait for that.