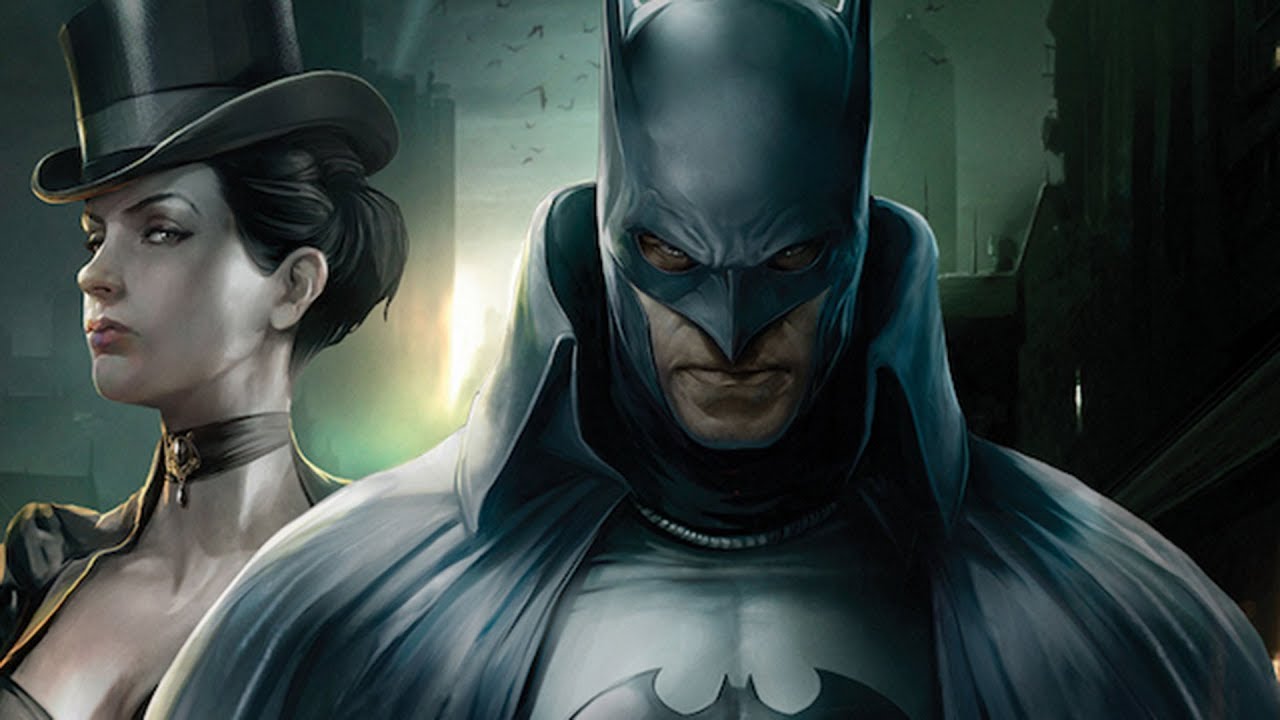 "Gotham by Gaslight just might be the best Batman film since The Dark Knight and here’s why:"
by Kyle Barratt 01/05/2018

Described as the first Elseworld, the comic-book Gotham by Gaslight gave us a retelling of the Batman mythos set in a Victorian-era Gotham City. The 1989 book sees Bruce Wayne become Batman and take on Jack the Ripper, who has chosen the dark industrial streets of Gotham City as his next stomping ground. It is one of my favourite Batman stories and earlier this year Warner Bros Animation released an adaptation on disc and digital. I usually pick up the blu-rays of these DC animated films, watch them once, utter something about how mediocre they are and then sell them on. But Gotham by Gaslight is different. After a couple of months and watches later, the blu-ray is still sitting on my shelf and is in no danger of being stuffed in a jiffy bag any time soon. It’s a big statement but I think that Gotham by Gaslight just might be the best Batman film since The Dark Knight and here’s why: I’ve always been a fan of keeping Batman in a timeless setting. The animated series did a fantastic job at this, keeping modern technology away from the story and having a design aesthetic that placed it in an unknown time. What I didn’t know until I started reading Gotham by Gaslight and then watching the movie soon afterwards was that I had always wanted Batman in the 19th century. It works for the character so incredibly well to see his profile against plumes of smoke from factories and on the narrow, cobbled streets of a city in the throes of the industrial revolution. It’s a time where belief in the supernatural was common place and the idea of Batman as an almost mythical figure prowling the streets like a phantom just works. The film is incredibly atmospheric and like ‘The Batman Vs Dracula’, the other Batman animated film I love, it becomes a horror film at points with Jack stalking his prey through narrow streets and bloodstained butcher’s shops before brutally killing them.

The setting also allows for some cool story beats like Gordon being a veteran of the Civil War and open displays of sexism are explored. Selina Kyle questions whether the police would do more if those being butchered were men and the Mayor quickly dismisses her, referring to her as a “disruptive female”, and later Bruce has to sneak her into a club that is men only. Elitism is also shown with the division between rich and poor in Gotham explored. The rich, other than Bruce Wayne, care little for the human lives being lost with Jack the Ripper exclusively targeting young prostitutes in the poverty-stricken areas of Gotham leaving the occupants of such areas feeling abandoned and living in fear. This all adds to make an interesting and realistic portrayal of a city that could just easily feel like background art and these themes are explored in engaging ways while most straight-to-DVD animated movies are usually fun but shallow. The animation and editing highlight the division in the city too with great cuts from oppressive and dark narrow streets to the bright and lavish open spaces of the World Fair which only turns gloomy once Jack visits there in the final act.

It is clear that the animation team has great reverence for the setting and source material with the essence of the original comic intact despite huge differences in plot, including the identity of Jack the Ripper which I won’t spoil here. This isn’t The Killing Joke where they expanded the source material by just plopping a rubbish Batgirl short film on the front of it. Here the new material is woven in very well, particularly the appearance of Selina Kyle who is a character we have seen an inordinate number of times but somehow feels fresh here. Material is also taken from the disappointing comic-book follow-up to Gotham by Gaslight, Master of the Future, including the World Fair, zeppelins and Tolliver being Mayor instead of police commissioner to allow for Gordon to take that title. Also, unlike The Killing Joke, the R-rating (15 here in the UK) doesn’t feel like a marketing ploy and is needed to tell this story the correct way. We get some brutal violence from broken bones to blood flying across the air and even a quick shot of someone being ripped in two.

Part of the fun of setting a Batman movie in the late 19th century is seeing new versions of classic Batman characters and while some big rogues don’t appear, such as The Joker, a lot of re-worked characters do. Despite not appearing in the comic, the star of the film just might be Selina Kyle who never suits up as Catwoman but is ferocious in her quest to track down the killer of young women and voiced superbly by Jennifer Carpenter. We also have an Irish nun version of Leslie Thompkins, a prostitute Poison Ivy, a pre-Solomon Grundy Cyrus Gold, a young Harvey Dent who’s described as “a regular Jekyll and Hyde”, all three Robins as Oliver Twist-style street urchins and a great imagining of Hugo Strange whose psychological insights are invaluable to Batman’s investigation. Strange is also played for humour with his antiquated knowledge being obviously wrong including his claim that humans can survive speeds up to 35mph. There are also some fun references to Bruce being trained by both Houdini and Sherlock Holmes. Like ‘The Batman Vs Dracula’, a lot of my love towards the film is due to the parallels between the nocturnal hero and the main antagonist, in this case Jack the Ripper. Jack acts as Batman’s terrible mirror and Batman is easily confused with The Ripper in the eyes of Gotham’s citizens who only see dark shadows dispatching people in the night which causes Bruce to debate Batman’s image and nature. Bruce, voiced by Bruce Greenwood, is actually captured and imprisoned in Blackgate after being wrongly accused of being Jack the Ripper but he refuses to come forward and reveal he is actually Batman. He believes Gothamites would not know the difference and deem him insane either way. Bruce is also certain that in this time of supernatural belief that Batman must always remain a mystery and putting a human face beneath the mask would destroy his creation. It is a fantastic moment when you realise that Bruce is willing to go down for the crimes he has tried so desperately to stop so not to lessen the legacy of Batman.

As well as falling in love with the film’s themes and story (my favourite Batman tales are mysteries), Gotham by Gaslight also looks fantastic. The city shots over the opening credits don’t look the best which made me initially question the quality but after that brief snafu the film started to look beautiful. I don’t think I’ve ever seen fire look as good as it did here and the zeppelin action set piece at the film’s mid-point is a standout as a big confrontation between hero and villain but also because it looks incredible. We see Batman and Jack fight on top of the police airship and at times they are nothing more than silhouettes backlit by moonlight and director Sam Liu nails these fights with the brutality but fun inflections they deserve. This is not to say that the film is not without issues but they are few and far between. I wish Batman was kept in shadow longer early on in the film. In his first scene he quickly steps out of the fog and we see his full costume in a well-lit shot whereas I would have liked him to be bathed in darkness and kept mysterious for much longer. I also wish we saw more of Batman as a detective. He does some sleuthing but in the end he (literally) stumbles onto the evidence that reveals Jack the Ripper’s true identity. Speaking of Jack the Ripper, I think there probably should have been at least one more suspect but overall, I think the mystery works, although once Jack is revealed he does monologue about his motives for a little too long.

It may be a bold statement but I believe Gotham by Gaslight is the best Batman movie in a decade. The film feels quintessentially Batman and yet refreshingly different at the same time and I’d love a sequel. As someone who has been disappointed in the DCEU so far, I’d love for that film series to go in a direction of Elseworlds with more one-off features exploring unique takes on the characters and the in-development Joker movie could take the franchise in that direction. I’d love to see a live-action Gotham by Gaslight but right now I’m quite content with this animated gem. A Gotham by Gaslight video game would also be incredible but that’s an article for another time; maybe even next week.

Have you seen Batman: Gotham by Gaslight? Did you enjoy it as much as me? Let me know in the comments and geek out with me about TV, movies and video-games on Twitter @kylebrrtt.