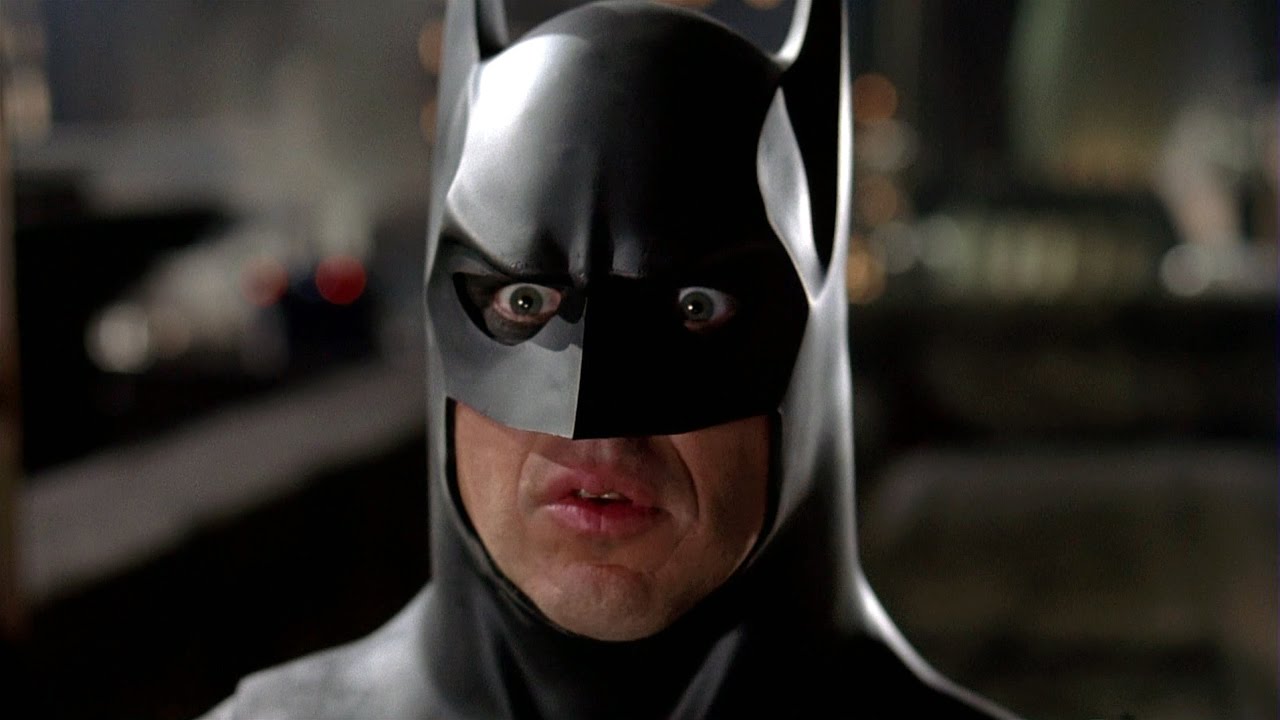 On the third of June earlier this year, Warner Bros released the Burton/Schumacher series of Batman films on 4K Ultra-HD Blu-ray, and, as an avid fan of this growing home entertainment format, I snatched them up. Not all of them of course, I’m not a crazy person. I bought the first three and left my shelves clear of Batman & Robin. Okay, so maybe I am a little crazy because I’ll still buy it but I’m waiting for a price drop. I’d not seen the films in a few years but remembered enjoying them and they all look truly incredible in this newly remastered format. 1989’s Batman is of course a classic, but when I sat down to watch Batman Returns, I was shocked. Much like I remembered, I enjoyed the film greatly but what shocked me was that it wasn’t a Batman film. You’d think so from the title. You’d think so from the characters. But I swear, it’s not.

Batman Returns is a dark gothic German Expressionist fantasy horror comedy film, with The Penguin as the lead character, Selina Kyle/Catwoman as the supporting and Batman in the background, not having a plot or direction of his own and doing very few ‘Batman things’. And I kinda love it. It’s wonderfully weird and dark and surprisingly funny. It’s a great movie, but a bad Batman movie. “But why doesn’t this make it a good Batman movie? Why can’t this just be a different interpretation of the world and characters? Tim Burton wanted to create his own version of the character, and so why is his version any less valid or relevant than any other?”, I hear you cry. Well, it’s less that Tim Burton wanted to create his own version of Batman and his mythos, and more that he just didn’t want to make another Batman movie. And so, he didn’t.

Of course, this all started in Burton’s first Batman film in 1989. The Joker is that film’s main focus, as Jack Nicholson’s top billing suggests, and Batman is an almost supporting character. Burton is interested in freaks and outcasts, just look at his body of work, and so it’s no small wonder he latched onto The Joker. Even his Bruce Wayne is an outcast and weirdo; a social recluse who’s rarely seen and his tragic past isn’t public knowledge. Very different from the socialite playboy persona Wayne usually upholds in the comics and subsequent adaptations. You could argue that after The Joker, the film’s secondary focus is on Vicki Vale and Harry Knox, reporters for the Gotham Globe, rather than Wayne/Batman. Vale in fact investigates Bruce Wayne more than she does Batman; he’s the true enigma of the movie. Burton’s true passions are apparent in his first Batman film but it’s still very much a Batman film, and a good one at that. It’s got all the trappings: from Batman stopping random crimes and criminals, the conflict between Bruce and Batman and what he reveals to whom, gadgetry, a clear goal, arc and direction, and a relationship with the villain. When it came time for a sequel – the next instalment of this now Oscar-winning and box office-dominating Batman franchise – Burton was uninterested. It’s clear he wasn’t very interested in Batman when making the first film, so returning to that character must have felt like an irksome task. Burton was then eventually persuaded to make the film, given that he had much more creative control and could replace the screenwriter with someone more inclined to his sensibilities. So, with plenty of money and almost complete control, Tim Burton went off to make this Batman movie that he didn’t want to make in the first place. And he followed through with that. He didn’t make one. Batman Returns isn’t a Batman movie, or at least not a particularly good one.

Burton had managed to squeeze what little freakiness he could out of the Bruce Wayne/Batman character in the first film and so doesn’t even bother in the second. Batman has no direction or conflict. It touches again on him wanting to reveal his true persona to Selina Kyle/Catwoman, drawing parallels between the two characters, but it’s very minimal and simply a poor retread of his relationship with Vicki in the first film. At one point he’s framed for murder and has to contend with Gotham believing he’s a villain, which is a truly fascinating idea that is explored in many comics and animated TV episodes and films, but the concept isn’t explored at all in Batman Returns. Batman is side-lined, has very little screen time and only investigates the film’s villains because that’s what needs to happen for the plot to continue. Even the villains don’t want him around, and not in an interesting way. In a way that makes it seem that Batman is just a mere annoyance and keeps meddling with the main plot of the film. Burton has said that Batman’s limited screen time reflects the enigmatic nature of the character. That’s one way to spin it but you still need an arc for Batman. Some sort of character insight. Hell, just something for him to do. Returns doesn’t offer anything in that regard and makes it clear just how uninterested Burton is in the character of Batman. The film’s focus is purely on the villains and it’s possible to do that and still keep that Batman flavour. Just look at the television series Gotham. It’s not a great show and the quality drastically changes episode-by-episode, scene-by-scene, but it still has that almost indescribable Batman feel, even though the caped crusader doesn’t appear until the final episode. Danny DeVito plays Oswald Cobblepot/The Penguin and gives an incredible performance in Batman Returns. The character himself is nothing like his comic-book counterpart, but instead created purely by Burton and his love of movie monsters. He’s a classical villain, inspired by Frankenstein’s Monster and Nosferatu. A freak of nature, visibly frightening with exaggerated and deformed features. A character who just wants to be loved but is branded a monster and therefore acts like one, seeking revenge on Gotham’s citizens. His journey is the film’s primary plotline, regardless of Batman’s involvement, as he blackmails and lies on his quest for love and power, and his eventual collapse and return to the sewers where he plots his vengeance.

DeVito’s Penguin fits perfectly into Burton’s German Expressionist styling of the film. In fact, the whole film feels like Burton tricking the studio and using the money for a Batman movie to make a very expensive ode to that distinct and influential cinematic art style. It’s a passion project fan film faintly disguised as a comic-book blockbuster. The 1989 film had gothic roots and Gotham looked like – to quote screenwriter Sam Hamm – “Hell erupted through the pavement and built a city”. The Art-Deco styling won a well-deserved ‘Best Art Direction’ Oscar for Anton Furst but Batman Returns’ Gotham is a different beast entirely. It follows German Expressionism to a tee with the high architecture, monumentalism and sharp angles shot in a distorted and disorienting way. The shot selection, editing, colours and costumes also give off a 20’s styling that feels completely different from the first Batman film. It feels more of a spiritual sequel to Fritz Lang’s Metropolis than a direct sequel to Batman. Every film has its influences but Returns aped its influences so much it simply stopped being a Batman movie.

Catwoman is also a villain in the film and her scenes are enjoyable, if not slightly meandering. Again, there’s a great performance behind the character – which too differs from the comic – but what’s her goal exactly? She flip-flops into whatever position the plot requires, from crime-fighting to simply causing havoc, teaming up with Penguin, wanting Batman dead, wanting Penguin dead, and then remembering she also wants the character of Max Shreck dead because he threw her out of a window and ‘killed’ her at the beginning of the film. She only tries to kill Shreck at the end of the film after days of random department store break-ins and some light vigilante work. It’s like they wanted the character in the film, decided on a unique origin and performance, made a cool costume and nailed the physicality, but then struggled to fit her into the story. They do give her a fleeting romance with Bruce Wayne but it just feels generic and something they did just because that’s the thing to do. The film definitely suffers when Penguin isn’t onscreen.

But that’s not to say there aren’t glimmers of a good Batman movie hidden in all the gothic darkness. Forget Catwoman and Penguin, it’s the original character of Max Shreck (named for Nosferatu actor Max Schreck) who’s the villain that most feels like he belongs in a Batman film. He’s in the vein of a Roland Daggett; a corrupt businessman fuelled by greed. It’s a very ‘Batman’ character, and the performance and casting of Christopher Walken feels very ‘Burton’. Together it’s a good mix of the two, but too much of the film leans towards Burton’s sensibilities. There’s one particularly good Batman scene with Bruce and Alfred talking about repairing the Batmobile before taking a slide down to the Batcave and then interrupting Penguin’s speech with a recording of him confessing his true motives. I also enjoy the scene at the dance where Bruce and Selina discover each other’s alter egos, even though I feel their relationship falls flat for the most part. And yet, despite all I’ve said, I do greatly enjoy the movie. It’s good fun with a dark sense of humour and an incredible sense of style and atmosphere. It’s a wonderful fantastical comedic action-drama with brilliant characters and acting that is a joy to watch. A unique experience that I’m so glad exists. But it’s not a good Batman film. Not at all. It’s one of my favourite Tim Burton movies, and it’s certainly one of the most ‘Tim Burton-y’ movies out there, but it’s lacking in the qualities of what makes a Batman movie a Batman movie. Hell, it’s a better Christmas movie than it is a Batman movie. Batman Returns? I wouldn’t say so.

So, just how wrong am I? What are your thoughts on Batman Returns? Let me know in the comments and geek out with me about TV, movies and video-games on Twitter @kylebrrtt.