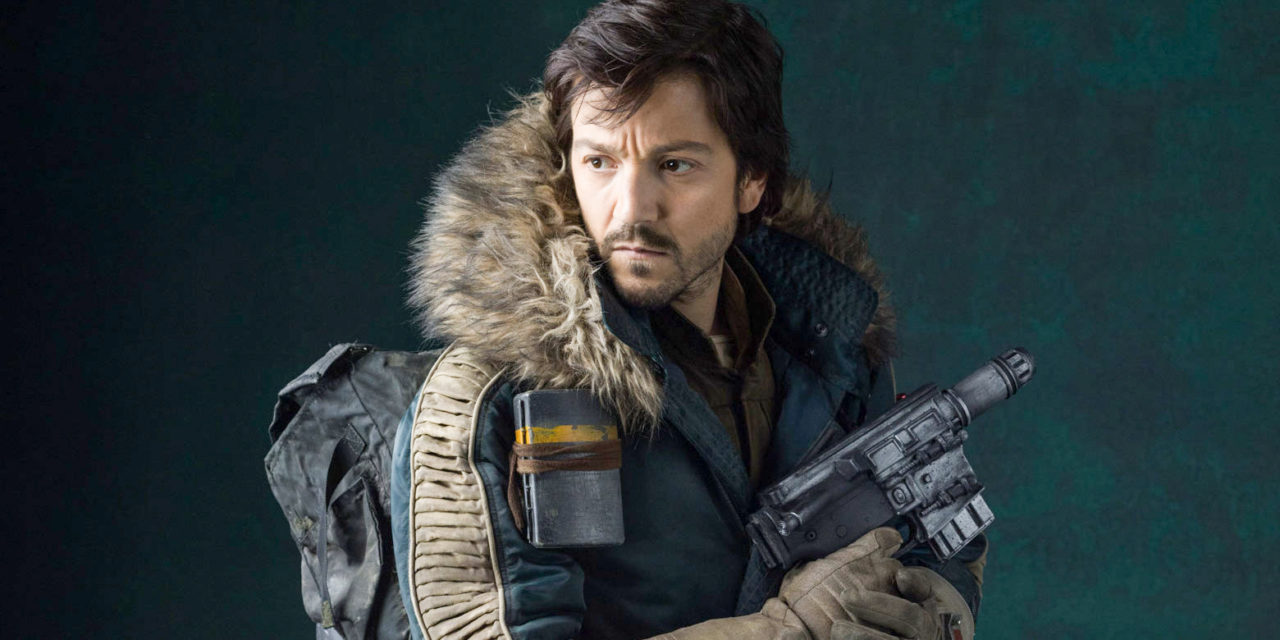 Could The Star Wars Rogue One Prequel TV Series Also Be A Solo Sequel?

Why Solo should be the Cassian Andor series' first port of call for connections to the wider canon.
by Kyle Barratt 21/01/2020

Whereas The Mandalorian in its first season could explore a fresh chapter in the ever-expanding saga of Star Wars, the upcoming Rogue One prequel series – focusing on Cassian Andor’s cloak-and-dagger activities for the Rebellion – is quite the opposite. The time period between the prequel trilogy and the original films is ludicrously packed with canon stories that the as-of-yet untitled Cassian show will be squished up against, like rush hour on the Tokyo subway. This could be both a blessing and a curse, with new stories potentially limited to fit in with what we know from the novels or Star Wars: Rebels etc. Or the wealth of established characters and events could be used to weave an intricate tale that not only works alone but supports and improves every other story it shares close proximity to, without falling into ‘fan service’. It pains me to type that overused and misused phrase so I thought I’d get it over with early in this article. Just don’t get me started on the misuse of ‘plot hole’! There’s one canon story that I hope this Rogue One prequel does connect to above all others and, while you may not consider it at first, I think it makes perfect sense to do so. I’m talking about Solo: A Star Wars Story. In several ways, Solo was a failure. The production is infamous for the director firing and resulting reshooting of a large portion of the movie, the box-office was considerably lower than expected and personally, while I don’t think it’s a bad movie, it’s one that fails to excite me all that much. So, a straight-up Solo sequel is out of the question, but I don’t think its ultimate fate should be as a standalone adventure. Or at least how much a film tying into the greater continuity and acting as a prequel to one of the saga’s most pivotal characters can be standalone. The lingering questions and fates of new characters can always be answered and continued in the books and comics for those mega fans – my brethren – to experience if they so desire, but I think these actors deserve better and that their continued adventures can exist onscreen. Just on the small screen rather than the big screen. Don’t get me wrong, first and foremost this should Cassian’s show, focus on telling new stories and, where possible, help set up the events of Rogue One but I think there’s ample – and logical – opportunities to continue the storylines that Solo set forth. Let’s take a look at how these characters and open-ended plotlines could be naturally weaved into the Cassian Andor series starting with Enfys Nest. While I find Solo to simply be that Star Wars film that exists, I love Enfys Nest! Yes, she has an awesome costume, speeder and weapon, as well as one of the most memorable music themes of the film, but I like how she represents the growing Rebellion. With the series set an estimated 10 years after the film, the rebel cells will now be starting to come together and form the alliance we know and so it would make perfect sense for Cassian – who receives orders from the Rebellion leadership – to witness Nest’s rebel cell of Cloudriders become a part of the greater whole. The character’s appearance would not only simply be cool because she’s a badass character but also show how the galaxy is shifting towards open revolt and – with the Cloudriders being mistaken for common criminals in the film and the fact that some of them, like Warwick Davis’ Weazel, once were just that – it’d be fascinating to see the oppressed and downtrodden ordinary citizens and guerrillas of Nest’s group have to join up with the political and military arms of the Rebellion that we see elsewhere in the canon. The Rise of Skywalker reminded me just how much I enjoy Lando. Seeing Billy Dee Williams onscreen as the character again was a joy and Donald Glover’s performance in Solo as a younger version of the character was a highlight of the film. Sure, unlike Enfys Nest Lando doesn’t jump out as being a character that might fit in Cassian’s world of the Rebellion and the Empire, but I think the criminal elements of the Star Wars galaxy should be just as important to the story considering the time period. With the growing Rebel Alliance and the reigning Empire locked in a cold war before it heats up in Rogue One, our rebellious heroes need to stay off the grid and Cassian, as we saw in his introduction in the movie, does bad things for the greater good. What better way to show the lengths the Rebellion has to go to in order to survive and how morally ambiguous Cassian is than have them have to strike a deal with some detestable criminals, possibly Jabba, and where there’s criminals Lando isn’t far behind. It would be fascinating to see Lando at this point in time. He’d be Falcon-less but maybe friends with Lobot, and we could see him halfway through his transformation from the smuggler and card shark he was in Solo to the magistrate trying to do good in The Empire Strikes Back. There’s precedent for his appearance too. Lando appeared in a couple of fun episodes of Star Wars: Rebels and had an enjoyable rapport with Hera, a rebel operating out of the same base as Cassian. If Cassian is in need of a criminal contact or a ride to some unsavoury place then Hera suggesting Lando makes perfect sense. In keeping with the galaxy’s criminal element, Maul and Qi’ra are the biggest lingering question mark of Solo and the one I’d most like to be continued. If we never see Enfys Nest or this version of Lando, Han or Chewie again then fair enough, we’ve seen what we’ve needed to see of them, but Maul and Qi’ra demand resolution. The film leaves Qi’ra inheriting an important position in the Crimson Dawn criminal syndicate and discovering – along with the audience – that it’s being run by former Sith lord Maul on Dathomir. This is an interesting place to take Maul as a character and, while the upcoming seventh season of The Clone Wars may hint at how after his rule of Mandalore he became an intergalactic mob boss, we still have no answer as to how by the time of Star Wars: Rebels Maul is a broken man living destitute on Malachor. While the Andor series is likely to be set concurrently with Rebels, I think there’s enough wiggle room for the series to be set slightly before the season 2 finale in which we first see Maul and therefore give us these answers. This hope for the series may be unlikely but the Rebellion having dealings with Crimson Dawn could make sense, particularly with Cassian’s attitude at this point in the timeline, and now that Maul has been reintroduced to live-action Star Wars, no doubt confusing general audiences, I think the character should be greater explored in that format. And while we know Maul’s ending, but just not how he gets there, Qi’ra is currently a character without an ending and I’m intrigued to know what happened to her after meeting Maul on Dathomir. So then, the big one: Han and Chewie. Quite simply, no. I don’t see a way to logically include the space-faring dynamic duo in the Cassian Andor series. Yeah, I’ve reasoned that other characters from Solo could appear because of the show’s possible link to the criminal element of the galaxy but Han and Chewie are a step too far. It would be that damned term ‘fan service’ and as someone who found Han’s link to Enfys Nest’s cell of rebels a little too much in Solo, having him come into contact with the Rebellion this close to the events of A New Hope is a big no-no. The only issue is that if Qi’ra appears in the show then it would make sense for Han to be a part of her story but, if the Cassian Andor series is the place to tell that story, then I think his appearance could upend the series. Chewbacca by himself is more of a possibility, especially considering he knew Yoda and Ahsoka but seemed to keep his mouth shut about both of the them during the original trilogy. It could be that similarly he’s come into contact with Cassian and the Rebellion before A New Hope but kept it to himself.

In the end, could the Rogue One prequel also be a Solo sequel? Not a sequel exactly but in the interconnected web of Star Wars canon I think the Cassian Andor series should pluck characters from Solo more than most other canon sources. I think their stories have yet to be completed and some supporting characters, such as Enfys Nest and maybe even Lando, make perfect sense to appear in the show. And others I’m maybe trying to too hard to connect because I desperately want resolution, but I still think there’s a small chance they could appear. But first the Rogue One prequel needs to focus on its own characters and telling its own story and then, when its successful, future seasons could branch out and pick the best elements of the wider canon to aid its own storytelling. Although Solo’s Therm Scissorpunch should absolutely appear in every episode.

Do you think the Rogue One prequel could also act as a Solo sequel? Or is this all the insane ramblings of a fan? Let me know in the comments and be sure to geek out with me about TV, movies and video-games on Twitter @kylebrrtt.