How a single episode of Batman: The Animated Series made me appreciate Harley Quinn like never before.
by Kyle Barratt 05/01/2021

I’ve never really liked Harley Quinn. Growing up I was exposed to the character through different mediums, without the clear character progression that other older fans who were there for the birth of Harley in Batman: The Animated Series had. The video game Arkham Asylum was my introduction to the character, followed by the odd comic book, random episodes of the animated show, and then eventually the current versions seen of film and TV. While I’ve never hated Harley, the large cult obsessed with the character – a former Arkham psychiatrist turned the Joker’s girlfriend turned independent antihero – always seemed strange to me. While entertaining in short bursts, Harley often struck me as obnoxious and annoying, and after seeing so much of her in recent years I didn’t think this would change. Yet it has. 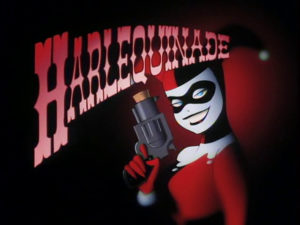 Recently I’ve been watching Batman: The Animated Series, many episodes for the second or third time, but some others have managed to slip through the cracks and, joyously, I get to watch episodes of that brilliant show that I’ve never seen before. Harlequinade was one of them. It sees the Joker threaten Gotham City with a stolen atomic bomb, forcing Batman to work with the clown price of crime’s imprisoned lover Harley Quinn, who’s promised freedom in return. Batman and Harley travel the city together, stopping of at the Joker and Harley’s old haunts on the trail of the treacherous weapon, all while learning more of Harley’s damaged past and in the shadow of the inevitable double cross.

The character of Harley Quinn was created for the series by Paul Dini back in 1992 and I’ve seen the episode of her first appearance a couple of times. While it’s very good, it presented Harley as nothing more than a henchwoman and squeeze for the Joker. It’s Harlequinade that changes that and, over 25 years later, it still managed to change my opinion on Harley Quinn despite me having seen so much more of the character that has been created since. This is the first and best time that Harley has broken free and become the author of her own story. In the episode she’s not controlled by the Joker or moulded by Poison Ivy. While she’s done this many times since across all media – a lot of which isn’t bad – it’s never been as potent as it is in Harlequinade. This show fills 22-minute episodes like none other. Harley’s never going to out crazy the Joker and so she’s naturally backgrounded when in scenes with him, especially when that Joker is Mark Hamill. While their relationship can be entertaining, she works best when she’s out of his large shadow, and yet in films like Birds of Prey where Harley is the lead character, I can grow irritated with her long before the credits roll. She needs a partner. Someone to bounce off and share a fascinating dynamic with – something the series did already with Poison Ivy. Although it’s Harlequinade in which she’s paired with the perfect character: Batman. It may be the funniest episode of a DC animated show I’ve seen and Harley is hilarious when playing off Batman – the ultimate straight man. Dini’s dialogue is sharp and he writes one of the most cartoony episodes of the series with brilliant sight gags and slapstick humour. I don’t think Harley has ever been funnier.

The trail of the Joker takes Harley on a trip down memory lane as she brings Batman to an early hideout she had once used with her beloved clown prince of crime. She reveals her history to both us and Batman. “When I was a doctor I was always listening to other people’s problems. Then I met Mr. J and someone listened to me for a change”. Her journey from psychiatrist to psycho has been told several times since, including later in the series with the episode Mad Love. What’s so good about this brief revelation is that it’s Harley telling the story from her perspective. It’s not a manipulation by the Joker or, God forbid, an agency-destroying bout of electroconvulsive therapy like in Suicide Squad. No, this path was Harley’s choice and she got what she wanted by choosing it. It makes Harley a much stronger character. I’ve always been a little creeped out by people who #relationshipgoals the ‘romance’ between Harley and the Joker. Their relationship is clearly one of violence and abuse. Thankfully, Harlequinade acknowledges the horror and toxicity of their relationship, as well as the twisted sense of love, in one of its best scenes. After bursting into an underground casino, Harley distracts some gangsters with a rendition of Dorothy Shay’s Say That We Are Sweethearts Again from the musical Meet the People. I was shocked to discover that the lyrics weren’t altered for the episode to make them specific to Harley and the Joker. All the references to disfiguring faces, acid, violence, and attempted drownings are in the original song and yet fit this fictional comic book relationship perfectly. It’s disturbing and funny and sexy. It’s Harley Quinn.

It’s not just the choice of song that made me grow to like Harley more but the scenario in which she sings it. At first, we think she’s betrayed Batman and sided with the generic gangsters – a predictable double cross – but that’s just what she wants everybody to think. Harley is actually biding time until Robin appears to save them both. She uses the song and her sexuality to distract everyone, fooling them into thinking she’s just some dumb blonde there to perform for everyone. She’s sexy but not in the fetishised way of Arkham games, with the exaggerated boob wobble and preposterous outfit, or the leering cameras watching her change in Suicide Squad. She’s acting like this for a reason, tricking them with their own false assumptions. Including me on first viewing. I underestimated Harley Quinn as a character, but no longer. However, the double cross does happen for real when Batman and Harley finally catch up with the Joker at Mayor Hamilton Hill’s house, but it doesn’t take long for Harley to change sides again. The Joker devised a plan to blow up Gotham but wasn’t planning on saving Harley first. Gotham’s destruction would mean death for Harley’s supervillain friends, as well as her pet hyenas Bud and Lou, and that’s why she turns against him: because she still has a heart. She cares about her friends and pets. She’s shown not to be psychopathic like her Arkham roomies but empathetic. Nor is she the usual femme fatale character on the show, like Talia or Selina. She uses her wits and charm and heart. On the precipice of this decision, Batman reminds her of a piece of information but that’s it. She doesn’t need lecturing by another character. She rebels against the Joker by her own accord.

When the bomb is disarmed (after a battle with a WW1 biplane for some reason), Harley and Joker find themselves in a fire-lit final confrontation. Harley fights through tears as she holds a gun to the Joker’s head and pulls the trigger. A final joke: it’s a fake gun. But the intention was there. Harley didn’t know it was a fake and had actually decided to kill the Joker, which is such a bold move by Dini and powerful for Harley as a character. In a wonderfully disturbing moment, the knowledge that Harley would have killed the Joker reignites the twisted lust between the two of them and they embrace, returning us to the series’ status quo. While I wish they didn’t get back together, that relationship is needed for the continuation of the show. Thankfully, as with before, there’s no manipulation to Harley’s actions and she chooses to continue the relationship.

I never really liked Harley Quinn until I watched Harlequinade for the first time. While I’m still no fervent fan of the character, I’ve gained the appreciation for Harley that had always escaped me. There remain aspects of modern incarnations of the character which I dislike but some of the other Harley Quinn stories I’ve read, watched and played over the years may be due a re-evaluation now that I have a newfound love of the character. I’m eager to continue watching Batman: The Animated Series in the hope that there’s another Harley Quinn episode that I haven’t seen before, but regardless, Harlequinade now sits upon my list of the top five episodes of the show, and I consider it to be Harley Quinn’s finest hour (or 22-minutes).

How did you fall in love with Harley Quinn? Which is your favourite story featuring the character? Let me know in the comments, speculate responsibly and be sure to geek out with me about TV, movies and video-games on Twitter @kylebrrtt.