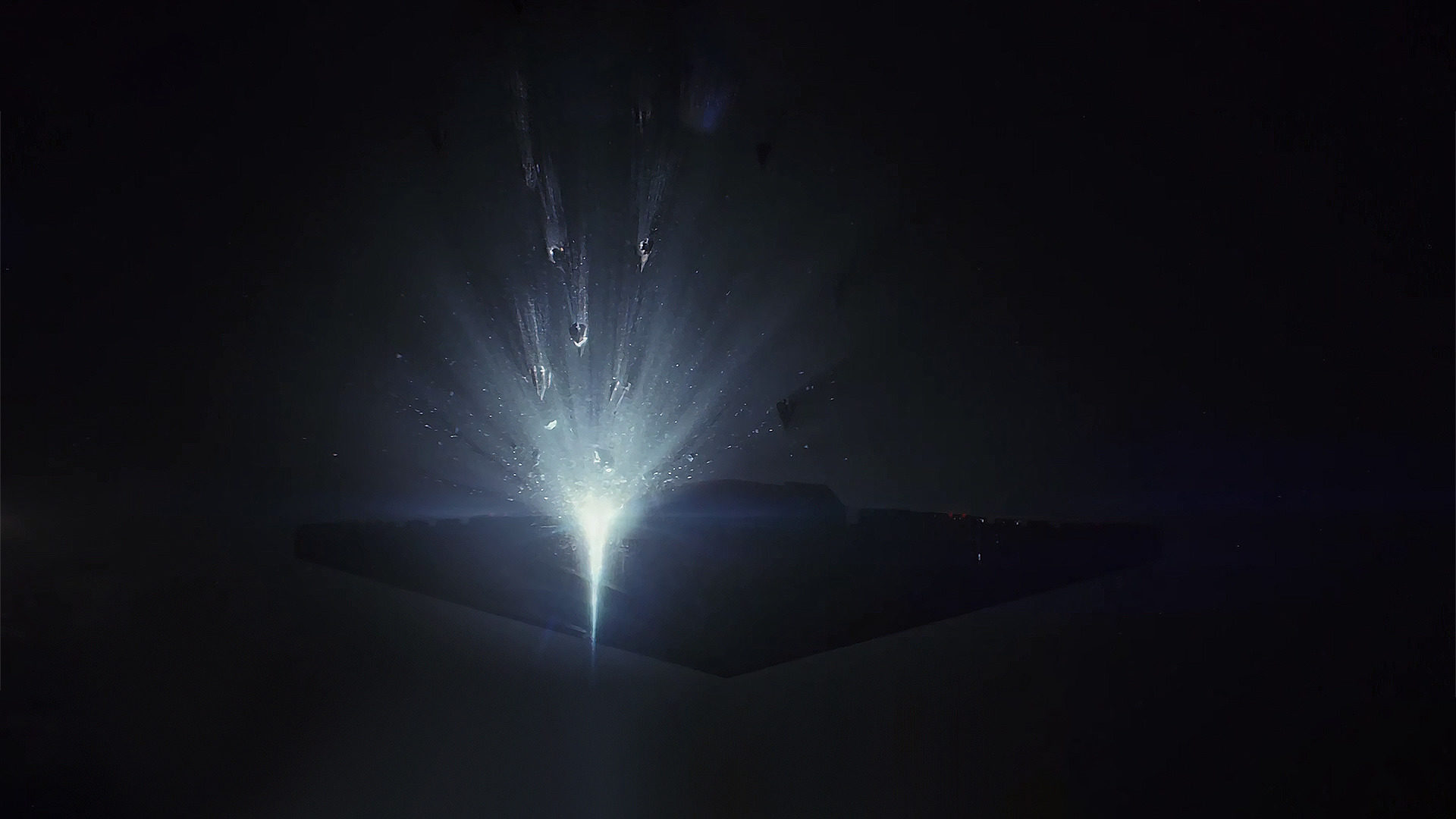 The Star Wars franchise has some of the most famous sound effects and music ever produced, so it’s a bold choice whenever it instead embraces silence. It’s surprising how often John Williams’ iconic music disappears from the films to allow the sound design to tell the story, whether the calm before the storm in Echo Base, the pulsating engines of a podracer, or the hum of dancing lightsabers. But eliminating all noise entirely is rare – and very risky. Without the special sauce of John William’s score or Ben Burtt’s sound design, Star Wars has managed to create some incredible muted moments, albeit few and far between. Let’s look at three very different uses of silence in Star Wars, from the popular and controversial, to the forgotten and underrated.

The Holdo maneuver is one of the most contentious moments in all of Star Wars, and, in my opinion, is the best scene of the sequel trilogy. In fact, it’s one of my favourite moments across the entire saga. I love it. At the height of tension, with all storylines hitting their peak and coming together in a single moment after a disparate 90 minutes, Holdo rams the Raddus at lightspeed into the First Order fleet – a move the arrogant Hux never saw coming. We witness devastating and beautiful destruction yet hear nothing. The music builds beforehand and then suddenly a sharp silence before the inevitable explosive bang, delayed to allow audiences to gasp and, in my screening, someone to say, “that’s pretty cool”. It’s as if we’re far away and the sound only hits us afterwards; space sounds in Star Wars wonderfully continuing to never make scientific sense.

I get goosebumps every time I watch it, whether on an enormous IMAX screen or even just now on my phone (sorry David Lynch). While the music and sound design of Star Wars are iconic, so are the visuals encountered in a galaxy far far away. As CGI becomes ever easier and the series expands across television, film and video games, showing us something we’ve never seen before in Star Wars is becoming harder and harder. The Holdo Maneuver is praised for its shocking use of silence but its visuals are awe inspiring. Pure white light tearing through a fleet of evil dark ships. It’s incredibly beautiful and, unsubtly, symbolic – but since when was Star Wars known for subtlety? In a landscape of muddy DC movies and samey instalments of the MCU, the Holdo Maneuver is one of the greatest modern moments of pure cinematic spectacle.

The hush of Holdo’s sacrifice is reminiscent of an earlier use of silence in Star Wars: the seismic charges from Attack of the Clones. While The Last Jedi holds truly mixed opinions in the fandom, from masterpiece to abomination, Attack of the Clones is consistently placed low on the franchise’s endless rankings. It was the Star Wars film of my childhood. The one all my favourite toys were from. I love it; yet if I were to try and be as objective as possible – a difficult task – it does hover around the bottom of my personal list too. But I task you to find the most diehard of prequel haters who won’t admit that Jango Fett’s seismic charges are pretty dang cool. Attempting to eliminate Obi-Wan in the asteroid field above Geonosis, Jango and a young Boba fire seismic charges, which create one of the most satisfying sound effects in all of Star Wars.

The thunderous explosion the charges produce is preceded by a split second of complete silence, punctuating the eventual deafening boom and making them seem monumentally dangerous. They eliminate all sound before exploding, and not just the diegetic sound but non-diegetic too, as if the charges are so powerful that they’re disrupting the very nature of the film itself. The prequels had such brilliant sound design, something lacking from the sequels. I’m sure some of it is subjective nostalgia for my childhood films but, other than the lightning on Exogol, the sequels are lacking in terms of sound. Seismic charges had been absent for too long, and while firing them in Battlefront 2 was fun, their reappearance in The Mandalorian was a brilliant moment. Here’s hoping that the Slave 1’s armoury is full and they return in The Book of Boba Fett.

When you title an article “Silence in Star Wars” there’s no way you can’t talk about the Holdo maneuver, and the sound – or lack thereof – of the seismic charges is well loved, but the main reason I wanted to write this article is to highlight a lesser known scene in an episode of The Clone Wars. A scene which I’d completely forgotten about and surprised me on my most recent rewatch, something the show consistently achieves. The first season episode ‘Liberty on Ryloth’ features Mace Windu storm a Separatist-held city on, you guessed it, Ryloth and attack battle droids on a light bridge. It’s a fairly standard action scene for the show but what happens next is anything but. The droids switch off the bridge leaving Mace and his clones in freefall. As the bridge disappears, so does all the sound.

We’re used to hearing an ephemeral hum when Jedi focus the Force but we’ve never experienced it to this extent. The bridge disappears and Mace envelops himself in the Force, pushing his clones to safety before jumping on several different vehicles, including a droid-occupied Single Trooper Aerial Platform, to reach terra firma himself. While this takes place, all we hear is a rumble in the background and what sound effects remain are heavily muffled. It’s as if the viewer is granted access to Mace’s mind and he meditates in the middle of the action to eliminate all distractions, including noise. We experience Jedi focus on a level we’ve never seen before. It’s not only just a cool badass action scene but it also feels like a meaningful moment for Mace and our understanding of him. It’s a chance to allow Mace to show us his Jedi prowess at the start of the war, before he’s changed irreparably. The prequels and The Clone Wars present us with a manipulated Jedi Order that have lost their way and pay the ultimate price. Mace represents this more than any other single Jedi. He’s a personification of the consequences of Palpatine’s machinations. By the end of the war he’s bitter. Angry with Ahsoka and her choice to leave the Order despite her actions showing that she’s more of a Jedi than him, title be damned. He begins the war stating that Count Dooku couldn’t organise an assassination because he was a former Jedi, and ends it in that exact same room with his lightsaber to Palpatine’s throat and the intention to kill. Mace loses his way and so it’s incredibly meaningful to see him perform such a powerful, classically Jedi feat in the series’ first season. The silence speaks volumes.

As Star Wars continues to evolve and new eras are explored, the score and sound design will develop alongside it. Ben Burtt’s legacy continues in Matthew Wood, David Acord and new employees of Skywalker Sound, and new composers such as Ludwig Goransson are taking bold steps into a new Star Wars soundscape in the Disney+ shows. Yet despite sound and score continuing to be a key part of Star Wars’ success, I hope the franchise once again embraces silence and creates some more unexpected moments that rank among the franchise’s best.

What are your favourite moments of muted Star Wars? Dare I ask what you think of the Holdo Maneuver? Let me know in the comments and be sure to geek out with me about TV, movies and video-games on Twitter @kylebrrtt.