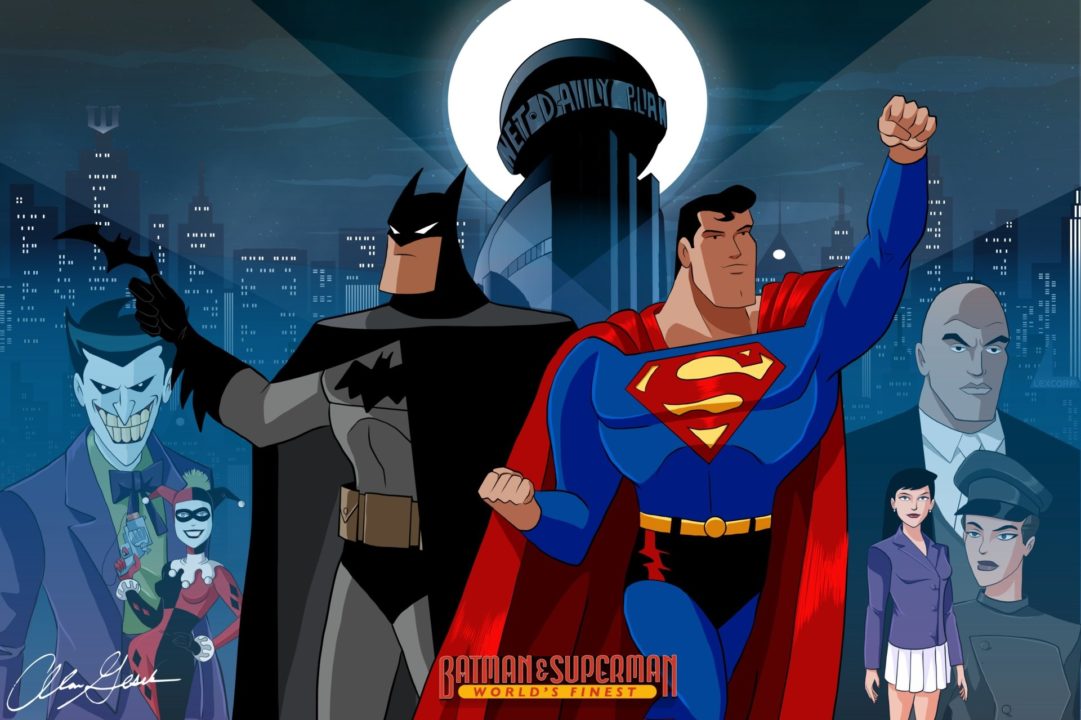 The three-episode arc from Superman: The Animated Series, edited into a film, delivers a crossover event more impressive than even those seen today.
by Kyle Barratt 25/01/2022

Across film and television today, every superhero property is connected to another from its inception. Shared universes dominate and, I admit, it’s enjoyable to see a large storytelling tapestry weaved across multiple series and films. But this does have a downside, something that was made apparent to me when I recently watched the first crossover between the 1990s Superman and Batman animated shows. Because every modern show is connected, they rarely feel distinct. The world has to be the same in each and so any crossover lacks impact; it doesn’t feel as if anything is dramatically crossing over, rather just straying casually from one to the other. That’s not the case with The Batman Superman Movie: World’s Finest, the three-episode arc of Superman: The Animated Series that was edited into a feature-length presentation, which is why it remains DC’s best TV crossover event 25 years later. Batman: The Animated Series is true landmark series in superhero television and defined the character for a whole generation. Its brooding atmosphere and dark visuals offered the perfect marriage of tone with character, and when the creators came to develop a Superman series they wisely decided to go in a different direction. The shows had to stand apart, have their own distinct identities that matched each title character. Despite sharing much of the same behind-the-scenes talent, the two shows were designed to be completely different in visuals and tone. When, halfway through the second season of Superman: The Animated Series, the two series combine for a joined adventure, it makes the crossover so impactful. Rather than just plot and characters intertwining, World’s Finest is two distinct forms coming together.

Other than sharing a flair for art deco, Gotham and Metropolis look like two different cities from two different worlds. They’re certainly not the twin cities of Batman V Superman: Dawn of Justice. Gotham’s night skies are a permanent dark red stain with the oppressive atmosphere of thunderstorms. The city is designed as an urban throwback, a retroistic feel combining the occasional modern touch with that of the 1930s. A place where televisions are still black-and-white. Metropolis on the other hand is bright and modern, almost futuristic, from its buildings to its cars. Superman’s city is day to Batman’s night, literally with its blue skies and puffy white clouds. The two shows are even drawn on different colour paper, Superman white and Batman black. So, imagine the shock and thrill of an episode of Superman: The Animated Series opening with a Dutch angled view of Gotham City. The three episodes continue to treat each show as a different entity, sticking true to the design of each depending on the location the action is occurring. After acquiring kryptonite in Gotham, the Joker and Harley Quinn travel to Metropolis and offer Lex Luthor a deal: $1 billion if they kill Superman. Both series utilise a similar structure of villain-led stories – having the antagonist be the key focus and push the plot forward while the hero reacts and responds – but we’ve never seen a villain like Joker in Metropolis before. Superman’s baddies are very different, usually corrupt business men, a dangerous technology, or a cosmic threat. They are never this fun or unpredictable. It’s great to see such a key piece of one series get plucked out and dropped in the other, completely derailing the usual formula. As is seeing Lex and Joker spend time together, the two representing their own shows. It’s an odd couple used to great effect; a dangerous combination but also a funny one.

The two series are, of course, personified by their eponymous heroes, and the crossover wastes no time is presenting them as very different figures. Not only are their personalities different (unlike the DCEU), Batman and Superman operate very differently too. Batman’s first scene paints him as a detective, working a crime scene, while Superman stops a hijacking aboard Air Force One, a scene only found in a children’s show pre-9/11. We even see their different relationships with the police: Batman antagonistic with Bullock while Superman works with Dan Turpin. They are true to their comics counterparts, making their conflict based on character rather than plot. Superman sees through Batman’s mask while Batman tracks Superman and discovers his identity. What begins as a rivalry develops into a genuine partnership as the two come to respect each other while the opposite is true for the villains, the fragile alliance breaking and Lex and Joker threatening to tear the city apart in their war. This mix of elements creates the two best scenes of the crossover. While Joker and Lex argue, Harley and Mercy fight it out in the background. Not only is it just a fun action scene and rivalry but it’s the best comedy beat too with much of the fight presented through sound effects in the background, while also allowing Mercy, a very serious character, to have a moment of levity – a crossover of tone as well as character. The other scene is Batman breaking into Lex’s bedroom and interrogating him in the middle of the night. The viewer is so used to the tame confrontations between Superman and Lex, where the villain always has the upper hand, that seeing Batman use his tactic of fear is a delight.

One element that doesn’t quite work throughout World’s Finest is Bruce’s romantic relationship with Lois Lane. I kept expecting there to be a twist, that this was Bruce’s way of getting close to Superman, but no, it’s a genuine relationship. It feels like the subplot was created for two reasons: give Lois something more to do than be the damsel in distress, which is fair enough, and create more tension between Bruce and Clark, which feels a little cheap. There is some interesting characterisation for Lois in that she loves both Superman and Bruce Wayne, but not Clark Kent or Batman, which is a fun idea, but it’s taken way too far and she plans to relocate to Gotham after just a couple of days with Bruce. I’m okay with a romantic interest for Bruce but time has to be dedicated to it because it’s such a big idea and counter to his usual state as Batman. It works in Mask of the Phantasm where it’s a key focus but not here as a side plot. Given that it was edited into a movie and sold as such, World’s Finest may be three episodes of Superman: The Animated Series but it was created to also be enjoyed as a standalone adventure. However, if you watch it in the middle of the show’s run like I did, it’s a hugely refreshing experience. I purchased the series on the recently remastered Blu-ray and binged it, which isn’t what I recommend doing. It’s fun but is definitely a lesser show than Batman: The Animated Series, which I could, and likely will, rewatch endlessly. Watching episode-after-episode becomes dull and this prime-time Emmy-winning crossover re-energises the series. I only wish that it was produced during the time of the OG Batman: The Animated Series rather than that of The New Batman Adventures because I much prefer most of the original character designs, especially Batman.

The crossover does what I was hoping Superman: The Animated Series would do for its entire run. Well, kinda. Part of what makes the show slightly tiresome is that it has a boring status quo, whereas Batman: The Animated Series will often mix up its storytelling with some creative risks. Across the four seasons of BTAS, new sidekicks are introduced, relationships change, and characters discover Bruce’s secret identity. STAS however doesn’t do that. Other than the rarely seen Kents and Lana Lang, nobody knows Clark’s secret and this is an issue. He can’t talk to anyone about his struggles and so there’s none of the vital identity drama that defines superhero storytelling. Superman needs people to bounce off to aid character drama but it doesn’t happen. Yet in World’s Finest it does, it just happens with Bruce instead, and it’s great. Instead of Lois discovering Clark’s identity, which should have happened in the series, she learns that Bruce is Batman in a dramatic moment and we get the conversation I always wanted her to have with Clark through the proxy of Bruce. It’s not perfect but I’ll take it. I don’t know what it is about Joker and planes but whenever they combine in the DC Animated Universe it’s a recipe for a great action climax. After several failed attempts on Superman’s life, Joker hijacks Lex Luthor’s huge experimental jet to rain terror on Metropolis and only the united Batman and Superman can stop him. There must have been a temptation to continue the Superman/Batman crossovers but, thankfully, this is a single adventure that will eventually lead to more. The rarity of the crossovers makes them more potent and while there are two more episodes in STAS’s third season featuring Batman, they are both very different stories. Both characters go back to their respective series at the end with no excessive connections lingering. Justice League will come but not for a few years yet. World’s Finest ends at dusk, the celestial meeting point of the two heroes as they depart. Superman of day, Batman of night. 25 years later, World’s Finest remains DC’s Best TV Crossover.

What’s your favourite DC crossover outside of the comics? Let me know in the comments and be sure to geek out with me about TV, movies and video-games on Twitter @kylebrrtt.

Tanked Up 299 – The Company of Darkness

My guide to tackling the February of open worlds