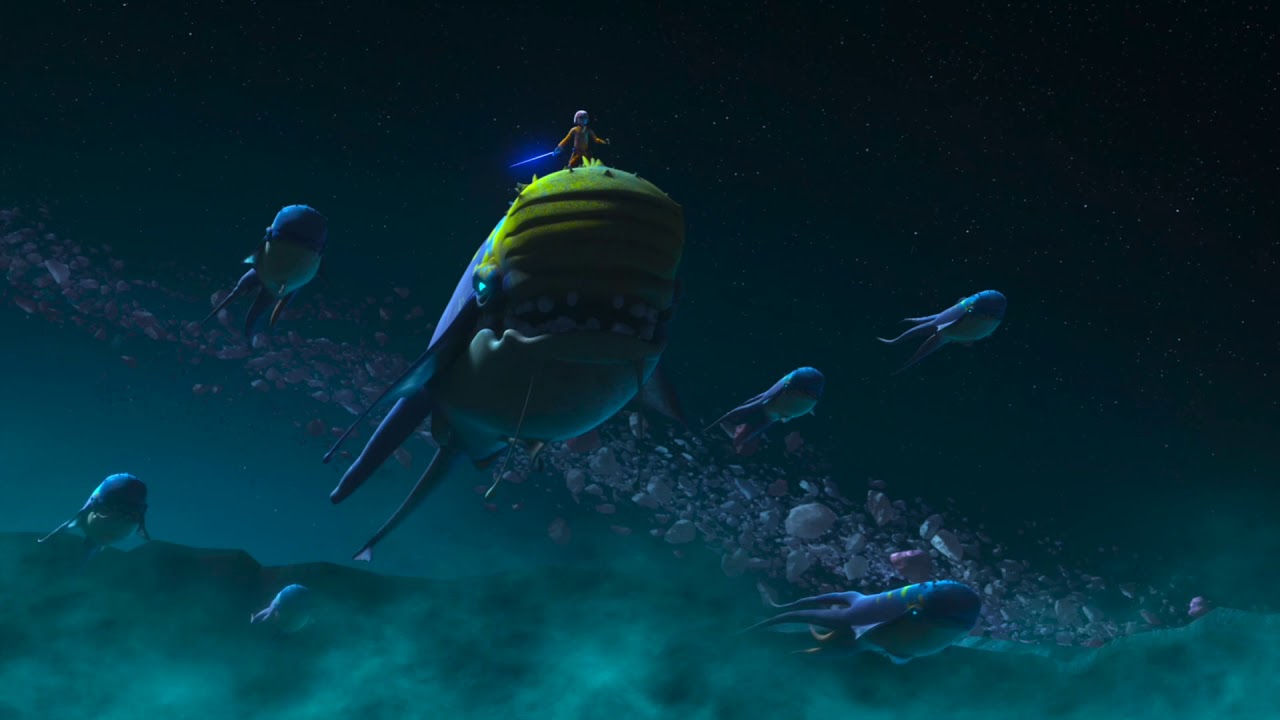 Why The Call is One of the Best Episodes of Star Wars Rebels, Not Worst

The episode deemed the height of filler is actually anything but...
by Kyle Barratt 12/07/2022

Space Whales. I remember when the trailer for the second season of Star Wars Rebels was released and the intergalactic cetaceans were immediately the butt of a joke. The episode featuring them, “The Call”, was derided upon release. The whales, or Purrgil to give them their correct name, were mocked. In a season of Ahsoka vs Vader duels and Princess Leia cameos, The Call became the go-to example of Rebels’ filler episodes. Then the series finale changed everyone’s mind when the Purrgil returned and played an unexpected but crucial role in the show’s ending. The episode was then looked on less as mere filler but as a necessary evil, an introduction, a set-up for later. But I still disagree with this rebranding. The Call has always been something more. Regardless of whether the Purrgils return or not, their introduction has always been one of my favourite episodes of the series since the first time I saw it, but a recent rewatch has made me understand truly why. The Call is a major turning point for Ezra’s character, both in terms of his abilities and his allegiance to the light. It’s a hugely important episode in his arc, quite the opposite of filler. Ezra’s natural ability is empathically connecting with life, not just the other beings he encounters but notably with the galaxy’s wildlife too. So far in the series this connection has been almost accidental – an encounter with a Loth Cat here, a run-in with a Fyrnock there. In The Call he finally gets a grip on his ability and connects to the Purrgil with purpose, deciding to help them instead of simply use them, like he has with creatures in the past. A positive connection rather than the negative connections of the previous season. This puts him on the path to connecting with the Loth Wolves in the final season, the pinnacle of a journey that starts here.

The organic vs the mechanical. It’s a classic theme of Star Wars, and one too often underdiscussed. Whether it’s choosing the Force over a targeting computer or the Ewoks overcoming the technologically-advanced Empire, it’s been a key part of Star Wars from the beginning, all the way to the barmy sight of Orbaks charging down the hull of a Star Destroyer in The Rise of Skywalker. The Call embraces this theme and delivers one of my favourite examples of it. The Mining Guild has taken over one of the Purrgil’s habitats, stealing the gas they feed and thrive on for themselves, and the crew of the Ghost help the whales reclaim what is theirs. The term ‘Space Whales’ doesn’t do the Purrgil justice. They have teeth and they use them; they’re not silly fairytale creatures but rather eat their enemies and can destroy TIE fighters, making for some very fun action beats. The beauty of Rebels is never talked about enough. People get hung up on the different art style than The Clone Wars but, after a couple of episodes adjusting to the new look, I fell in love with the visuals of Rebels. The character models aren’t my favourite but the Ralph McQuarrie-inspired environments and the advances in the technology behind the animation are superb. The Call, a random episode in the middle of a season, mocked by some and forgotten by others, has some of my favourite visuals in the franchise. The cold darkness of space punctuated by almost neon glows. The sea of blue mist and the fluorescent lights of the Purrgil when they are fed. There’s such a sense of wonder and magic about the whole episode and these amazing beasts.

Even the scenes on the Ghost look different, the emergency lighting flooding everything in red, like a submarine thriller to match the real-life inspirations of the Purrgil. The red lighting doesn’t just look cool but it also says something about the current predicament of the crew. The Call really shows the struggle of the early rebellion, more than most other episodes. The episode begins with our heroes in the freezing cold, floating in space with almost no fuel. This is truly a small group facing impossible odds. The first season of the show dealt with the day-to-day struggles of fighting the Empire but when the Ghost linked up with the wider cause, becoming part of a fleet, those problems seemed to disappear. Fuel and food were no longer a concern; greater conflicts took over. I always liked the focus on smaller struggles, the more personal, relatable ones, so I love that this episode explores those once again. The Call is a welcome break from the increased scale of the second season. Which isn’t to say I dislike the expansion that happens in the show, quite the opposite, in fact: season 2 is my favourite season of the show, but there is the constant danger of the series becoming too connected to other stories. With Rex and Ahsoka becoming major characters, Rebels came close to being part of the ‘Clone Wars Reclamation Project’. The Call is purposefully an antidote to this. It is pure Rebels. No distractions, just the core crew of the Ghost on a mission, that’s all. This allows for some needed characterisation for the crew, primarily Hera. Like Leia before her, Hera is a fairly steadfast character. She doesn’t go on quite as grand a character journey as other characters, instead being the constant in the show, the idealistic rebel that drives the other characters forward. Yet The Call is a rare episode she does learn something and grow. She’s initially negative and grumpy about the Purrgil, not wanting anything to do with them because she’s so focused on the mission, but she comes to understand that helping the whales should become the mission. She’s too often blinded by the greater cause to see the small victories in front of her.

The Call also adds so much to the canon and lore of Star Wars. The Mining Guild was mentioned all the way back in The Empire Strikes Back but this episode finally shows them. After blasting Stormtroopers every single week, having a different villain than the Empire for an episode is a refreshing break. Finally, some non-human enemies who even have their own modified versions of TIE fighters to make the action more interesting. And it’s not just the present lore which is expanded but the ancient mythology of Star Wars too. We learn that the Purrgil can travel through hyperspace, a bold addition to the canon that I love. It not only sets up their final purpose in the series but also leaves the viewer, like the characters, rethinking what they know about the galaxy. How can an episode that does that be “filler”?

Have I convinced you that The Call is severely underrated? Let me know in the comments and be sure to geek out with me about TV, movies and video-games on Twitter @kylebrrtt.

What Would a Second Season of Obi-Wan Kenobi Even Look Like?