After a week’s hiatus from my weekly highlights, I am happy to come back strong this week with some amazing television. As always, beware, spoilers below!

This week is a return to form for everybody’s favourite clone-based drama. With the return of Helena and some incredible performances all around, Orphan Black is closing in for a spectacular end of season. This week opens with the fallout from last week. Evie Cho has taken control of Brighborn and Neolution and is laying out her plans for the group. Meanwhile, Rachel and Ira are working to regain control, teaming up with Clone Club, led by Sarah and Felix. Tatiana Maslany never ceases to impress me. The fact that she can appear twice in the same scene and deliver two distinct and impressive performances is spectacular. I find myself forgetting on a regular basis that these clones are all played by one person. Something which sounds absurd on the surface, but she really does portray these roles that well. Helena is introduced in her element. Adorned head to toe in what we assume is self-caught fur, she fits right in. Her skills from her previous life are well utilised, with an impressively set camp. However, as is apparent later in the episode, she eventually returns from the wilderness, just in time to help Alison and Donnie in their time of need. Speaking of the Hendrixes, their storyline this episode was as always, both extremely serious and hilarious in equal measure. Last week, Donnie managed to fall into all sorts of trouble in jail with the resident neolutionists. His release leads to an equally amusing and concerning bedroom scene, and all seems well for the perfect couple.  Unfortunately, they find themselves in need of help again. Helena is well appreciated in her return, hopefully, to remain for a long time. Cosima is well within her element working alongside Susan Duncan to find a cure for the clones. Using their combined experience, they are sure they can succeed. At the same time, Rachel is back at Brightborn, supposedly to shakedown Cho. Little does Evie know that there are much larger powers at work, and as the episode closes, the pieces are well set for the season finale next week. As much as Supergirl has never quite hit the “epic” stakes of the movies or even the “nearly-epic” stakes of it’s TV colleagues, it still provides an entertaining ride each week. This week we see the effects of “Myriad” on the people of National City. As Maxwell Lord says “We’re way past villains of the week and kittens stuck in trees”. Astra and Non’s project of the season has finally come to fruition. The people of National city are under their control, and their next target is the rest of the world. With Indigo on his side, Non is sure to succeed. However, Supergirl is a constant thorn in his side. She isn’t on her own. Not everyone is under the thrall of the Kryptonians, and Maxwell Lord and Cat Grant are in Supergirl’s corner. The decision to put this team together is wise. With Supergirl as the muscle and Ward as the counter point, it falls to Cat Grant to be the voice of reason. The writers have some great opportunities this episode to focus on the crux of the story. With James Olson and Winn out of the picture and Hank and Alex on the run, the story takes a darker turn as although Non’s plan is of good intentions, the execution typifies sinister. Forcing Kara to make a choice between her friends, Non demonstrates that he isn’t playing anymore. Lord’s plan has it’s own level of sinister inherent also. As the chaotic good in this situation, as far as he is concerned, the ends always justify the means. The repetition throughout this episode of powerlessness is a key component. Non and Kara want to protect the Earth because there was nothing they could do to help Krypton, Lord was powerless to help his parents and Alex was powerless to help her father. These feelings resonate through the actions of each of the major players, pushing the episode to its conclusion. Again, Cat Grant takes the Yoda-like role this week. Her balcony speech to Supergirl was powerful, rousing and spoke to the fact that by just being in the city, Supergirl is a force for good. She doesn’t need to spill blood, to kill or even to fight, she just needs to continue doing what she is doing. The episode ends, as is expected from a penultimate episode, with a cliffhanger. The notion of family is brought to the fore as Supergirl is required to make a choice on her survival. As I said at the top of this section, Supergirl is never epic, it will never win awards for exceptional storytelling. However, what it does do, it succeeds at. The production team has managed to create a light-hearted superhero show that still manages to address some very real issues. While not continual, dark themes are events are introduced, and viewers can see that if push came to shove, the writers would be fine with killing off a loved character. For this season, however, the line is drawn in the sand. We have one episode left, and the fate of the world rests on it.

I absolutely love this show. Amazing performances, spectacular production, a fascinating storyline and a grasp of the crazy things in life like nothing I have ever seen on television before. This week pushes home these ideas as we go through some curious experiences over the space of 42 minutes.

Jesse has uncovered his powers last week. We last saw him commanding a comatose girl to open her eyes. Early this week we realise this is exactly what happened. Nothing more, nothing less. Obviously shocking to Jesse, he retreats to the church for reflection. Cassidy finds him there, and we get to see the extent of our Preacher’s power, and the ease at which it can take over a man. The relationship between Cassidy and Jesse is an interesting one. While Jesse often seems exasperated with Cassidy, the other way is quite different. As we see this week and last, Cassidy holds Jesse in high regard, and although their outward belief systems clash, he protects Jesse as much as he can. This extends as far as the secretive “Government”. I don’t want to reveal too much here, but if what they say is true, Jesse’s newfound power could be more powerful than he can imagine. 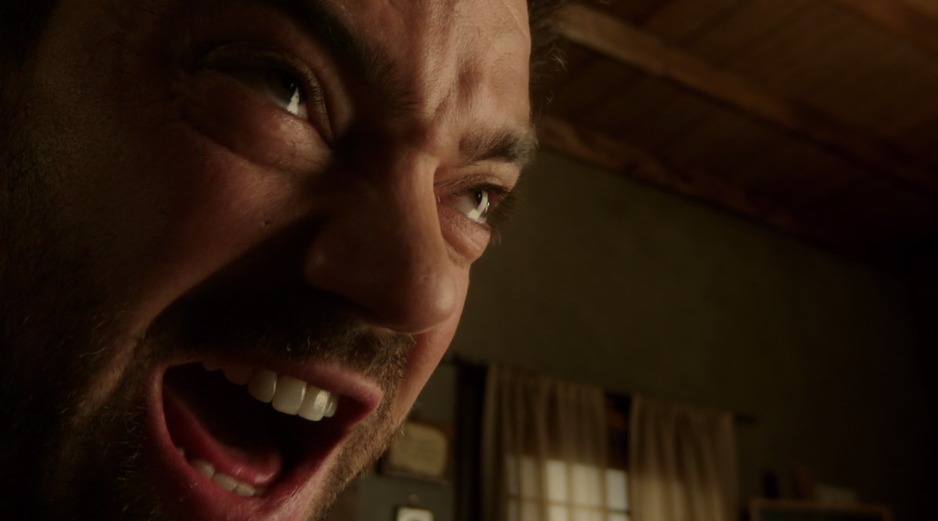 This week for Tulip was very much focussed in the past. We learned more about her history with Jesse along with how they found themselves in their current relationship. Shady deals early on in the episode bring along an equally shady new character from the just-as-shady “Grail Corporation”. As a character, Tulip is one of my favourites. She is confident without being cocky, vulnerable while still being independent and so very funny. She knows how to manipulate people, as evident from this week’s episode, but is still open to being manipulated herself. These flaws in her strong outward face build together to create a well-proportioned character, played to perfection by Ruth Negga. Her current focus is to find the man who put her in this position. She needs Jesse for this, whereas he isn’t so interested. Preacher for some reason has ticked so many boxes for me. This week’s episode has managed to set up so many questions for the future, without really trying. Who are “The Government”, really? What is going on at Quincannon Meat & Power? How far will Jesse take his powers? How far will Donnie go for revenge? These questions are just a few that have opened up after watching this episode. I can’t help but get excited every Monday to watch it in the evening!

Another great week! Come back next week for the finales of Orphan Black, Supergirl and Legends of Tomorrow, but in the meantime, tell us what you think! Tweet me @TellyAlex or join the conversation on Facebook. What do you want from your Out of Lives TV coverage? Let me know!

Portal 2, Left For Dead and More Coming To Xbox Today!

Tanked Up and Hell Diving