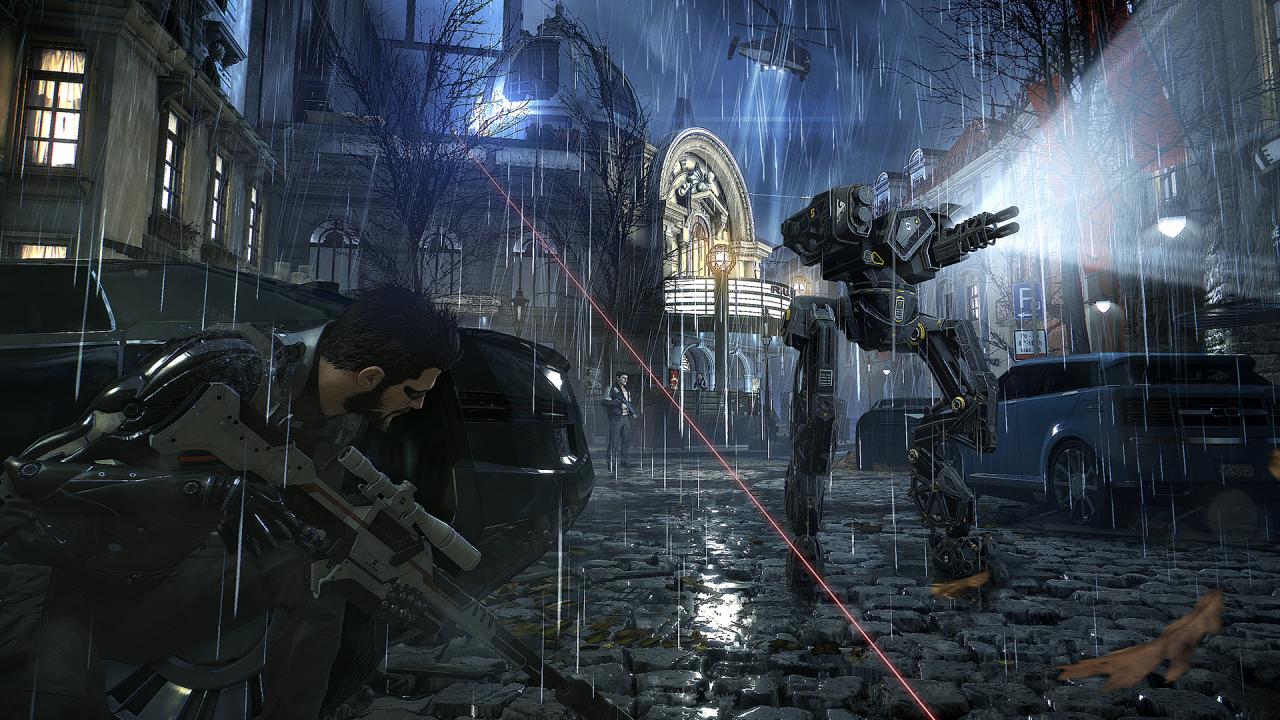 I remember writing about how excited I was for the upcoming release of Deus Ex: Mankind Divided, the sequel to the superb Deus Ex: Human Revolution, as one of my first scribblings for OutofLives. And now I’ve finally gotten around to playing it; it only took three years and for it to be ‘free’ with PlayStation Plus for me to push the start button. I may be late to the party giving my opinion on the game but then again, my last gaming article was about Gears of War 2 so this is pretty up to date for me.

Mankind Divided has garnered criticism for being too short and it’s true, you can whizz through the campaign in about 10 hours if you want but I spent more than twice that exploring the large open world hub of futuristic Prague. The length of the game is surprising and the ending extraordinarily abrupt, and I was just playing the optional side missions and exploring Prague as an extra thing to do but looking back now I can see that that’s the true game. Not the story and the main missions. They are just an excuse to give you the freedom to explore this beautifully-created world that I fear many gamers just sprint through to get to the next objective marker.

Prague is stunning to look at and filled with buildings, streets, alleyways and even sewers to explore. It’s a peopled labyrinth of walls, one that initially seems quite complex to remember and navigate, but soon your sense of direction kicks in and I was rarely lost despite the map’s size. Every building has multiple points of infiltration, from balancing and jumping along small window ledges to air vents that make you feel like a TV dinner. And within these structures are side missions to complete, computers to hack and a wide variety of miscellanea to shove in your digital pockets. I’m an obsessive-compulsive gamer. I have to search every room and pick up everything I find, from bottles of alcohol I’ll never drink to ammunition for a gun I don’t have and will likely never use. I guess my focus is less on exploring and more on, well, tidying up. In most video-game open worlds, the NPC civilians are nothing but digital wallpaper. Walking, talking, polygonal mise en scène. But in Mankind Divided they feel like people. The world feels like a real world. They have lives and names, you can have conversations with them and you can break into their apartments or workplaces and read their personal emails, uncovering the secrets of their private lives. It makes Prague feel real, lived in and impeccably designed. Thought has gone in to not just main mission locations but every back room and bathroom you can walk into and every NPC that inhabits them. It’s not just developers copying and pasting trees and identical buildings to fill out the open world, instead every inch feels unique. The size of the map feels incredible and yet towards the end of the game, when you’ve explored and completed everything, and you just need to get from one end to the other to continue the story, it only takes about a minute. It’s a welcome change from developers always trying to outdo each other by measuring map sizes. It’s not how big it is that’s important, it’s what you do with it and Mankind Divided squeezes every inch with amazing detail that makes the compact world feel ginormous.

It’s not just great gameplay the Prague hub offers but a fascinating way to tell a story too. The lore and backstory of the world and the characters who inhabit it can be uncovered and learned naturally at your own pace, while the campaign is much stricter and more expositional. It feels much better discovering intelligence on your own by sneaking into apartments and hacking into email accounts than having the same information spewed at you in forced dialogue. The story of the game is decent and explores interesting questions on topics like humanity and technology but it’s not on the same level as the grand tale told in Deus Ex: Human Revolution. But that works in Prague’s favour. In Human Revolution I would explore every nook and crevice but nothing I found would impact a story on a global level. But Mankind Divided wisely brings those stakes down and is largely about finding a Prague-based terrorist, therefore every pocket secretary, every email account and every hidden safe I discovered and hacked into could hold the answer. The smaller stakes make the open world feel larger and more important than the game’s predecessor. The open world is used to explain and explore story points in a completely natural way. Prague is at the centre of the conflict between humans and augmented humans, who have robotic appendages and enhancements. After the ‘Aug Incident’ of the previous game, segregation has been enforced and, being augmented, our protagonist Adam Jenson finds himself persecuted as he/we explore the city. Most things are left unsaid and found through exploration, like noticing the wall separating the city into two zones with Aug NPCs much more common in South Prague than North Prague. Some establishments might say “we don’t serve your kind here” and you have to woo them into allowing you into their shop, or just give them a good ol’ bonk on the head instead. Posters and graffiti detail the cold conflict and you can listen in to conversations NPCs are having to understand the world’s lore and backstory. The game uses the subway as the fast travel system and the train carriages are split between humans and Augs, the human carriages appearing clean while Aug carriages are grimy and coated in litter and graffiti. And if you use the human carriage you might find yourself on the wrong end of a police rifle when you reach your destination. Every time you exit a train station you get stopped by police who refuse to let you pass before checking your papers and this gets really fucking annoying. And it should! I love it! It makes the world seem like a real place and, for how many spectacular ways your character can murder people and traverse the landscape, you still get stopped by an old policeman obsessed with paperwork.

You visit the Prague hub three times over the course of the game: once in the day, once at night and once again when it is under martial law and the whole city apart from your apartment is a restricted area where the police will shoot on sight. It feels different every time you visit and new areas open up, from Dvali territory – the seedy underbelly of the city run by gangsters – to the secure vaults of the Palisade Bank which is my favourite area in the game. Security, criminal and police presence changes every time you return to the city making you change your tactics and approach to keep the same areas from feeling stale. When you do leave Prague for extended story missions – which are enjoyable – I rushed through them a little bit just because I wanted to get back to the city and explore some more.

It’s unlikely that we’ll be getting a Mankind Divided sequel anytime soon, although I’m partly to blame for that by not picking up the game when it was first released. The story leaves multiple plot threads and mysteries hanging, and it’s clear a sequel was intended. We’ll probably get a reboot at some point, likely set between Mankind Divided and the original game of which it is a prequel to, but to be honest I’m not too fussed with learning the answers to questions left unanswered. Just give me an open world with apartments, bank vaults, sewers and shops to infiltrate, and credit chips and Praxis kits to steal and I’ll be happy. Have you played Deus Ex: Mankind Divided? What are some of your favourite open worlds in gaming? Let me know in the comments and geek out with me about TV, movies and video-games on Twitter @kylebrrtt.

Tanked Up 164 – An Unexpected Union

All Killa No Filla – Out of Pods Review