2019’s Call of Duty Modern Warfare had been promised to be both a return to the boots-on-the-ground, classic style of the older games in the series and a much-needed evolution for the franchise. For the most part, I feel the game has succeeded at that tough task, in both the campaign and multiplayer, and the game has made me feel like a teenager again with a slight addiction to the franchise’s competitive multiplayer. Or at least an addiction to a specific part of it. For all Modern Warfare has been billed as a new experience with larger maps and player counts, it’s been an old-style small fast-paced map that has really grabbed my interest and kept me playing, even with the recent release of Star Wars Jedi: Fallen Order. I admit, I’ve not even played the new Ground War mode since getting the game (I dabbed with it in the beta) or any of the new game modes I was excited for in the run up to Modern Warfare’s launch. No, Shoot House 24/7 has proven to be the sole subject of my addiction. Apologies for the cringey soundbite but Shoot House really is Call of Duty back to its addictive best. Other maps presented in the game offer an advancement from those seen in the earlier games, with unsymmetrical design and less obvious paths that actually take time to learn and therefore ultimately feel more fulfilling when you start doing well. I enjoy most of these new maps and the progression they represent a lot, and so it’s a shame that it’s Shoot House – which is very much a throwback to the classic three-lane map of old – that has excited me the most. I feel guilty about it because I’ve stopped playing the other maps and modes altogether and instead plucked for Shoot House 24/7 which lets you play on that map for as long as you like with a variety of game modes. It’s quite a nostalgic experience, bringing back memories – mostly good – of Nuketown in Black Ops.

Shoot House is a very small map and therefore offers the most fast-paced action I think I’ve ever played in a Call of Duty. You get the feeling that you’ll die if you stop moving and so it’s 12 people constantly running and rotating around the thin plywood walls, shipping containers and ruined vehicles that make up the map. There’s no time for the camping and Claymores that can plague other maps, and the three-lanes mean that you can easily flank enemies or even drop down on unsuspecting prey from above. This means the kill-zones are changing constantly unlike certain other maps (the nightmare of un-patched Piccadilly) where one team could be backed into a corner and unable to escape for the entire match. Here the teams change sides constantly and where you’re going to spawn is anyone’s guess, keeping you on your toes, and making items like riot shields – which for some reason I see a lot of players use – useless because enemies will almost always be approaching you from multiple directions. The combat is ludicrously frantic and the constant moving, checking corners, altering directions and, of course, shooting often leaves my hands shaking after the match has ended.

I’ve been playing it so much that I’ve even started having Shoot House dreams and I awake in cold sweats with an active mind abuzz with possible targets. Gaming before bed isn’t supposed to be good for you anyway because your brain stays active for too long afterwards – things like reading a book are better at lulling yourself to sleep softly – so playing such a frenzied game that lights your synapses on fire before bed can’t be recommended. I used to have a good REM sleep cycle, waking at the right time feeling well-rested and unable to remember my dreams, but now if I play Shoot House too much the day before, I sleep much worse. There’s a clear correlation. But I can’t stop myself! It’s just too much fun. A reason that I can’t stop playing, other than just how entertaining it is, is that I’m a completionist at heart and Shoot House is by far the best map for completing the in-game challenges. Shoot House makes them so much easier to complete, whether they be to get a certain number of kills with a weapon or attachment, or take advantage of a specific perk, because of just the sheer amount of kills you can rack up in a match. I have to admit that I’m one of those bothersome people that use the M4A1 assault rifle and the 725 shotgun most of the time but if I’m tasked with using a different gun then Shoot House offers the quickest and easiest way to increase its rank and kill count, and it’s the same with explosives too. If you chuck a well-timed Semtex grenade near a flag in Domination or a headquarters in, well, Headquarters then you can quite often get triple kills. And these things happen to you too. A random grenade thrown from the other side of the map can quite easily land at your feet and you’ll often be dispatched by a shotgun blast that comes out of nowhere. I’ve seen some people online complain about this, and while dying immediately several times in a row can be frustrating, everyone’s in the same boat and the map means that with just a bit of skill (I’m not a great player) you can dominate the enemy just as much as they can you.

Shoot House 24/7 offers the exact same map every time but switches between four game modes: Team Deathmatch, Domination, Headquarters and Kill Confirmed. Team Deathmatch is the old faithful mode of Call of Duty and the one I play often. It’s simple but hard to top, and Shoot House is a great map for it. Domination too is fantastic, even with just the 12 players Shoot House allows, and I find this is the game mode I do best at, probably because you know there will always be enemies surrounding the flag locations. The quality of Headquarters matches vary quite drastically because people playing Shoot House 24/7 don’t get to pick which game mode to play like you can in the rest of the game. You can almost hear the collective sigh – and see the amount of people quitting – when Headquarters rears its head. Many people just don’t like that game mode (personally I don’t mind it but it’s not one of my favourites) so quite often players will ignore the actual objective and just turn the whole thing into an extra long game of Team Deathmatch. 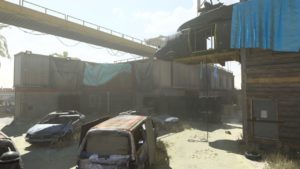 It’s Kill Confirmed where Shoot House really comes into its own. And by that, I mean it’s a gloriously bonkers mess in all the right ways. After the first 20 seconds, there are no firing lines or a handy divide between friendly and enemy territory, just 12 players sprinting around, shooting at the first sign of enemies and dying a whole bunch of times. There’s no teamwork despite it being a team mode because, even though you want to be on the winning side and for your teammates to do well, it hurts inside when you see a friendly poach the dog tag of an enemy you’ve just killed right in front of you, essentially stealing the points from you. This makes everybody play in a selfish and individual manner and so there’s no co-ordination, just madcap moving and firing – often at the same time. That type of gameplay on such a small map does often mean that the spawns get out of whack and are dangerous. You can easily spawn next to an enemy, or at least in their line of sight, but that’s a small price to pay for the enjoyment that mode on that map can bring, and I even find it part of the fun.

I don’t know how long Shoot House 24/7 will remain playable in Modern Warfare, or how often it’ll return, but I both dread and hope for that day to come. Part of me wants to play it forever but this addiction (and don’t worry, I’m not using that word completely seriously) is seemingly impossible for me to break, and so it’s the game that must do so and take my beloved game mode away from me. But while it’s here, I think I’ll stop writing and go play another match. Or another 10.

Have you played much of Call of Duty: Modern Warfare? Are you a fellow Shoot House 24/7 addict? Let me know in the comments and be sure to geek out with me about TV, movies and video-games on Twitter @kylebrrtt.

Tanked Up 189 – Apple Arcade is in Control