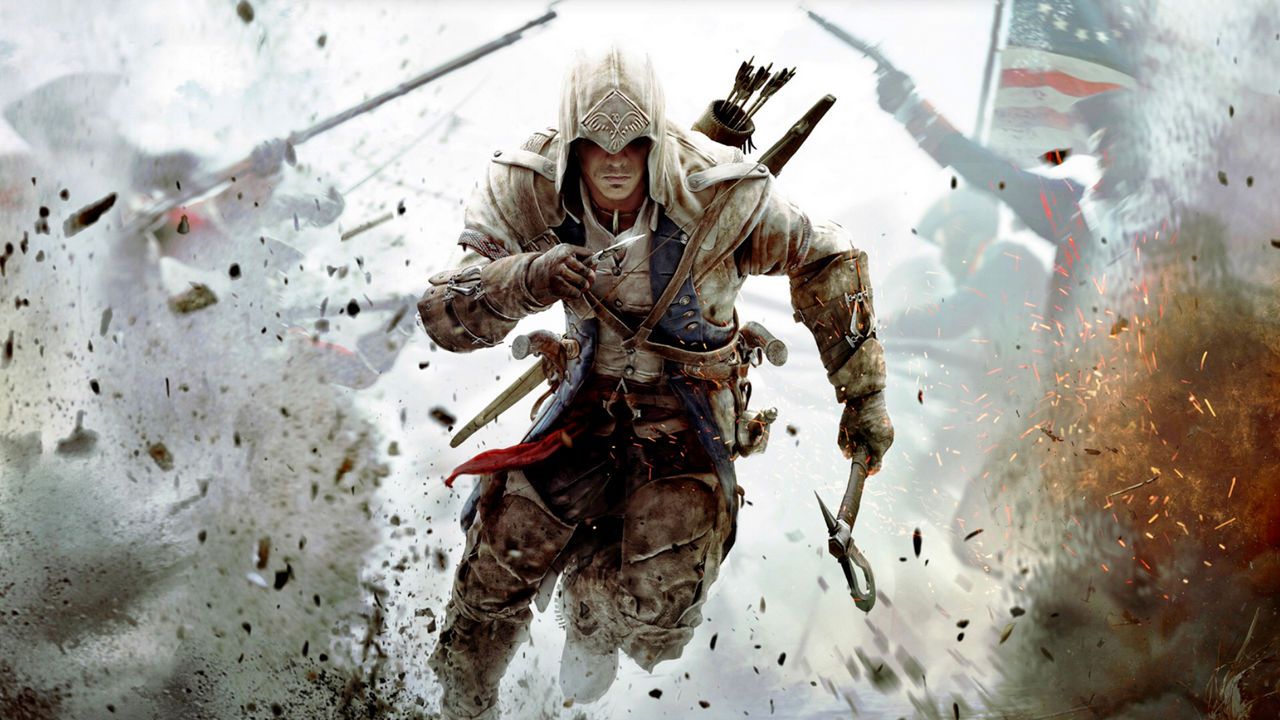 Why Connor is Assassin’s Creed’s Most Underrated Protagonist

I explore why Ratonhnhaké:ton is one of the franchise's best characters, from his unique perspective, subtle growth, and misinterpreted failure.
by Kyle Barratt 27/10/2020

Assassin’s Creed 3 ’s Connor shouldn’t work as a compelling protagonist. It’s made clear from the start of his journey that Connor, or Ratonhnhaké:ton to give him his full Kanien’kehá:ka name, is just a pawn in a game. Juno, whom he sees as a God in a Piece of Eden-fuelled vision quest early in the narrative, tells him that he has to venture out and protect his land, and the Grand Temple, from the Templars. Ratonhnhaké:ton also has to acquire “the key” and keep it safe for when Desmond requires it some 200+ years in the future. So, Connor’s goal is to acquire a Macguffin that he will never have a use for, given to him by a mysterious godlike being who is simply manipulating him for a larger purpose. Connor’s quest begins with little personal motivation. Not the revenge of Ezio or the redemption of Altair but by following the will of an ambiguous message sent through time. Given this set up, placing him in the game’s lead role shouldn’t work, but somehow it does. The bulk of Assassin’s Creed 3 is set in the Thirteen Colonies during the American Revolution of the 1770’s, with the conflict being the backdrop of Ratonhnhaké:ton’s coming of age. Born to a Kanien’kehá:ka mother and a British Templar father, the boy who will come to be known as Connor witnesses his village burn and his mother die, before embarking on a quest to become an Assassin under Juno’s orders. Connor enters this new world of revolution and war on a whim and from a place of naivety – he’s a young man with a God-given purpose, and finds that the world doesn’t care.

But the truth is, he has the perfect perspective on the war for what the game is trying to say. He’s the ultimate outsider. Much like his perceived status as a pawn by the Isu, the Native Americans are manipulated and used by both sides of the conflict, but Connor rebels against this idea and slams a tomahawk into a wooden post – viewable throughout the game as a constant reminder – and promises not to remove it until he’s found peace. In all aspects of his life he’s powerless, but he seeks to change that. While wicked men on both sides fight for power amid the birth of a new nation, Connor does so to help his people. He’s a pawn who takes down kings, quite literally in the DLC. 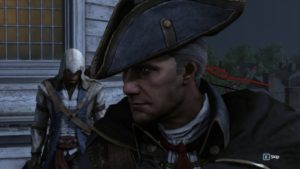 Assassin’s Creed 3 could have easily had a very different focus, and for its first few hours it does. Haytham, Connor’s charming English father, is a traditional Assassin’s Creed lead character and the game’s initial protagonist before shockingly becoming the antagonist for the rest of the game, with the perspective changing to that of his son Connor. And it’s that perspective which is so vital to the game, offering us a viewpoint on the American War of Independence that shows it to be anything but for the native population. We’re now in a time where video games are purposefully trying to diversify and Assassin’s Creed 3 feels ahead of the curve, even more progressive in some ways than the more recent games in the series that are trying to market their half-baked liberal appeal without ever fully committing. However, Connor wasn’t chosen for moral grandstanding but because he genuinely offers the most fascinating outlook on this time period and location.

It’s not just Connor’s perspective on the Revolutionary War at large which makes him a great protagonist but his stance on the Assassins Vs Templars conflict as well. The game brilliantly personifies this through Connor’s two fathers – his biological Templar father Haytham and his adoptive Assassin father Achilles. His, and our, response to both of these characters changes throughout the game and the conflict is much more complex than it has ever been before. Assassin’s Creed 3 was the first game in the series to really delve into the dueling ideologies of the two factions and Connor is the lynchpin of all these thematic points. Where once the Assassins were the pure and noble good guys, Connor questions the code and, after breaking it apart, puts it back together again even stronger. I’ve seen people make complaints about the mere surface level of Connor’s ‘daddy issues’ and his angry teen angst and, while that’s certainly there, I beg you to look deeper. Since the game’s release, I’ve seen people over and over again refer to Connor as dull and bland. And sure, he’s certainly not the charismatic hero that Ezio was, but that’s the point. He’s an outsider struggling to fit in in this new world. He’s constantly uncomfortable with social interactions and confused by the settlers’ culture, only finding a place to call home on Achilles’ land where he bonds with his black adoptive father over their status as outsiders in this world. It’s in the optional ‘Homestead’ missions set on Achilles’ land in which Connor begins to change and grow as a character. Where he begins to show his humanity.

The concept of the homestead is one of genius and perfectly fits thematically with the game at large. While what will become the United States is being formed, a microcosm of that same process is happening on Achilles’ estate, where Connor is helping to form a new settlement. Characters he meets on his journey are asked to settle and build their homes and businesses there, and we play a variety of missions which expand these characters’ properties and allow Connor to interact with different types of people who want somewhere to call home. The characters’ lives intertwine in unexpected ways and the missions almost become ‘Assassin’s Creed: The Soap Opera’, but in a good way. Over the course of these homestead missions, whether the generic fare of warding off enemy invaders, fetching an item for a citizen, or even being tasked with getting Miriam ready for her wedding, Connor’s personality shines through. So far it feels like I’ve described Connor as a mere perspective point – a character with a specific point-of-view as a surrogate for the gamer to explore this world from a certain angle. And, story-wise, that’s literally what he is for Desmond. That’s what he’s truly rebelling against in a meta way, and it’s these homestead missions that greatly expand him into his own compelling character.

So, I’ll admit, Connor isn’t instantly as captivating as some of the franchise’s other protagonists. The initial hook isn’t here but Assassin’s Creed 3 is a game which consistently which makes you wait for the good stuff. Connor, over time, develops into a very different person as the one he starts out as, and the game requires patience by the bucket load. There are fair criticisms surrounding the pacing of the game but upon revisiting it recently I found the structure much more compelling than before. The jolt of Haytham’s extended prologue is lessened and I relaxed into the slow progression from childhood Ratonhnhaké:ton to the Assassin he becomes. The game is a full-fledged historical epic and, while it maybe bites off more than it can chew in some aspects, in terms of characterisation I think the game does a wonderful job of building up Connor into someone unique through his experiences as you progress. We’re 1200 words into this article and I’ve yet to mention the most basic part of Connor’s story: his revenge on Charles Lee. Lee burns down Ratonhnhaké:ton’s village and kills his mother when he’s only a boy, but the Assassin’s quest for vengeance is only the most surface level and generic part of the plot, albeit one that works admittedly quite well. After Ezio’s similar family loss and decades-spanning revenge, it feels a bit stock. However, unlike Ezio where revenge is the driving force behind his characterisation in AC2, here in AC3 it’s simply the catalyst to explore the themes of the game and the greater narrative. A push to get Connor involved in the wider world and introduce more interesting parts of the story, before returning to Charles Lee in the game’s final hour. However, it still works as a simple revenge tale and has a satisfying, if not rushed, conclusion.

Ultimately, Connor’s misinterpreted failure is what truly makes him the franchise’s most underrated lead. He helps usher in a new regime that, from his perspective, is little better than the one that ruled before. His tribe is forced to leave their home and move out west, and he’s coerced into killing his childhood friend. It’s a heart-breaking and damning view of this time of celebrated history, and one that seems a decade ahead of its time considering how we’re now taking a greater look at historical misdeeds. Connor speaks to Juno one last time and is angry that his life meant nothing; that the importance of his existence was simply about acquiring an artifact and burying it in a safe place, losing everything along the way. He realises he was just a pawn in a game he didn’t even know the rules of. But while he lost so much of what he initially set out to protect, he gained something new in return. What confirms Connor as one of my favourite protagonists is that he eventually finds peace, just not the peace he was expecting. He failed in the pursuit he gave himself and succeeds in the vacuous one given to him by Juno, but along the way, in the background and without trying, he discovers purpose and his place in the world, not in America at large but his own little community. The homestead. The outcast and outsider who shaped world events on a mission of folly finds a home and himself. That’s where he develops his true personality, away from the violence and murder his quest demanded, and that gentle character development is the game’s greatest success. He pulls the tomahawk out of the wooden post, his personal war now over along the nation’s, and in many ways he failed. But he won where it mattered. Not in the death of Charles Lee or Washington’s victory, but in that he found himself and a new family. The character defined by being an outsider and a pawn is now neither, and has developed into one of Assassin’s Creed’s best leads.

Is Connor one of your favourite Assassin’s Creed protagonists? Can anyone ever top Ezio? Let me know in the comments and be sure to geek out with me about TV, movies and video-games on Twitter @kylebrrtt.

Tanked Up 234 – IPAness with the Family