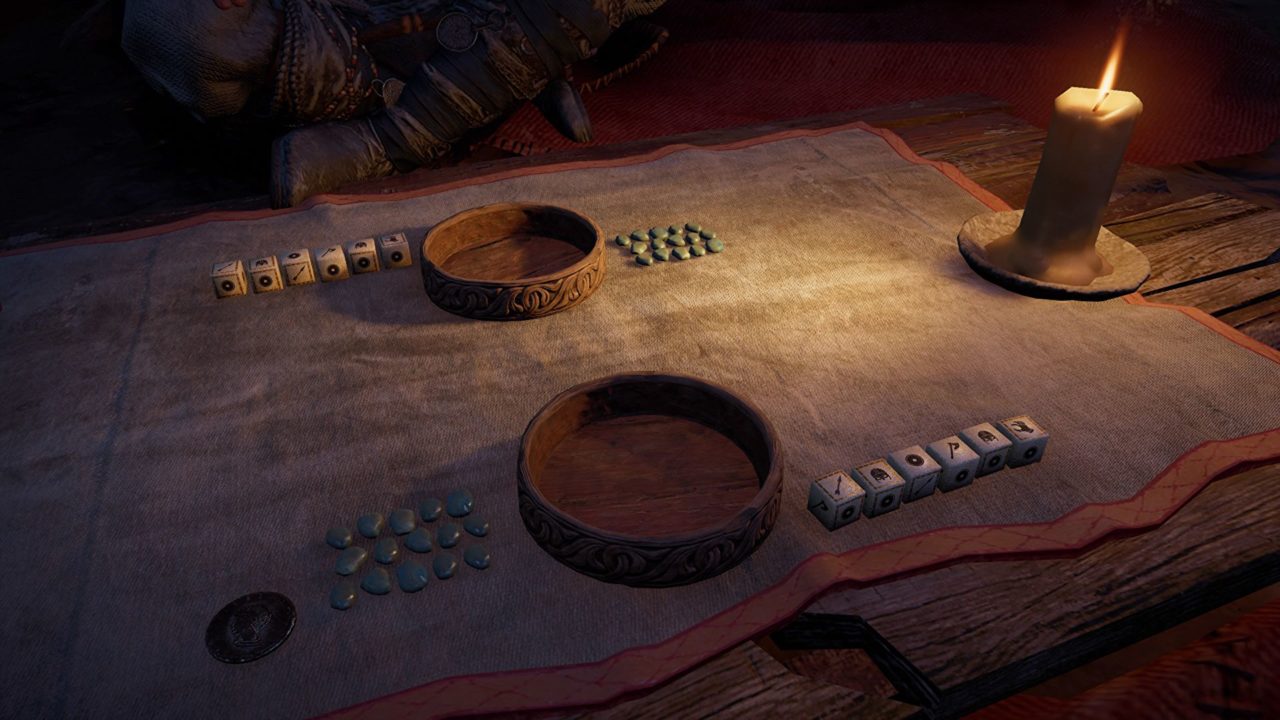 After years of being haunted by Ubisoft's terrible minigames, Valhalla's Orlog is shockingly addictive and enjoyable
by Kyle Barratt 23/02/2021

It’s November 2012 and I’m pissed off. You see, I’m something of a Trophy Hunter myself. Maybe not obsessively so but I look at the list of those useless little things before playing any PlayStation game and aim to unlock the platinum whenever possible. I’m also a big Assassin’s Creed fan so always put in the extra effort to one hundred percent each game and hear the platinum trophy unlock with a satisfying chime. Yet it hasn’t rung out for Assassin’s Creed 3. I’ve unlocked every trophy bar one: “Original Gamer”. In order to do so I need to win at all three minigames at the homestead. Bowls? Check. Nine Men’s Morris? Tick. Fanorona? A big fat cross. I can’t do it. I can’t beat the elderly NPC at an 18th century boardgame. The win, and the platinum, never comes. From this point on I hate minigames in Ubisoft titles. It’s April 2019 and I’m pissed off. The remastered edition of Assassin’s Creed 3 has been released and I’m traversing the thirteen colonies and listening to Ben Franklin rant about his sexcapades with older women just like I was seven years earlier. So too am I once again spending hours playing Fanorona without a win. In fact, it’s worse now. I can’t win a game of Nine Men’s Morris either. The years have taken their toll and not only am I worse at video games but I’m worse at boardgames inside of video games. The platinum remains elusive. So does the platinum trophy for Watchdogs: a QTE button-mashing drinking minigame being equally as frustrating. Blasted Ubisoft and their stupid minigames!

It’s November 2020 and I’m pissed off. I’m looking at the trophy list for Assassin’s Creed Valhalla – one of my first games on PlayStation 5. There’s a new minigame and a trophy attached. To unlock a pitiful bronze trophy, “Orlog Champion”, I have to beat all the Orlog players in the game. Not just one game like “Original Gamer” in AC3 but 19 different players dotted throughout the open world. I’m shaking with rage. Despite enjoying the game it’s always in the back of my mind, with every trophy unlocked the knowledge that it could all be futile and I’ll never get the platinum because of that damn minigame. I’ve put it off for as long as I can so I visit some crusty old sea dog in a Norwegian port to play some dice. I’m shocked, now that I’m finally playing it, to discover that winning a game of Orlog is not only doable but is actually fun.

Being an ignorant product of the British education system, I just presumed Orlog, like Fanorona, was an actual game in real life, played by Norse warriors to pass the time between the rape and the slaughter. But no, Ubisoft have created it from scratch. If I had heard that information before trying my hand at it then I would have screamed and bolted in terror. These are the people who came up with the tower defence game in Assassin’s Creed: Revelations after all. Yet, somehow, it’s great. It works like this: you and your opponent have 6 dice which can be rolled up to 3 times, the faces of which grant either attacks or defence in different forms. There’s also a currency that can be earned by rolling the correct symbol or by stealing from your opponent. This can be spent on your ‘God Favours’, special abilities that may attack your enemy, bring back some of your own depleted health, or bolster your rolled attack. The first to drain their opponent of all 15 of their health is the victor.

Granted, a big part of why I like the game is because it’s fairly easy. I win maybe 75% of the games I play. It hits the perfect balance for my feeble mind of intuition and tactics. I can’t just roll whatever and expect to win but once I got a few games under my belt I could see different paths to success ahead of me without too much head scratching. It’s the God Favours that offer the right level of unpredictability to the game because while I may hoard currency to unleash a huge attack on my opponent, they may do the same, or even use theirs to undo my recent attack. Opponents often have God Favours I’m not aware of until its too late. It’s February 2021 and I’m having fun. What started as mere trophy hunting ended with me travelling from town-to-town hunting for the next Orlog player with glee, ticking them off the list and immediately excited for the next. Now it’s done, the satisfying chime of the platinum trophy ringing in my ears, yet I’m not returning to the game to behead Saxons or raid river villages – I’ve had my fill of that after 117 hours, at least until DLC is released – but rather to play more Orlog. For fun. Ubisoft have actually done the impossible. A mini game that’s genuinely good. So much so that I plan on buying the physical version of the game when its released later this year. Fanorona it is not.

Assassin’s Creed Valhalla is still installed on my PlayStation 5 just for me to occasionally play Orlog. It’s good enough to take up valuable space on the console’s far too small hard drive. There’s no greater compliment than that. Are you an Orlog addict? What’s your history with Ubisoft minigames? Let me know in the comments and be sure to geek out with me about TV, movies and video-games on Twitter @kylebrrtt.