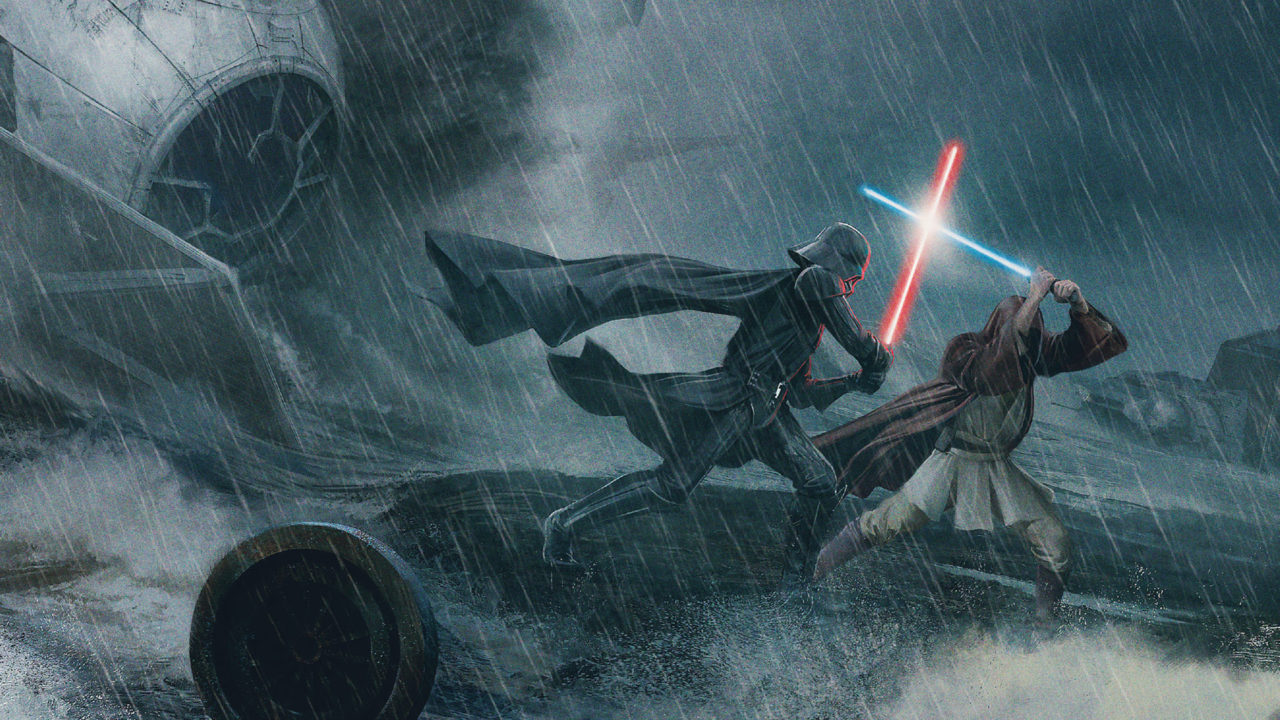 The idea of Vader and Kenobi dueling once more is proving controversial, but here's why it could be a brilliant idea...
by Kyle Barratt 06/04/2021

“The rematch of the century”. Those words, used by Kathleen Kennedy to describe Vader’s appearance in the upcoming, unimaginatively titled Star Wars: Obi-Wan Kenobi Disney+ series, caused millions of voices to suddenly cry out in either enthusiasm, concern, or confusion. We’ve all long since presumed that Obi-Wan’s confrontation with his former apprentice on Mustafar was the last time they met before their final encounter on the Death Star, and while that seems to have been Lucas’s intention, there is room for a rematch. In fact, while some fans cry foul and see another duel as a betrayal of canon, I instead see how, if done correctly, the rematch knits the canon into a much tighter, consistent tapestry. Despite the consistent voice of George Lucas, the original trilogy and the prequel trilogy have a few ways in which they don’t line up. Vader and Kenobi’s interactions are one of them. “Obi-Wan once thought as you do”, breathes Vader when Luke claims there is still good in him in Return of the Jedi. So, when did Kenobi believe this? It certainly wasn’t in Revenge of the Sith. Obi-Wan didn’t try to reach out and save Anakin or claim there was still good in him. He journeyed to Mustafar to kill him. Not only that but he left thinking he had succeeded. Obi-Wan also screams “you were the chosen one!” to Vader during their fight, but in his brilliant appearance in Star Wars Rebels, set very close to A New Hope, he tells a dying Maul that he believes Luke is the chosen one.

As you can see, there are currently some inconsistencies to Kenobi, but the upcoming Disney+ series could act as the missing piece of his story, truly uniting the prequels and originals. Obi-Wan needs to learn of Vader’s survival and his fate in the armoured prison of his suit, and maybe after consulting the ghost of Qui-Gon, reaches out to his former apprentice. He previously tried to destroy Vader but this time he vows to save him. To reach the good in him that Luke will eventually unlock. Maybe Kenobi leaves Luke because he still believes Anakin to be the chosen one, but after a crisis of faith and failing to connect to Vader, he returns resolute that Luke must be the one to bring balance to the force. I believe another confrontation between Vader and Obi-Wan makes perfect sense but the specifics of how this “rematch” should go down are vitally important. Kenobi isn’t hoping for a fight. Whereas on Mustafar he drew his lightsaber first, here it should be a last resort. Obi-Wan would be purely defensive during their meeting if blades were ignited, fending off attacks but not landing his own. The fight could – ahem – subvert expectations and be a different kind of duel. We’re all expecting the rematch to be like their first fight but I hope that it’s actually very different. Rather than the super-choreographed, hyper-kinetic prequel style, it should be more like Obi-Wan vs Maul in Rebels. A few well-timed strikes that truly represent something and show their growth as characters. Short and decisive. That is the Jedi way, especially if he wants to connect to Anakin.

Somewhat controversially, I really like Luke and Kylo’s confrontation at the end of The Last Jedi and would love Obi-Wan and Vader’s rematch to be in a similar vein. While impossible because of his apparition nature, Luke never strikes at Kylo. The two never clash. Luke acts as a true Jedi and is purely defensive and pacifist while Kylo’s rage keeps him from seeing the truth. I also don’t want to see Vader and Kenobi fight like they did in Revenge of the Sith considering we’re drawing close to A New Hope. Despite the older style of the very first Star Wars duel, I feel there should be some consistency and both combatants are aging. The show is set at the midpoint between prequels and originals and so the style of fight should be a midpoint too. There is one line of dialogue from A New Hope I see bandied around the Internet as a reason why a rematch shouldn’t take place, and on first impressions it’s a convincing argument. “When I left you, I was but the learner. Now I am the master.” Vader taunts Obi-Wan with this when they meet again on the Death Star and, granted, it does state that when they last fought Anakin was Kenobi’s apprentice. A rematch would contradict this. But do you know what else contradicts this? Revenge of the Sith! Anakin and Obi-Wan are technically equals in that film. They are both Jedi Knights. Anakin hadn’t been an apprentice for three years. In fact, he himself had an apprentice – Ahsoka – during that time. I guess Vader could still have seen himself as Obi-Wan’s learner at that time but technically he wasn’t. If needed, I’m sure some line in the new show could indicate that Vader still feels that way in some regard.

Obi-Wan and Vader should meet, and in some form, do battle again. Although, I hope there is an Inquisitor in the series so Kenobi can fight them for most of the season’s action scenes and keep his interaction with Vader a short but potent affair. Hayden Christensen can get in some screen time as Anakin in Clone Wars flashbacks instead. But let’s be honest. While I want deep character insight of old Ben Kenobi struggling with his past mistakes, his present as a hermit, and his future training Luke, I also want to see him fight Vader again because it’d be cool, stretching canon or not. And as it stands, I think a rematch would fix more in the canon than it would contradict.

Do you think “the rematch of the century” makes sense? Let me know in the comments and be sure to geek out with me about TV, movies and video-games on Twitter @kylebrrtt.