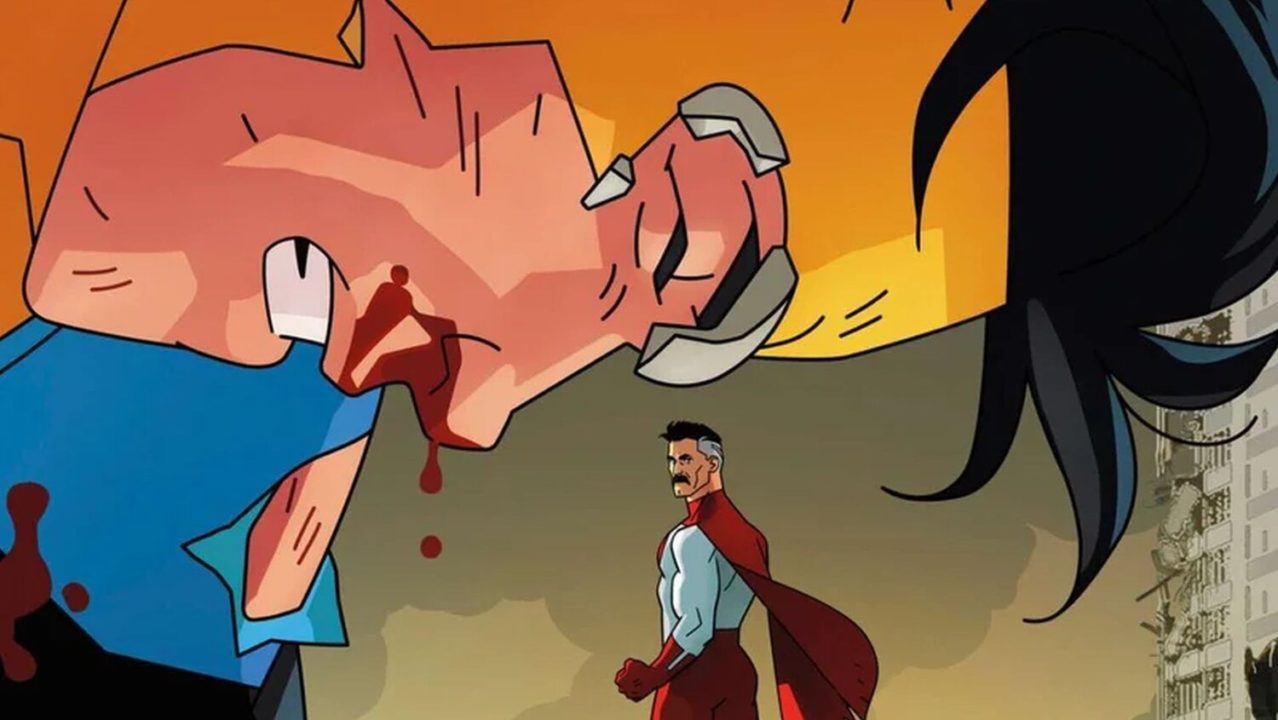 Invincible has the Best Post-Credits Scene Ever

Everything changed in Invincible's first "post-credits" scene, which perfectly tricked the viewer with our own preconceptions of the trope.
by Kyle Barratt 08/06/2021

This article contains spoilers for Invincible season one.

At first, I thought Invincible’s first post-credits scene was stupid. The opening episode of Amazon’s superhero animation quickly smash cuts to credits before returning for a post-credits scene (or mid-credits, I guess) mere seconds later, with a full 10-minutes of its runtime remaining. I’ve gotten progressively grumpy about these additional scenes over the last couple of years; they’re fine at the end of Marvel films but now every franchise has jumped on the bandwagon and even TV shows have them. I don’t need a tease for the next episode or an additional moment that could have easily fit in the episode itself every week. When I saw Invincible was going in that direction, I was disappointed, but that reaction only worked in its favour as those 10-minutes began to unravel. Using the post-credits format for the breathtaking sequence that ends the opening episode of Invincible was a trick. The show uses our preconceptions of post-credits scenes to shock us. They are such a trope that it lulls us into a false sense of smug security. A roll of the eyes and a sarcastic “Great, they’re doing this already”. But it soon became apparent that this wasn’t just an addendum to the episode or a tease for what’s next. It was an unveiling of what this show actually is. A peek behind the curtain that recontextualised everything we had just watched.

The sequence spends its extended runtime wisely and deceptively, introducing us to each member of the superhero team – and Justice League parody – the Guardians of the Globe. We’re granted insight into their personal lives and relationships, clearly establishing the characters as mainstays of the series, right? Especially considering the impressive voice cast of the team, all of which are former cast members of The Walking Dead, which may be a sly joke considering the title of that show describes the characters perfectly. They all receive a message and arrive at their headquarters to discover, albeit too late, that it was a ploy to assemble them in one location to be killed. In a shocking twist, Omni-Man, the Superman-like hero and father of protagonist Mark, is the killer, and we watch as he murders every hero in incredibly gory fashion before collapsing to the floor. Roll credits – for real this time.

I was completely taken aback by this ending. Not only with the villainous twist about Omni-Man but the graphic content too. The entire point of the post-credits scene is to tell you that this isn’t the show you thought it was. The effectiveness is not just down to the scene itself but the entire preceding episode. Before its final moments, the premiere is consciously straightforward and tame. A slightly generic superhero origin with themes of responsibility and identity and all that good stuff. A fun episode but fairly uninteresting, which we then discover was purposeful to make the ending even more shocking.

I’m not a fan of animated series being gory for gore’s sake but in the post-credits scene its amped up to the max for a reason. Seeing Omni-Man kill the Guardians of the Globe would be a surprise with 12/PG-13-level action, but watching him rip them apart, decapitate, and literally crush them in an incredibly bloody massacre was truly shocking. It sells his turn as a villain and shows how the status quo we thought the series was settling into was a lie. Mark is the son of the most dangerous man on Earth, not the planet’s protector. Before this scene the series was bright and joyous, with little blood and no bad language. Nothing to reveal it was an adult show at all. The post-credits scene changed everything.

Overall, the first season of Invincible is an entertaining watch and I’m anticipating the second, even though it never again reaches the height of that first post-credits scene. As it continues, the show sometimes relies on its extreme violence too much, and the post-credits scenes become as generic as I previously feared. When the gore is used to make a character’s death more impactful or reveal someone’s true intentions then its effective but the show often misuses it by making injuries that characters recover from very quickly just as bloody – if not more so – that killing blows. However, it always works when it’s used to horrify, with Omni-Man using Mark to kill a train full of people in the finale being one of the most wonderfully disturbing things I’ve seen. But I do hate the smash cut to the title card when someone is about to say “Invincible” every episode because that’s the kind of gimmick the first post-credits scene was subverting.

Yet, whatever mistakes the rest of the season made, the end of the first episode remains brilliant. Using the trope of an extra scene after the credits made us prejudge what the sequence would be only for it to be a trick to make its true content even more impactful. It’s a unique post-credits scene and the perfect inversion of what they usually are: divulging the truth behind what we had just seen rather than simply teasing what we’ll be seeing next. It reveals the truth after we’ve been caught in a lie, and that makes us invested in the story. We simultaneously feel like Mark because we too have been tricked but also now know more than him and want to stay with the story until he finds out what we’ve just bore witness to. And that made me click on the second episode faster than any generic post-credits tease ever could.

What are your thoughts on Invincible? What do you think is the all-time greatest post-credits scene? Let me know in the comments and be sure to geek out with me about TV, movies and video-games on Twitter @kylebrrtt.