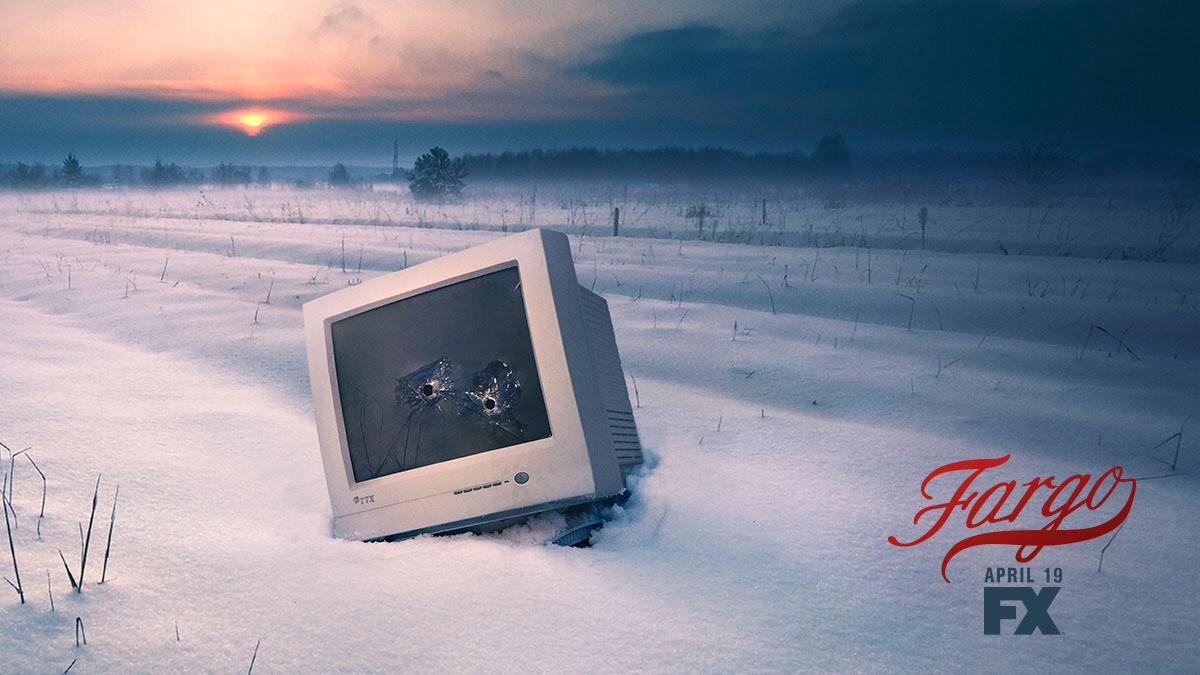 How the third season of Fargo explores the blatant lie which begins each episode both thematically and narratively.
by Kyle Barratt 22/06/2021

The first time I watched the third season of Fargo, upon its initial airing, I was befuddled by the opening scene. Despite being described as Siberia with family restaurants, 2010’s Minnesota is a long way away from an interrogation room in 1988’s East Germany. The scene sees a government official claim that the innocent man he’s speaking to is Yuri Gurka, a wanted killer, despite the man’s protests. Surely, how can the official be wrong and the lowly citizen be right when an official file says otherwise? He’s there for the truth, not some story. While the seemingly disconnected scene does tangentially connect to the season’s greater plot eventually, with an appearance by the true Yuri Gurka, on reflection, this scene is in fact putting forth the primary theme of the season, decrypting the lie which begins each instalment: “This is a true story.” 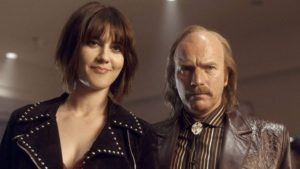 Fargo, and the works of the Coen Brothers, often feature tight, impeccably plotted narratives undone by almost baffling coincidences and chance encounters. A truth-is-stranger-than-fiction element that tramples on the idea of elaborate planning, like, say, a UFO disrupting a gang war in its penultimate hour. This third season is a little different however. This time the characters recognise these coincidences and chances and try to take advantage of them. To shape the narrative their way, becoming the storytellers themselves. They seek to create the truth behind this true story. Their truth. Season 3 is about the war between personal truth and objective reality.

“This is a true story” is a blatant lie but in the third season that’s the point. The show is more interested in what makes a story true, even if it isn’t. It’s a season of television where things happen but, because nobody sees them or the events aren’t recorded, for all intents and purposes, they didn’t happen. The reverse is true too. Lies are constructed and believed, the truth never being outed. Whereas Coen Brothers characters are usually swept up by these deceptions and struggle to navigate them, such as The Dude in The Big Lebowski, Fargo instead focuses on those manipulating the truth. Ray and Nicki, usually the types of characters to be plunged out of their depth in a world of deceit are, in fact, manipulators themselves. Ray dons a bad wig and suddenly people think he’s his twin brother Emmit, despite clearly not being, and he walks out of a bank with Emmit’s money with everyone none the wiser. In Fargo season 3, perception of reality becomes reality. Unlike previous seasons, the word “true” disappears before the other words in the “This is a true story” chyron that begins each episode. The theme of conflicting veracity and falsehood is embedded into each character from the very start as they realise and struggle to understand that they have been living a lie. Police Chief Gloria Burgle is coming to terms with divorcing her husband who has recently come out as gay. Emmit slowly understands that his ‘holier-than-thou’ attitude to his brotherly feud is wrong and, all those years ago, he did trick Ray into taking the superficially expensive car and keeping the stamps with extraordinary hidden value for himself. Even the car and the stamps are hiding their true nature! Ray himself works as a parole officer, the farthest end of the law where all the truth about the criminals should be outed by the time that they enter his purview. But that’s not true and his relationship with a parolee begs a question that is never fully answered: to what extent is their love genuine or a deception from Nicki?

This brings us to the season’s primary antagonist: the businessman, fabricator of lies, and creator of truth, V.M. Varga. Varga manipulates and murders his way into Emmit’s business, strip mines it for cash over a few months, and then leaves as if he was never there at all. When he needs make Emmit look innocent for the death of his brother in the eyes of the law, he fabricates a serial killer who kills people with the same last name and has two different MOs. The police buy it and the truth is never outed. Other than Gloria, as the season comes to a close that is what is believed to have happened. The objective truth around the murder is not revealed and Varga’s created reality becomes the “true story”. This echoes the events of the season’s opening scene, back in 80’s Soviet Germany, and it should. The real Yuri Gurka is Varga’s henchman and the truth believed by the government agent, the one in the official file, is implied to be another of Varga’s lies.

One of the tensest moments of the season comes when a police officer returns to the station to find Yuri Gurka searching for a file and a very quiet stand-off occurs in the dark. Gurka tells the officer to leave and that he hasn’t seen anything and, ultimately, he does leave and absolutely nothing comes of it. It’s a vital meeting between two characters that would be of interest to Gloria but it’s never mentioned again. And I love that. Yuri states during the meeting that the meeting never happened and the show, fully committing to the point it’s making about subjective truth, acts as if it never happened.

Happily, the show isn’t afraid to have fun with this theme of truth and perception either. In one scene a character states “Now you’re speaking English”, and then we suddenly cut to the next scene in which “Prisencolinensinainciusol” by Adriano Celentano starts playing, a song composed of deliberately unintelligible gibberish designed to sound like English to mock the release of American songs in Italy. Later in that same episode, a character is watching season 2 of Fargo on television. Is the third season ‘true’ when compared to the previous season or is the point that the entire series, and its ‘true story’, is a lie and the show is now acknowledging that? Varga tries not only to control the world around him but how other people perceive him too. If he lets them see him at all that is; a mere Googling of his name will get you killed. He states he’s a middle manager but, in truth, he’s the boss. Despite his massive wealth he wears cheap suits and flies coach. His image – his façade – is maintained for safety. He fears a Mongol horde; an uprising in the wake of the global economic crisis in which the rich will be flayed by the poor. The perfect representation of this point and his deceptive outward appearance is his bulimia. It’s not just some character quirk but actually another lie. He’s rich and gorges on the finest food yet cannot let it show. He vomits it back up to remain skinny, maintaining his image as one of the rabble, his rotten teeth being the only clue. He even hides what V.M. stands for. Why? The best theory I’ve seen is that they stand for the Latin words for truth and lie: verum and mendacium.

In Fargo, the villains can be pure evil, even supernaturally so. Varga is painted in such a way, especially the image of him using a knife to carefully open Christmas presents before wrapping them again, the only people who know he’s done so is the audience. He’s a modern-day monster. A creature of pure greed and utiliser of technology to a totalitarian degree. Varga seems to admire Stalin and Putin and the Soviet reality of truth being created and controlled by the state. Varga may use technology to gather information but this is how he comes unstuck in old-worldly rural Minnesota: his nemesis is Gloria Burgle; a woman invisible to technology. Whereas Varga tries to persuade people he doesn’t exist, Gloria actually believes she doesn’t. During her divorce and the death of her stepfather – the investigation into which turns out to be entirely, purposefully useless – she feels invisible and is rejected by the modern world. Automatic doors don’t open for her and hand dryers remain silent. She’s a character outside the modern world and so remains unaffected by Varga’s lies. As an indictment of social media and the lack of real, human communication, our hero Gloria is the only one not burrowing her head in her phone and is instead alert to the real crimes happening. In the season’s biggest and most abstract example of perception forming reality, Gloria is invisible to technology because she believes she is. Once stops believing that, she becomes part of the world again, able to go after Varga. Gloria’s objective truth vs Varga’s masquerade.

The season’s final scene mirrors its first. This time Gloria, now working for the Department of Homeland Security, is facing Varga and accusing him of his crimes. We know them to be true. We’ve seen the story play out with godlike omniscience, purely as an observer. Gloria tells a story about how in a few minutes agents will enter the room and arrest Varga, his crimes proven and justice served. Varga tells a story about how in a few minutes agents will arrive to let him go, his cover and control maintained, even apologising to him for their mistake. The season ends with an ambiguous shot of the door and a clock ticking towards one of these futures. What makes this scene exceptional is that, if perception does determine reality, it’s our perception that concludes the story rather than the characters’. The idea of truth has been pushed purely on us and we decide which story is true as the characters remain in Schrodinger’s airport basement. Which story is true? Whichever one we want.