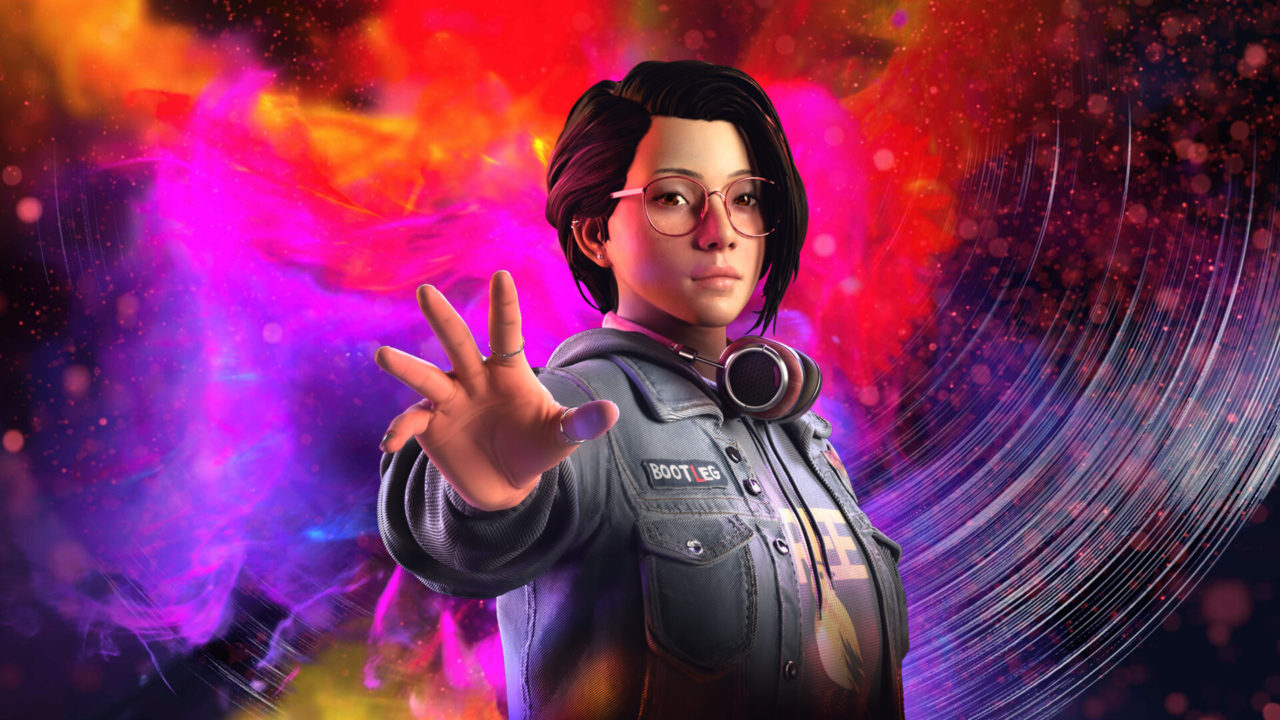 How True Colours utilities text messages and social media to create another potent outlet for the humour, sadness, and warmth of Life is Strange.
by Kyle Barratt 28/09/2021

Life is Strange is a feeling. Several games in, it’s easy to disassemble the formula of YA angst, romance, and superpowers the series uses, but doing so does a disservice to the finished product. When everything clicks into place, like it does with the most recent game in the series, True Colours, the storytelling transcends any contrived plotting and becomes greater than the sum of its parts. There’s such a powerful sense of atmosphere, location, and character, enforced through every aspect, from the visuals to the writing and the music too, that it feels like magic. The series is a warm hug, despite its darker aspects, and I never wanted Life is Strange: True Colours to end. This emotional narrative synergism, creating that brand-specific bittersweet melancholy, also includes the epistolary storytelling found throughout the game, most notably in the SMS and social media threads in protagonist Alex Chen’s phone. Everyone discusses the music choices and dialogue of Life is Strange, for good reason, but I feel the wealth of rich character and story detail found in the game’s onscreen text is an overlooked part of the magical mixture. Almost mimicking real life to a disturbing extent, the first thing I did when loading into a new chapter of the game was ignore whoever I was with and check the phone, reading through every message. And I’m glad I did.

First of all, the mere fact that these messages and conversations aren’t complete cringe is worthy of applause. There’s nothing worse than writers trying too hard to capture the voices of young characters and resorting to constant text speak and slang that hasn’t been used since 2005. True Colours manages to give its characters a natural voice that I never questioned. The writing styles of each character have been well thought out and remain consistent. Duckie, the lovable older man found in The Black Lantern, writes in a completely formal manner like he’s penning an old letter, and while it’s played as a joke, it’s never taken to a comedic extreme. Jed is casual but still includes punctuation and capital letters, something many younger characters don’t seem to hold in high regard. The way each message is written and the language used creates just as much a sense of character as the in-person conversations do. These optional, easily-ignorable conversations that you can scroll through at any time greatly informed my choices in key narrative moments; I’m sure I would have chosen differently if I hadn’t read them. Should I tell a specific character about Alex’s – my – empathic powers? The level of trust I have with that character in a text thread is just as important as the face-to-face scenes. For this choice I looked back on Alex’s message history with an old friend Mariela where she had clearly told her something big and then Mariela ghosted her. Maybe Alex revealed her powers or maybe it was her sexuality, depending on how you interpret it and your playstyle, and the reaction received is heartbreakingly relatable and impactful, regardless of whether it’s born from the supernatural or something intensely human.

These messages from Alex’s past give a profound insight into the character and her life before Haven Springs, which we wouldn’t otherwise get. There’s an old thread with a guy called Isaac which is a great little story in its own right. He and Alex begin a friendly, jokey tête-à-tête and it’s good to see Alex have a friend after what we know of her traumatic past. But, after developing a relationship, Isaac goes from being a friendly and helpful guy to someone clearly only interested in Alex for sex. What’s powerful about it is that Isaac is never openly malicious. He never snaps or dramatically drops his ‘nice guy’ persona. He thinks he’s being funny and affable but there’s an awkwardness and manipulation there. It’s executed very well and is surprisingly subtle. The messages present Alex’s past issues and reason for her lack of trust in a clever, intimate way. They build up why Haven Springs and the promise it brings is so important to Alex and therefore to us. Other than regular SMS messaging, Life is Strange: True Colours also has its own Haven Springs-specific social network called MyBlock. This constantly updating stream of posts, where every character you meet and interact with will post, comment, and like makes Haven seem like an actual small-town community that’s deeper than the single street the game lets you explore. Not only does it add an extra element of energy and life to the town you soon come to love, but MyBlock also allows your choices and conversations to ripple out through the community. There isn’t time to speak to every character after every choice so it’s a great way to see how you’re affecting everyone, and how they are affecting each other. If it was all face-to-face then every interaction would be between Alex and one or two other characters whereas this way, we can see how each character connects and speaks to everyone else, revealing their own web of relationships.

Proving what a powerful storytelling and character/location-establishing tool MyBlock is, in the first chapter, Mike Lollar, some unseen bastard, posts “Enough with all the transplants moving here! I don’t care if it’s good for the economy. I miss Haven the way it used to be.” What a way to make the player suddenly invested in your/Alex’s place in town. I wanted to write back some angry message defending Alex’s move to Haven Springs, which is exactly the response the developers wanted. MyBlock is a quick and easy way to do these things, a narrative shortcut that never feels unnaturally manipulative, but no less effective. Maybe more so because we all know the annoyance of online chat and trolls. Every now and then while playing True Colours I’d stop and read through any new messages I received but also reread some old ones. After Gabe’s death I’d go back and read the texts he sent at the start of the game, like an overly sentimental character in a hokey film. Messages that were once glib and thoughtless now holding so much weight. It’s not always the messages themselves that are powerful but the spaces between them. When you can see the amount of time before someone formulated a reply, when they contemplated and drafted a response. The pauses and what’s left unsaid are important. Even messages that are deleted or when a character will turn off replies to a MyBlock post. The fact that, despite a brief and undramatic text thread, Alex has blocked Dr. Lynn’s number tells us so much.

The ability to investigate Alex’s phone and read her conversations – essentially our conversations – is another potent outlet for the humour and sadness that defines Life is Strange storytelling. The warmth and wistful melancholy that comes from walking through Haven Springs and interacting with its denizens also emanates from the social media and SMS threads to create an engrossing experience which ranks among my very favourites of the year.

Have you played Life is Strange: True Colours? Were you affected by what you read on Alex’s phone? Let me know in the comments and be sure to geek out with me about TV, movies and video-games on Twitter @kylebrrtt.