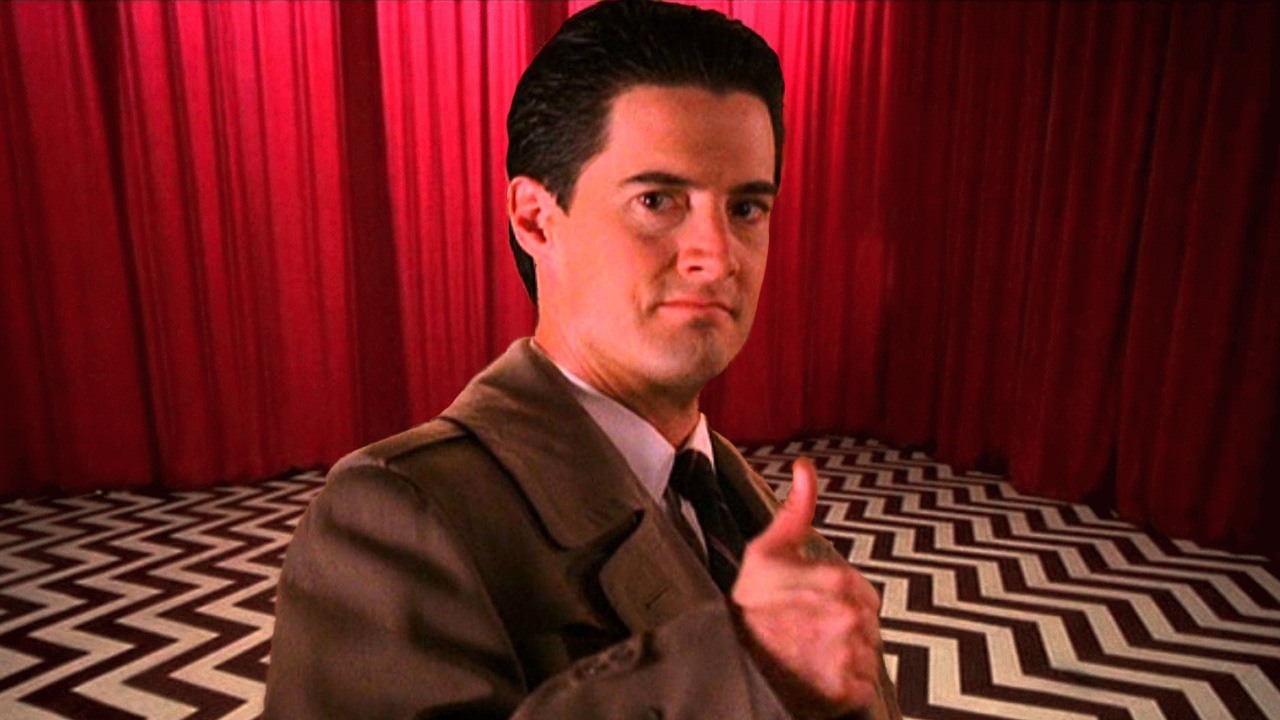 Rewatching Twin Peaks always seems like a great idea. The mystery of Laura Palmer’s death leads to a bizarre mythology and a multitude of storylines and tones ranging from surrealist horror to soap opera parody. I love the show and, especially when counting the modern season, rank it as one of my favourite television series. But there’s a catch. Whether watching for the first time or rewatching for the umpteenth, the second season of Twin Peaks is a struggle to get through. Don’t listen to those who’ll tell you the entire 22-episode season is a dud, it’s not, and, in fact, the first nine episodes are among the best in the series. The season even ends well with five good episodes leading to an all-time classic finale. But the middle of the season is an almighty rough patch, to put it mildly. Watching that run of episodes feels like you’re spending 25 years in the Red Room and you’ll want to smash your head into a mirror by the end of it. 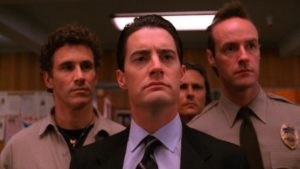 Creators David Lynch and Mark Frost were forced by the network to answer the famous ‘who killed Laura Palmer?’ mystery early into the season and, well, no one really knew what to do next. Windom Earle and the Black Lodge would eventually resuscitate the show but the excessive episode count meant they had to fill time. Well, other writers did because Lynch and Frost were off directing movies before they eventually returned for the finale. The episodes of the dreaded rough patch became dominated by soap opera storylines with none of the previous parody, goofy comedy, and bizarre excursions. Crucially, that sense of underlying dread that is so vital to Twin Peaks was missing.

Yet, on my most recent rewatch, I tried to focus on the good. The mini successes in the greater failure that can make the worst episodes at least watchable. I present to you a survival guide for Twin Peaks’s season two rough patch.

The inhabitants of Twin Peaks are a strange bunch, whether part of the core plot or one of the many orbiting subplots. Much of the enjoyment of the show comes from watching them interact and the rough patch actually offers the opportunity for lesser-seen characters to take the spotlight and for quirky combinations to come together. Leland’s death may be the beginning of the bad episodes but at least his funeral gives us more of Sarah Palmer, a shockingly underutilised character in the show’s original run. We even get to see Major Briggs and Dr Jacoby interact at the funeral. If that’s not worth watching the episode for I don’t know what is. Even Pete Martell is plucked from the tiring Catherine vs Josie storyline and given a key role in Cooper’s deadly game with Windom Earle, allowing for some fun interactions. 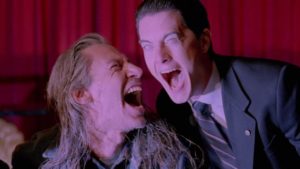 Probably the key element that makes watching these episodes vital, especially on a first viewing, is that so much of the show’s mythology comes from them. We’ve had dreams and visions before but the rough patch offers the first mentions and explanations of the White Lodge and Black Lodge. Even the “shadows selves”/doppelgangers are set up, which will become a massive part of the series. Major Briggs’s role in Project Blue Book is also explored. Even one of the most throwaway storylines is retconned to be a fascinating piece of the show’s mythology. The wedding and death of Dougie Milford will make you question if you still want to watch the show, until you read Mark Frost’s book The Secret History of Twin Peaks and realise it to be of huge conspiratorial importance.

Performance reigns supreme during the bad batch of episodes, even if the storylines meander. Jean Renault may be a placeholder villain between the terrifying Bob and the cartoonish Windom Earle with little to do, but at least Michael Parks is chewing the scenery. Dick Tremayne and Andy thinking that Little Nicky, a child conceived of rape, is the Devil is an atrocious plotline, but it’s impossible not to be charmed by Ian Buchanan’s smile and if you focus on him you can get through it. Even the long, twisty Josie storyline which I still don’t totally understand is worth it for David Warner’s performance, an actor I love. Double points if you can identify the accent he’s supposed to be doing. We even find out that it was Josie who shot Cooper back in the season 2 premiere. It may be a mystery long since forgotten about but it sees the welcome return of Albert to solve it. 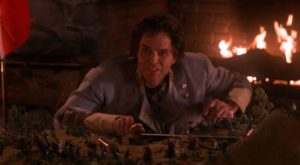 While I love the opening arc of the second season, Audrey’s story is a low point. She’s kept by herself, drugged up at One Eyed Jacks for far too long. Thankfully the rough patch sees her taking up a position of power at the Great Northern, the show forgetting that she’s supposed to be a schoolgirl, making her the bright point of the Ben Horne storyline. Ben is obsessed with Feng Shui and becomes deluded, rather uncomfortably, into believing he is a civil war general fighting for the South. If you want to read far too much into things, it could be argued Ben seeks to change his own past by revisiting history and trying to change the outcome of the war. But really, it’s just a useless aside. Yet focus on the supporting characters and you can get through it. Audrey is great and Bobby working for Ben Horne is a brilliant idea. The more criminality he pursues in the original show makes his eventual turn towards law enforcement even better.

James Hurley rides his motorcycle around the country, sleeps with femme fetales, and get embroiled in lame Hitchcockian murder plots. Even I can’t come up with a defence for Hurley’s storyline, and thankfully the writers eliminate the character from the final few episodes. It’s Twin Peaks at its worst. But! The other storyline that people complain about actually brings about some laughs. Nadine thinking she’s a teenage girl after her suicide attempt, and having super strength for some reason, is good fun. Sure, too much screen time is dedicated to it but I find it genuinely amusing, especially when Nadine’s actress doesn’t look too much older than the others playing high schoolers. And hey, it even finally gives Mike something to do. 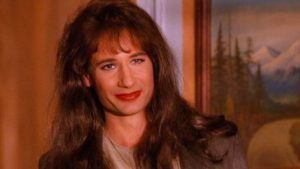 Season 2 gives us the ‘Dale Cooper Tartan Saga’. The FBI agent is placed under investigation, having to take off his suit (as well as badge and gun) and replace it with tartan when he’s deputised as a Twin Peaks sheriff. ‘If Cooper is in tartan it’s a bad episode’ isn’t a bad rule to follow but there are some things to enjoy. Firstly, he goes house hunting and I can’t get the idea of a crossover with Homes Under the Hammer out of my mind, Dion Dublin showing Coop around Dead Dog Farm. The second is Denise Bryson, the transvestite, later transgender, DEA agent. Oh boy, a trans character in an early 90’s show? Surely, we’re in for some awkward pulling-at-the-neck-of-shirt cringe moments, right? Wrong! Most of the storyline has aged surprisingly well. Cooper misnames her once, apologies, is forgiven, and the two continue as friends. Cooper is immediately accepting. It’s a wonderful moment and Denise is a great character.

Episode 22 (overall, not of season 2) divides opinion. And by “divides opinion” I mean everyone hates it but I like it a lot. Diane Keaton is guest director and attempts her best David Lynch impression behind the camera, with results both wonderful and strange. She uses every trick in the book to try and make the best of bad material, and she succeeds. The episode wraps up both the Ben Horne civil war and James Hurley murder storylines and almost makes them interesting. There are weird fades in the editing, odd repeated close ups, camera pans and zooms, slow motion, fast motion, changes in frame rate, and even visual comedy gags. It’s all utterly bizarre but wholly watchable, especially during the plodding rough patch of episodes. It could be argued that it’s the funniest episode of the entire series. It may be the lowest rated episode of Twin Peaks on IMDB but, honestly, it’s one of my favourites of the second season. 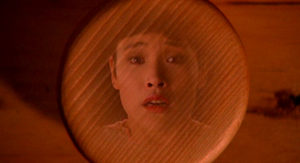 Post-Episode 22, the show begins to pick up steam again. Josie is killed by BOB and turns into a wooden draw knob (just another day in Twin Peaks), James rides off into the sunset for good (or at least 25 years), and Cooper puts on his suit again. Does this bad run of episodes deserve the reputation it has? Honestly, yes, it’s bad, but there are enough things to enjoy to keep you sane until the final few episodes of Lynchian madness. And even as someone who prefers the dark, intense style of Twin Peaks that Fire Walk With Me ushers in, when I’m in the mood for some of that classic Twin Peaks atmosphere and mood, even these terrible episodes can quench my thirst like a damn good coffee.

What are your thoughts on the second season of Twin Peaks? Let me know in the comments and be sure to geek out with me about TV, movies and video-games on Twitter @kylebrrtt.

Tanked Up – The Hidden Depths of a Canadian Breakfast

First Looks – The Life and Suffering of Sir Brante (pt. 1)