An unnecessary but appreciated swan song that, despite its protagonist, offers little new other than a fascinating Macguffin twist and a stunning open world.
by Kyle Barratt 19/04/2022

The Lost Legacy is one final slice of Uncharted. It’s not a necessary piece of the puzzle or particularly bold in any of its choices; it’s a smaller, lesser affair than Uncharted 4, and is simply an excuse for one last ride. It almost seems a waste to develop so much fantastic stuff for the fourth game in the series and not use it again so why not cram as much into another experience that is somewhere between a downsized game and an expanded standalone DLC? Nate’s story may be over but The Lost Legacy is an entertaining swan song for the franchise, playing like a condensed greatest hits tour, from the 4×4 exploration of Uncharted 4 to clambering up giant statues of ancient civilisations (missing from the previous game) and finally a remixed train level harkening back to the series’ greatest set piece from Uncharted 2. While The Lost Legacy’s gameplay and storytelling is very similar to that of Uncharted 4, it’s Uncharted 2 that is perhaps the biggest inspiration. That first sequel is my favourite of the series and you can feel that it’s probably the developers’ too, with not only Chloe from that game being the new protagonist but also the similar locations and villain. The first hour or so takes place in an Indian city which feels reminiscent of the Nepali city in Uncharted 2. It’s a solid opening that feels purposefully contained, if not claustrophobic, to make the rest of the game seem even more expansive. The dark streets and the vista of the burning city feel almost like a horror game at points, the most the series has dabbled in that genre since the original game, and Naughty Dog’s experience with The Last of Us only heightens the tension. The only real negative about the opening is that it introduces the lock picking mechanic, which is weak and quickly becomes irritating.

The Western Ghats are the real reason this game exists. Uncharted 4 introduced the delicate balance of linear open worlds. The Madagascar section was something new for the franchise and so much fun, taking a Jeep off-road to explore missable areas along the main path. The Lost Legacy seeks to one up that experience and the heart of the game is a beautiful and vast open area. The mentality was clearly “let’s do the Madagascar chapter again but even bigger and more open and we’ll figure out a story that gives us an excuse to do it afterwards”, and I’m not complaining. The Western Ghats are so much fun to explore. There are multiple enemy encounters and puzzles dotted across the landscape, and the player can choose to take on the three main temples in any order they wish. Replaying the game, I don’t think I had ever gone to the central tower first before, and while it tells you of the various places you can go, it’s not necessary and I think the experience is better without it. Just drive and explore. However, the side mission of collecting all the tokens is a little reductive and feels more like a cheap Assassin’s Creed way of filling the world. The characterisation in The Lost Legacy hinges on a classic ‘odd couple’ relationship. Chloe is the quippy talkative improviser and Nadine is serious and quiet. Of course, they become friends over the course of the game and more well-rounded as they learn about each other. I don’t mean “of course” in a purely dismissive way, but this is a fairly stock character journey we’ve seen many times before. Thankfully it is done well and I like that almost the whole game has only two key characters to really build up their dynamic. It’s the more subtle, smaller moments that really make their relationship sing. Them going from shouting at each other to laughing together a few cutscenes later is handled competently and relatively believably but it’s the micro-interactions during gameplay, like a hand offered but not taken while climbing, that much more cleverly builds the tension and then the eventual rapport.

The Lost Legacy proves that Uncharted doesn’t need Nathan Drake to succeed, something I hope Naughty Dog keep in mind for any eventual reboot, but the ‘legacy’ of Nate is perhaps not buried deep enough. Personality-wise, Chloe is very much like Nate and while I do really enjoy the character, I wish the new Uncharted protagonist felt even more like a new Uncharted protagonist. Nadine thankfully is a very different type of character and much better served here than she was in Uncharted 4. However, both Chloe and Nadine’s backstories and family drama they are fighting through are similar to Nate’s. It’s all about their personal family legacy. Nate was fuelled by his mother’s passions and his persona as a Drake. Chloe is similarly following her father’s last quest before he died. Nadine learns to let go of Shoreline, her father’s business, and find her own legacy. It’s all good stuff, particularly when it leads Chloe on a path of commitment, honour, and culture rather than greed, but it is repetitive. After replaying all the games, I don’t think there’s ever been a great Uncharted villain and The Lost Legacy does nothing to buck the trend. Asav is a warlord leading a resistance force against the Indian government, something the game treats disappointingly apolitically. He’s like a subdued version of Lazarevic from Uncharted 2, with a soft voice perfect for ASMR and a purposefully unassuming profile with glasses and a buttoned-up shirt. But when shit hits the fan, his glasses are revealed to be an affectation and he’s a brutal fighter. It’s a twist I guess but a fairly dull one. Despite these minor characterisations, Asav feels generic and all he does for most of the game is monologue about kings and bloodlines and rebellion and all the fanatical buzzwords we’ve heard a million times before from more interesting characters. Chloe is lectured at gunpoint three times over the course of the game and it’s three times too many. In his final scenes he becomes obsessed with race and calls the multiracial protagonists “mongrels”, which feels like an odd turn that should either be cut or properly explored.

The central Macguffin is the Tusk of Ganesh which seems uninteresting for a large portion of game until the writers use it to say something profound. We’re led to believe that the Tusk is a symbol of power in some vague way and that Asav will use it to somehow rally people to his cause but then, when he finally gets it, he simply sells it. It’s a really fun twist that shows how little he cares for his people’s history and culture, only wealth and weapons. This unlocks something inside Chloe and her motivations change from greed to preserving a cultural artifact. The Lost Legacy, the finale of the Uncharted series, ultimately becomes a condemnation of how these stories, like Indiana Jones, treat such artifacts. They don’t belong in the hands of an adventurer, a thief, a collector, or a museum half the world away. They belong to the people. I love this idea. But! Because the game is the greatest hits of the series, I wish the artifact also had some sort of supernatural aspect to it, especially with Uncharted 4 treating itself far too seriously to embrace the paranormal elements of the series. Playing The Lost Legacy I came to the realisation that I don’t like Sam Drake. Outside of his vital narrative importance in Uncharted 4, he’s just an annoying character with none of the charm of his brother or Chloe. There’s a fine line between charming and prickish and he’s fully stepped over it. The reveal of Sam as part of the plot does do a decent job of damaging the relationship between Chloe and Nadine, before it grows back stronger, but outside his role as a single plot mechanic he just hangs around and is an unnecessary third wheel. The return of Charlie Cutter would have been more interesting, or even Sully, who you can never go wrong with. Sam is also overwritten as a stereotypical male character to create more tension with Nadine, mentioning ‘balls’ every few lines and saying things like Asav “hits like a girl”. I’m so glad the decision was made to have The Lost Legacy be a Chloe game rather than focus on Sam because I doubt I could have made it to the end of it.

The developers throw everything at the last action sequence. It may be a reductive action blockbuster ending, stopping a bomb from entering a city and exploding, but who cares? The game has said everything it has wanted to say, the character arcs are fulfilled, and so the scene is treated as a final playground of crazy Uncharted action as one last hurrah for the franchise. It’s a mixture of the train set piece from Uncharted 2 and the car/bike chase from Uncharted 4, and while not as refined or well-paced as either of them, it is a spectacular finale and very enjoyable to play. I found the infinite ammo cheat a vital addition to fully enjoy it however. It needs to be as bombastic as possible. 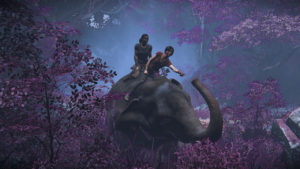 Perhaps The Lost Legacy’s greatest moment is when, at the most strained point in Chloe and Nadine’s relationship, the two come across an injured elephant and free it from a trap. The two ride it across a stunning landscape and watch it rejoin its family. It’s an amazing scene of beauty and wonder in the middle of all this darkness and violence. It’s also very clearly a repeat of a giraffe moment from The Last of Us. That’s perhaps the defining feature of The Lost Legacy: it is composed of moments and sequences that we’ve seen before, played before. It’s entertaining and worthy of the Uncharted name but by its very nature cannot compete with the core series. It is one final homage and goodbye to the franchise, a greatest hits compilation that may threaten to be too indulgent if I wasn’t sad my revisit of the series is already at an end and grasping for all the Uncharted content I can get.

What are your thoughts on Uncharted: The Lost Legacy? Let me know in the comments and be sure to geek out with me about TV, movies and video-games on Twitter @kylebrrtt.