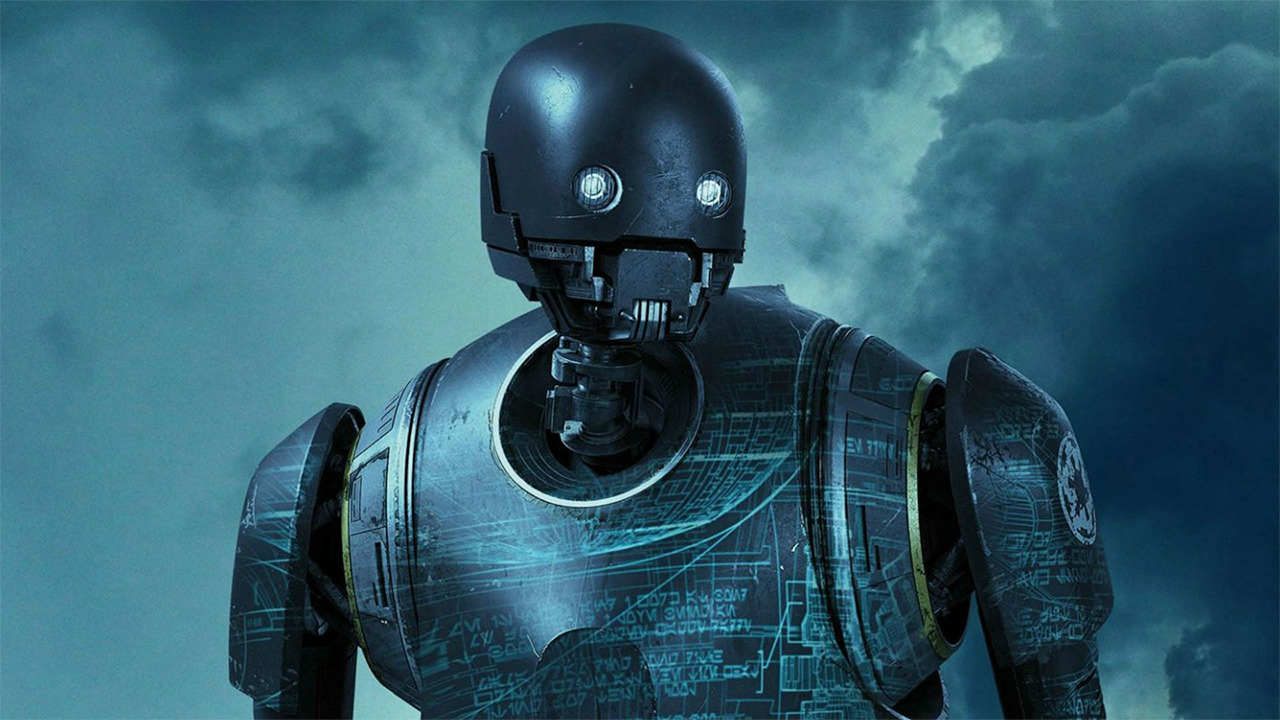 By reverse engineering his final words, Andor turns K-2SO into the emotional, philosophical, and thematic heart of a show in which he doesn't even appear...
by Kyle Barratt 29/11/2022

Andor is dark. It’s the Deep Space Nine of Star Wars shows, examining and questioning the key tenets of the franchise in a serious manner. “Oppression breeds rebellion” as Luthen says and we see an awful lot of that oppression to make the eventual rebellion all the more powerful. Yet Star Wars is about hope and Andor is still Star Wars, even if showrunner Tony Gilroy sometimes wishes it wasn’t. There always needs to be light and the light of K-2SO shines very brightly throughout the series.

Rogue One took itself seriously and had a darker tone but Andor, the prequel, takes it to the next level. On the surface it can seem even less Star Wars-y. There are fewer aliens, more realistic planet-scapes, and no big pulpy ridiculously-named Death Star (or is there?). There’s no Bor Gullet. God, I wish Bor Gullet had appeared. In Rogue One most of the laughs and general levity came from Cassian’s reprogrammed imperial droid, K-2SO, but he is nowhere to be seen in the show’s first season. But while he may not appear in the flesh – or metal – his influence is everywhere. Somewhat amazingly, he has become the thematic heart of the show, perhaps more so than Luthen.

A robotic heart may seem like an oxymoron but it’s true, and has been so since the original film in 1977. B2EMO, the bestest boy in the galaxy, is the newest addition to the droid family. Has there been a failure yet regarding cute droids in the Disney era? In a way, it’s hard not to see B2 as a forebearer, if not a placeholder, for Cassian’s eventual relationship with K-2. The droid allows Andor’s softer side to emerge, especially in those vital early episodes full of character building. It does beg the question if, in some way, B2 will literally become K-2. I hope not, I feel it’s an unnecessary addition, but I do wonder considering the role of the droids is so similar. We’ve seen it before in Solo when L3-37 was uploaded into the Millennium Falcon, becoming part of the ship. Could B2 be transferred into a KX security droid, become part of K-2’s personality?

Yet Andor is the antithesis of Solo. They are set in the same rough time period, deal with similar themes and ideas, and even focus on analogous character arcs, but the way they tell their prequel stories is completely different. Solo is a plot checklist, going down the list of all the things that we know happen to Han. Andor instead reverse engineers the emotional journey, starting with a very different Cassian than the one in Rogue One and getting him mentally and philosophically to that place. So despite K-2SO coming towards the end of Cassian’s life, the end of this story, everything now stems from him and Cassian’s relationship with him. Stems from what K-2 represents. Jyn and the rest of the crew are important too, especially for Cassian’s journey in the film itself, but the whole series is building to the man we see at the start of the film.

One of K-2SO’s final words runs throughout the first season as a thematic lynchpin: “Climb!” The series has done a great job as a prequel, offering only a couple of knowing teases for what is to come without going too far. The appropriation and use of this single word is fantastic. In the film it is one of the last things K-2 says to Cassian, telling him to climb the tower to escape with the Death Star plans. Yet now the word means something deeper. Each use is incredibly meaningful – it’s the heart of the season. It’s the last thing Nemik says to Cassian during the Aldhani escape; it’s used as a rallying cry by Kino during the prison escape; Cassian himself then repeats it in the finale to tell his friends on Ferrix to leave. It’s literal each time but also metaphorical. Climb out of oppression, rise above it, grasp at freedom. It’s a call for rebellion. A key theme of the series all stemming from K-2SO.

I’m very curious to see K-2 appear in the second, and sadly final season of Andor. I hope it’s not until the final arc of the series, though. There are enough characters to deal with at the moment; more survived the first season than I was expecting. K-2 is an endpoint for this story, not just in terms of plot but the emotional, philosophical, and thematic end too. With the repeated word ‘climb,’ it’s clear all these people and experiences inform Cassian’s point-of-view (even in Rogue One he loves repeating what other characters say to make a point) and he in turn imprints it all on K-2SO. The droid is the end product of Cassian’s growth as much as Cassian himself.

What are your thoughts on Andor? Let me know in the comments and be sure to geek out with me about TV, movies and video-games on Twitter @kylebrrtt.