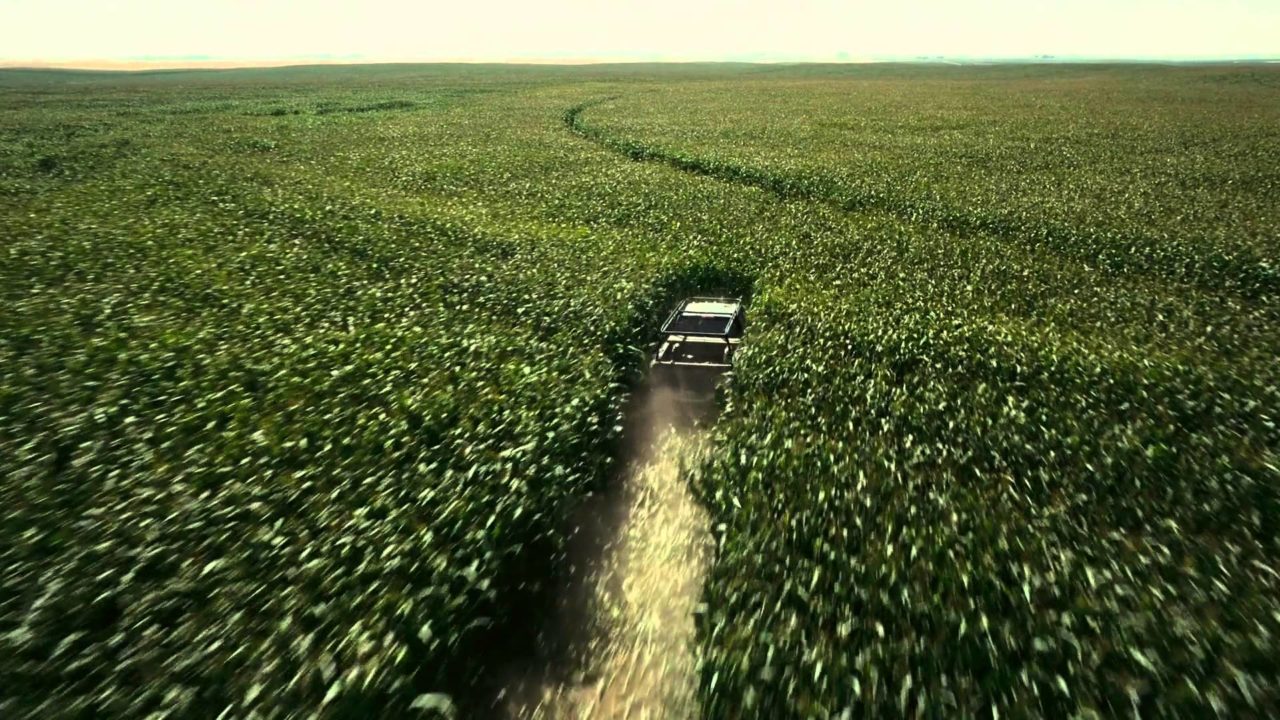 Despite Interstellar having several other scenes that are far more breathtaking visually-speaking, the scene stuck with me after I left the cinema.
by Guest Author 07/03/2016

There’s a scene I remember vividly from the Christopher Nolan movie Interstellar. Cooper and his kids notice a low-flying drone and decide to follow it in their car through a cornfield, despite having a flat tire. During the chase his son almost drives the car off a cliff, but manages to stop it just in time. They get out of the car and even though his kids think they lost the drone, Cooper had managed to gain control over it via his computer in the car. He sits there with his daughter Murph and lets her control the drone and land it in their proximity.

There is something quite spectacular about this scene. Not only is it a well-directed, fast-paced scene that could have easily lost momentum, but it also ends up being the perfect example of making the most out of something fairly ordinary. The music is astonishingly beautiful – arguably the best song on the soundtrack – and makes the sequence, at least in my opinion, out of this world (no pun intended). Despite Interstellar having several other scenes that are far more breathtaking visually-speaking, the scene stuck with me after I left the cinema.

What Nolan and composer Hans Zimmer managed to do was take something somewhat mundane – a car chasing drone through a cornfield – and turn it into something beautiful. And I believe that if we look at the scene more closely it not only captures the entire story of the movie, but also provides us with a lesson in life.

Imagine you’re Cooper. You’ve come to a halt in life. Your car, the vessel in which transports you through life, your thoughts and your actions, have left you at a full stop. There’s a hole in your tire – you were defeated by an obstacle. The children, the most important people around you, are still there, trying to help you get going. Then you see something – a dream of yours, a goal, or simply a feeling- and it was so close you could almost touch it. And you want to touch it, feel it, have it. So you get in that broken vessel and in that moment passion clouds your reason, and you realize that just because something’s broken doesn’t mean it won’t work.

The car starts, and you get going, despite the tire. It’s a tough ride – not only are you trying to manoeuvre a broken vessel, but you’re yet again faced with the obstacle of not seeing your path clearly. The corn whips the windshield, as the world tries to make it seem impossible for you to move forward. All you can do is have your eyes on that dream and hope that along the way you won’t end up losing it. The people that matter in your life are right there, helping you, supporting you. And for some reason you know that everything will be okay.

You’re blinded, but that’s okay, because sometimes in life not seeing your path clearly can end up being the only way of getting onto a new one. It’s those types of fears that you encounter, of being blind, lost and bewildered, that will make you feel alive again. When you’ve lost so much and feel like you can’t move because of your flat tire…it’s in moments like these when you decide to just go for it, try without fear of failure, rather knowing you CAN do it…that’s living.
You can’t see anything but that one dream in the distance, and if you decide to follow it, the cornfields that keep you from seeing anything that lies ahead won’t even matter – you’re strong enough to break down those obstacles, even with a broken vessel.

The clouding of reason can sometimes be the only way to live, for reason can limit us, drown us in doubt, leave us standing still.

Then comes the cliff, and you stop – there’s no more going forward. But that’s okay because right before you is your dream. You could have failed and fallen off the cliff, but you chose to trust yourself. Sometimes you stop too far away. And sometimes you might be too late. But you didn’t fail this time. This time it was too important. Time to get out of the car and enjoy your victory.

I might be reading too much into this particular scene, but for some reason it changed a lot of things in my life. In a way it told the entire story of the movie. Cooper’s chase for something that will fix things, a loved one by his side, a halt before realizing the answer was there all along, and then success in finding that thing at a place where few dared to go.

And the object, the dream, is still foreign and came out of nowhere – just like those most precious dreams and passions we encounter in life.

Some people call those for Downloads, when a thought or idea suddenly drops into your head. Your heart starts to skip, you can feel it through your entire body, a tingling and heightened sense of being. Few however act on it. Reason tells them not to, excuses are made up, fear holds them down and they decide to merely linger on the idea until they’ve analyzed it too much. Then it’s either impossible, or the chance to do it altogether has passed.

Right now, I’m driving through a cornfield of my own. Sometimes I have to hit the brakes, and at some points the past few weeks I’ve stopped the car altogether. I’ve gotten out of the car and found comfort in people who offered me fuel when I thought I was about to run out. It is exhausting to push the gas pedal, but sooner rather than later I know it will be worth it.

I can see a road of bliss and comfortable solitude in the distance, but even if it wasn’t there, the hurt in my body, the lack of sleep and long hours working, the sacrifices made to pursue my dreams – it will all be worth it. For even if I don’t reach that exact road I think I should aim for, I know the speed I’m gaining will soon enough lead me somewhere, whether it be to where I want to be or to exciting and unfamiliar places where I will, eventually, find peace and fulfillment.

And it’s nice to have the wind in your hair and letting go of reason from time to time.

I hope you’re feeling it with me. I hope you’re pushing on the gas and not the breaks. I hope you can feel the jolts ever time you think about that dream of yours, and that Reason isn’t preventing you from doing so.
I hope you find a dream to chase through a cornfield too, the motivator, in whatever shape or form, that reminds you that life is short and precious.

You have more tools to get there than a lot of other people in this world. Don’t let the gifts you have received along the way go to waste.

Let go, drive fast, be fearless and let life show you the way and not the other way around.

Oh hi there! I’m Sofia, aka Freebird, and you can read my questionable attempts at what some (me) considers humour, lists of shit and other ramblings here every week! If you wanna read stuff I’ve written as a video game and film journalist, check out my website, or hit me up on Twitter so we can discuss love, life excitement and whether or not you think dogs talk to us in baby voices, like we do to them.