Could the console wars provide the next 'battleground' in the war against Terrorism?
by Mete Redif 17/05/2016 This weekend I took time to visit my first love (Sorry Vicki and PS4) at Old Trafford in anticipation of the curtain call to the 2015/2016 Premier League season. Now if you aren’t a football enthusiast such as myself or been living under a rock, you may not have heard that the match between my beloved Manchester United and Bournemouth was abandoned after a suspect package was found in the ground. A mobile phone strapped to pipes with wires hanging out of it meant that a full “Red Code” evacuation procedure was put in to place. A controlled explosion was undertaken inside the stadium and thankfully nobody was harmed. It has been confirmed that the package was not ‘viable’ and was actually left behind during a training exercise (somebody is getting fired) but at the time it felt very real.

It got me thinking; with football being one of the pillars of British Culture and that of the modern world, it is unfortunate that in the current state of the world that we fear for the safety of the public in large congregations.  Now I am by no means saying that video games are regarded as highly as football in modern day culture (not far off), but what would happen if those of a misguided mentality decided that their next target would be video games? “Attacks” on the gaming industry are nothing new. Take a look at the PSN/Xbox Live and Lizard Squad scenario where mass DDOS attacks rendered newly unwrapped consoles during Christmas last year useless. But these attacks were more of a nuisance. An annoyance. A middle finger to the man- purely because they could. Going back a bit further to 2011, we have the PSN being hacked by an “external intrusion” that reportedly managed to claim the credit/debit card details of over 2 million users.

So could there ever be a scenario whereby gaming could be used to “attack” and harm people either individually or on mass?

I am by no means going to provide any technological references as to how this may be the case (as I just don’t know enough), but it’s a disconcerting thought. There were/are rumours on the internet how some of the major intelligence agencies have monitored (or continuing to do so) online gaming communities as intelligence suggests that they are used for terrorists to communicate with each other. In the investigation of the Paris Terror Attacks, it was said outright by Belgian federal home affairs minister Jan Jambon that PS4 is used by ISIS to exchange messages; quoted as saying that “Playstation 4 is even more difficult to keep track of than WhatsApp”. 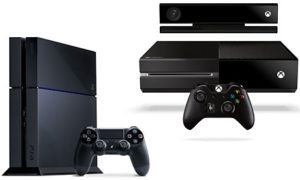 There is no suggestion here that we should be fearful of our games consoles transforming into terrorist Decepticon’s hell bent on causing grievous bodily harm to their owners, but we are talking a network of approximately 100 million consoles all being connected. All of these consoles exchanging information with each other at the speed of light; exchanging information which he authorities struggle to monitor (so it seems). What if one of these consoles is connected to a network that happens to link onto a government server or a power plant?

We know that the modern day console is used for training purposes within the military so it’s not a farfetched concept to say that terrorists are doing the same. And with VR on the horizon the possibilities are pushing the bounds of the human imagination, but unfortunately there will always be those that look to deploy that in the wrong context.

It’s all a little bit ‘Sci-Fi’ I must admit but how are we, gamers protected from these sorts of scenarios? Of course our ISP will have security measures as well as the major console companies having something on their own end, but how long will it be until the gaming community faces its own attack by the likes of ISIS? It’s a little unclear to see what terrorists would gain from this sort of action but I have a feeling that the backlash would be incredible. I doubt a ‘call to arms’ would be sounded (although you never really know), but would you pick a fight with a community without borders whom share in the same idealistic views on pixelated entertainment? After seeing the Xbox One vs PS4 arguments rage like wild fires any person that does is either incredibly brave or ineptly stupid.

How would it happen?

When would it happen?

Could it even happen?

But can it be ruled out?

So it’s down to us, the gaming community to vigilant for our own interests but pretty much for those of all around us. A call to arms?  I think not. A wake up call? A must.

Any theories of your own you would like to share? Why not give me a 140 character message on the Twittersphere @MeteCritic