Welcome to the fifth entry in this series of recommendations; which is a project that began a few weeks ago with A Beginner’s Guide to Comic Books. This will be the final comic book within the Standalone Series category, as after this week we’ll be moving on to some longer runs of 4-6 volumes in length. There’ll be a few more mini-series showing up as extra suggestions on future posts, but this is the last time one will be the main topic of discussion, so we really need to go out with something truly ground-breaking… 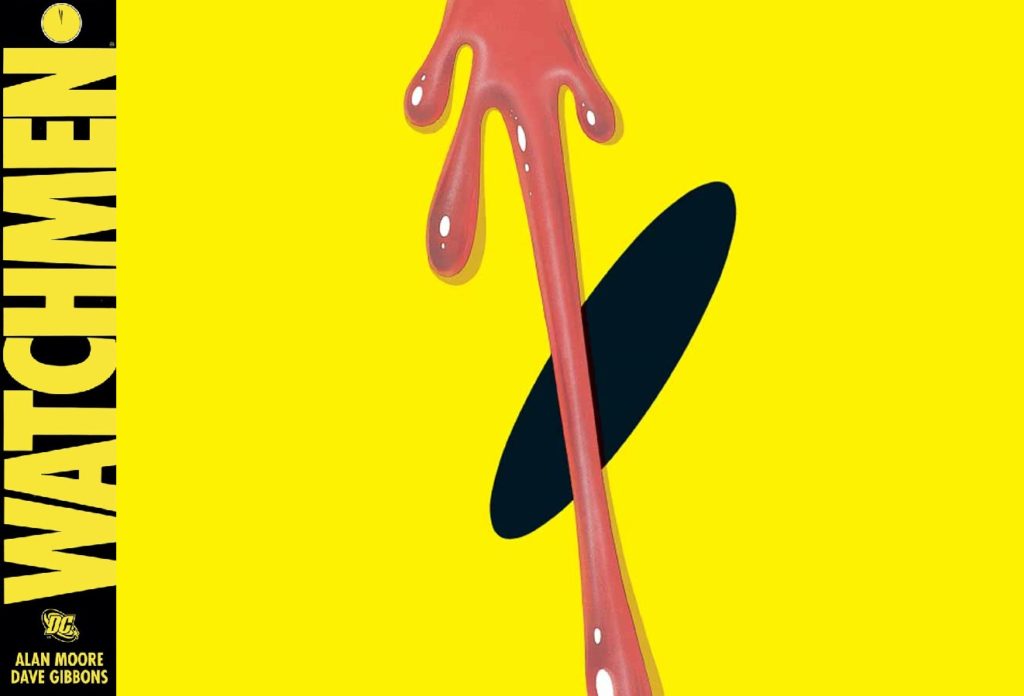 Comics as a storytelling format have never been in the mainstream; over the years these bastard stepchildren of film and novels have learned their place, sticking to the fringes where they belong. They’ve happily stood on the sidelines as movies, TV series, toys and T-shirts adorned with comic book characters have claimed all the glory and financial success.

But every now and then a comic series transcends the medium and achieves mainstream recognition, and a prime example of this is written by anarchist-magician Alan Moore, with art by normal-guy Dave Gibbons. Watchmen is a superhero story that deconstructs the superhero genre (if there is such a thing), creating a realistic world where normal people dress up and fight crime, then showing what happens when a real person with incredible powers turns up.

It is an intricately structured, masterfully told story that is so full of detail, parallels and themes that it’s impossible to take it all in at once. This story can be read five times over and feel different on each occasion.  The story is a conspiracy within a murder-mystery, set mainly in an alternate-history version of the 1980’s, when the second generation of costumed heroes have hung up their tights, as the time and matter controlling Dr. Manhattan has made them irrelevant.

Anyone who has seen the 2009 Scott Snyder movie will know the broad strokes of the story, but the film couldn’t possibly capture everything the comic has to offer. The brilliance of this story is that it’s designed as a comic book, and it was long considered unfilmable because it was never meant to be adapted into a different format. The only way to experience the full impact of this seminal work is to frisbee your DVD out of the nearest window, buy yourself a Trade Paperback

, or (if you’re feeling fancy) the Absolute Edition

, then put it in your eyes, page by glorious page. Watchmen was Alan Moore’s last hurrah in American Superhero comics, as after finishing that story he felt he’d said everything he had to say on the subject. To find his most brilliant work prior to that, we need to go back to a time when he still had plenty of things on the tip of his tongue.

Swamp Thing isn’t a typical superhero; he doesn’t wear a cape, or have a logo on his chest, in fact… he’s a bog monster. When he was conceived by Len Wein a decade earlier, Alec Hollund was simply another victim of a science experiment gone wrong, but in Moore’s hands he was deftly reconstructed into something much deeper and more interesting. This run takes place over six volumes, and every story arc feels like a re-imagining of the character in some way, as his powers and abilities develop, secrets are revealed, and Swamp Thing’s place in the planetary ecosystem is revealed. This is an early example of how Superhero stories can be more than just punching bad guys, as this story has more dimensions than string theory.

You should still be able to find the trade paperbacks

in print, but some of the hardcovers are hard to find at this point. Failing all else you can find the collections on ComiXology under Saga of the Swamp Thing. If you want to know more about the world of Watchmen, DC recently took the decision to tell more stories set before the events of Alan Moore’s story. They recruited a superstar team of creators and divied up the characters between them, with mixed results. Some found it hard to recapture the voice of the original series, whereas others took to it more natural. Dr. Manhattan is probably the best story the Before Watchmen initiative has to offer, as JMS seems to have a real grasp of what makes the character interesting, and a rare ability to make grand ideas feel grounded.

This four-issue mini series has also found new relevance recently, as DC Comics: Rebirth #1 seems to imply that the character may have had something to do with the creation of the New 52. If this intrigues you at all, check out our feature on DC’s Rebirth. You can find this story collected in a pair with Straczynski’s sister title Nite Owl either in Trade Paperback Watchmen was a story about Silver Age heroes dealing with Cold War paranoia, but Alan Moore took a particularly bleak and cynical approach to the topic. Seeing the same subject being handled so differently by Darwyn Cooke in The New Frontier is really quite fascinating, as he carefully poured out all the negativity and replaced it with pure liquid optimism. Even though the story features a large and diverse cast, it’s mostly made up of classic heroes who are known to even the most agnostic comic reader, so there are no issues with accessibility.

In the space of just 400 pages, Cooke takes his readers on a tour of the DC Universe, and shows them just what makes these heroes so special. He implements an unusual 3 panel layout per page, which allows the characters room to breathe and all gives everything a cinematic feel. Cooke is inspired by classic artists like Will Eisner, and everything he draws has a simple elegance and a 1950’s sheen to it. Sadly, due to his recent passing, books like this simply won’t exist anymore, as nobody else in the medium can emulate what this kind of work.

This story is available in a single Trade Paperback

, or an out of print Absolute Edition

. All of the printed copies may become harder to find, as often happens when a creator passes away, but they’re readily available through ComiXology if you can’t find a physical version for a reasonable price.

That brings us to the end of this instalment, and the section devoted to standalone mini-series. Next week we’ll be graduating to some longer-form stories, and discussing one of the best comic series ever scribbled onto paper. To keep track of all future recommendations make sure you bookmark the original post, which has an index at the bottom of the article.

LEGO Dimensions Is About To Get Even Bigger