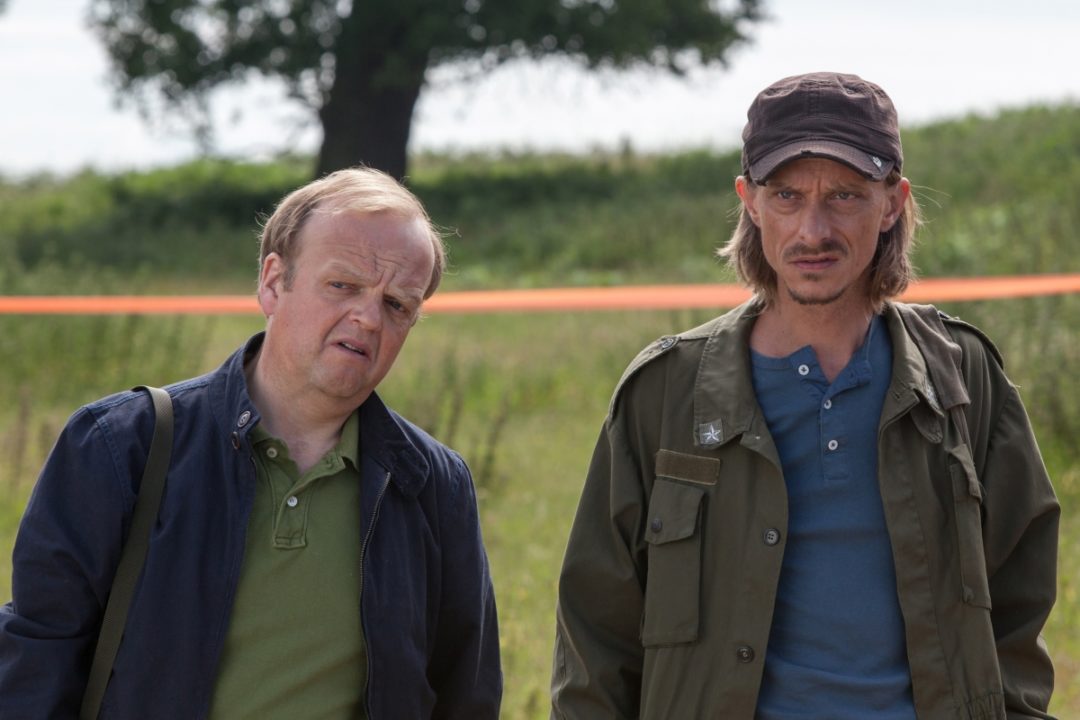 Detectorists is a two season BBC Four show written by, directed by and starring Mackenzie Crook. Also featuring Toby Jones, the show is a gentle drama-comedy set in the English countryside. Think Everybody’s Gone to the Rapture and you are on the right lines. The show is an enigma for me personally. I love science fiction, explosions, epic fight scenes and high drama. However, this show manages to tick precisely none of my normal favourites. After all, whoever thought that a show about metal detector hobbyists in the fictional Essex town of Danebury. However, something really hits home with the show. The quality of writing, the serenity of the show and the plot really make for compelling viewing.

What you got? - Detectorists: Episode 1 Preview - BBC Four

The writing is some of the best quality I have seen from the UK. Acknowledging the difference between telling and showing, Crook has managed to perfectly balance the script and the direction, continually communicating with the viewer with the minimum words possible. What results is a peaceful drama which is rich in story but light in exposition. A glance between characters is enough to tell you what they are feeling in most cases, where in other cases the previously established relationships combined with the accessible storylines allow the viewer to do the leg work. The characters are also well developed, with each one having a rich story and temperament. It is easy in story-driven shows to compensate by making the characters more like caricatures of what they were intended to be. Detectorists does not suffer from this, and instead, uses understatement as a weapon, allowing the viewer to see some very real people, doing real things. Relating characters to people you know is easy, making them feel closer to you. The comedy is very BBC Four, and anyone expecting 30 minutes of laugh track will be seriously disappointed. The show is real, displaying a mundane hobby, in a sleepy village with some quite outwardly dull characters. The DMDC (Danebury Metal Detecting Club) meetings provide some of the greatest laughs, where the group of detectorists meet to discuss their finds (normally ring pulls and toy cars) and plan the future. However, the height of comedy in this show comes in the interactions between Andy (Mackenzie Crook) and Lance (Toby Jones). The experience of these actors shines through as their sedate conversations about life and the minutiae of metal detecting hold some comedy gems. Some of them take a while to land, which only serves to make them hit harder. A sideways glance, an eye roll or a one word retort can really make a scene. The ability of the writing and the performance to turn some incredibly serious subjects into comedy always impresses me. A final important mention needs to go out to what is by far one of the most important factors in the show. The setting is absolutely key. This show wouldn’t work the same way if it was set in woodland or on a beach. The real world town of Framlingham in Suffolk plays host to Danebury and its surroundings. Danebury is colourful without being too garish, loud with the sounds of nature without being deafening and is genuinely peaceful – a perfect place to exercise your detecting hobby. Seeing the vistas open up at the start of an episode really brings you into the show from the outset, washing away stresses and relaxing you into a pleasant summer’s day. The sound of the environment is used to perfect effect, with the beautiful sounds of nature washing over the normal day to day life of the characters. However, when that noise turns to quiet, the silence is deafening, playing just as much of an important role. This is all compounded by a perfectly paced and ideally toned soundtrack.

Detectorists for me is the perfect guilty pleasure. BBC Four does not normally cater for my demographic, but something about this show hits the mark in each and every way. It makes for a perfect 30 minutes of immersion without being too serious. You feel part of their world, concerned with the details of permissions to detect and which type of detector is best. It romanticises detecting so well, I even considered spending out to buy a detector (which would no doubt sit in my shed). With season one available on Netflix now and season two available on the BBC Store, I fully recommend this show to everyone. Now, time to go and dig for gold…