Welcome to another entry in this series of comic book recommendations, which began a few weeks ago with A Beginner’s Guide to Comics. So far we’ve been through a bunch of standalone series, and in a couple of weeks we’ll be going deeper down the rabbit hole, but before that there are stills some fantastic stories to discuss in this medium-length category.

One of these stories is a collaboration between two of the best writers in modern comics. Greg Rucka has recently returned to DC for a new run on Wonder Woman, but this is the last thing Ed Brubaker did for the publisher, and it also might be the best. 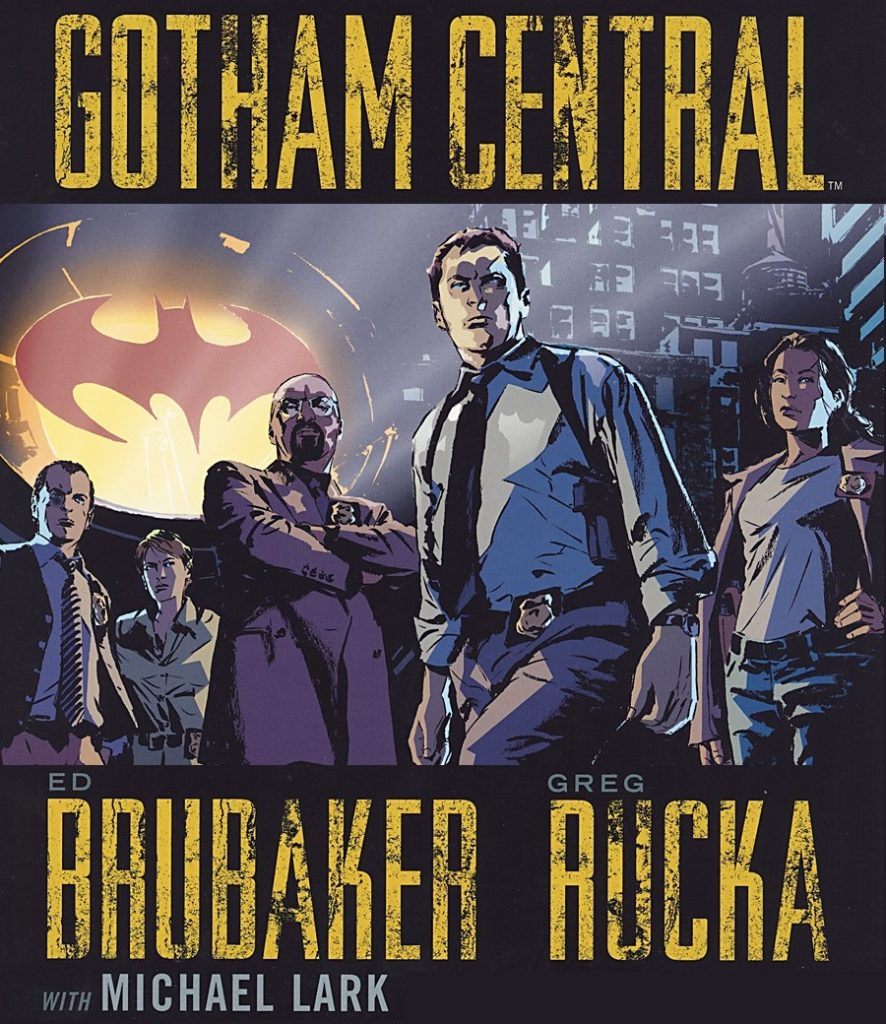 Gotham Central is a Batman story like no other, as the Caped Crusader is relegated to the background, and Gotham’s finest take centre-stage. The series follows two shifts of Detectives working in the Major Crime Unit that Commissioner Gordon established. They investigate the most serious offences in Gotham, and as a result, they occasionally cross paths with Batman and his extended family. The writing chores are cleverly split-up between the two shifts, with Rucka writing the stories involving the day shift, and Brubakler penning the endeavours of the night shift. The dynamics of each team feels very different, and the characters are remarkably fleshed out in a very short time. Some of the characters may be familiar to people well-versed in Gotham-lore, such as Renee Montoya and Crispus Allen, but most will be new faces.

Michael Lark provides the majority of the pencils, and his realistic figure work and attention to detail really sell the whole project. He roots these characters in reality, rendering a realistic Police precinct down to the most minor detail. This, along with the way people talk and conduct their investigations, makes this city feel more real than any other Bat-book. As a result, you grow to care about these people, and when danger comes you will fear for their safety, often with good reason…

One of the best Joker stories ever told exists within the pages of this nook, but when the issues were on the shelves, the audience just didn’t seem to respond to it, and the series was sadly cancelled after only five volumes. Since then more and more people have come to understand how special this book was, and DC have re-collected  it into an Omnibus

. If you’re a digital reader you’ll be able to find it all on ComiXology, but you’d be wiser to grab the Omnibus while you can still find it for a reasonable price. Choosing between the writers of Gotham Central for the follow-up recommendation is a difficult business; both are esteemed writers with a wealth of material to their names, but after thinking long and hard… Ed Brubaker has the edge. His run on Captain America is a force to be reckoned with, so it isn’t something you should go into lightly. It spans well over twenty volumes, including a couple of mini-series that count towards the overall story, but it’s well worth the investment as it’s the definitive run on the character of both Steve Rogers and Bucky Barnes.

In fact, the revival of James Buchanan Barnes is arguably the centrepiece of the entire story, as Steve spends a good portion of the run either (sort of) dead, or sidelined to a supporting role. Brubaker took a character who has managed to stay dead longer than almost anybody in a medium where it’s impossible to actually rest in peace, and after some subtle manipulation of continuity, transformed him from a childish sidekick into one of the most complex and interesting figures in comics.

Brubaker didn’t do all of this on his own though; he’s joined by frequent collaborator Steve Epting, old friend Michael Lark, and other superstars like Steve McNiven. This run is massive, but if you want a sampler, you should collect The Winter Soldier

, and Death of Captain America

first of all, as it’s the first act of the story, and the best material in the whole run. The best way to collect it now is the trades in the links, because the first three Omnibus’ are long out of print, but you may have to pay through the nose for Death of Cap. Luckily for the digital readers, it’s all available on ComiXology and Marvel Comics Unlimited. There wasn’t really a sequel to Gotham Central that carried on the concept, but a couple of the main characters (Renee Montoya and Crispus Allen in particular) moved into fairly prominent roles in the aftermath. The story mechanism for this was the weekly event Fifty-Two, which takes place in a year-long gap following the Infinite Crisis event, when Batman, Superman and Wonder Woman have abandoned their posts for various reasons. This creates a void that a number of smaller characters in the DC Universe have to step up to fill.

This is one of many experiments DC have conducted with weekly comics, and it’s also the first and only outright success that they’ve had in this field. Combining the talents of four of the biggest writers in their stable, with a rotating team of diligent artists, they managed to create something truly special. Greg Rucka handles Renee Montoya’s subplot throughout the event, where she deals with the fallout of Gotham Central, and finds her own place within the hero community.

, and if you keep your eye out you should be able to find the Omnibus

for a decent price, or you can just find it on ComiXology. If you’re looking for another grounded take on the criminal underworld, you can’t really do better than Criminal. This is another Ed Brubaker series, where he proves that he is the master of straight-up crime comics. There are plenty of comic-writers who dabble in the world of crime fiction, but it’s often with a supernatural or superhero twist. The series is made up of several individual arcs that jump around a timeline, focusing on two generations of Criminals in their fictional home of Center City. Each story is standalone, but the narratives occasionally weave together to create the feeling of a coherent world.

Sean Phillips is the perfect artist for this book, as he excels at making the more banal elements of comic books interesting. He doesn’t get to draw anything particularly extraordinary, but he makes talking heads and people drinking in bars look fantastic by infusing ever panel with detail and lacquering it with his Noir sensibilities.

The series currently stands at 6 volumes, but there have been some special issues recently, and there are rumours of more material on the way. The current books are being reprinted by Image, since the publishing rights moved over from icon, so you can pick up the new Trade Paperbacks

for a good price, but the same can’t be said for the old Deluxe Editions

. If you’re a digital reader, you’ll find everything on ComiXology as usual.

And that’s everything this week. Apologies for the lateness of this entry, but we recently launched the new Superhero podcast, Out of Heroes, which is taking more time to create than we anticipated. If you’re interested in listening to Alex, Scott and me talk about all things comics, you can find it on YouTube or iTunes. Make sure you check out the original post if you missed any of the previous recommendations, and check back in a week for your next instalment.

The Best Things about Star Trek Into Darkness