“Oh Good! Someone else to bang on about how great bloody Dark Souls is!” I hear you cry. That’s fair. There can’t be much left that Dark Souls hasn’t been praised for, and its combat alone has certainly garnered a fair amount of acclaim. But here I am, hoping to offer a slightly different take on it – how the series gives a particularly interesting portrayal of the martial art practiced by the Knights of old.

You see, aside from gleefully wasting hours of my life on videogames from a young age, I’ve also been a terrible history nerd for as long as I can remember. This fascination, particularly with the Middle Ages, has evolved over time from a purely  academic pursuit into an effort to gain a more practical, ‘hands on’ understanding of the past through some 7 years participating in medieval battlefield reconstructions and more recently becoming a student of HEMA – or Historical European Martial Arts – to help truly understand the techniques and principles involved in sword fighting. For balance, I’ll start with the disclaimer that, even aside from the more obvious fantasy elements (I’m going to conveniently ignore all that sorcery and pyromancy nonsense here) Dark Souls isn’t Medieval Combat Simulator 2016. Like most videogames, there’s a lot of elements of medieval European combat that it doesn’t really represent which, in fairness, it’s unlikely any truly can. It’s a solid bet that, if you’ve got a few games tucked away on your shelf or stashed on your hard drive from any time from the medium’s earliest days right up to recent weeks, one or two will have you traipsing about in some sort of armour harassing the local flora and fauna with something distinctly sword-shaped. While sword fighting is such a common pastime in videogames, experience of it as a real life pastime makes you acutely aware they may not always be perfect bedfellows.

So what do they get wrong? Translating everything that fencing with a longsword entails, for instance, to a limited number of pre-set interactions, all tied to the even more limited set of single button presses or simple combinations offered by your typical gamepad, must be a real headache. Before you’ve even considered what happens when steel actually hits steel, there’s the need to understand distance, body mechanics, and martial timing. Then, you’ve got the fact that a huge part of the art is in the need to feel for your opponents blade (because it’s very hard to actually see a thin piece of metal coming towards you at speed, especially when the person swinging it really, really wants to hit you with it), and the near infinite different outcomes that depend on how you and your opponent react to this, as well as where and with what force swords have met each other. When everything mentioned above is all happening in a matter of seconds, fractions of a second even, translating such an analogue process accurately into the digital realm’s got to be a total nightmare. 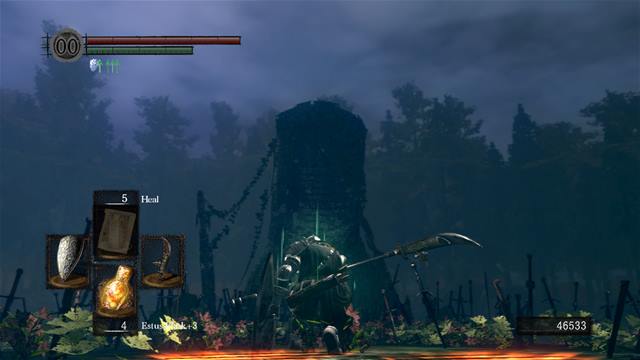 It’s no wonder then that many games, Souls included, essentially boil much of this down to a button for slow, powerful attacks and one for quicker, lighter blows.  If you’re lucky you’ll be able to slash and thrust. This is certainly a concession to accessibility and fun, too. Like many martial arts, the medieval European variety will take years of training to get anywhere close to mastery, a commitment few would want to make to a single videogame. However, having recently played through the original game and gradually progressing through its sequels, there’s a few aspects and principles of medieval combat that Dark Souls captures particularly well, whether by intent or happy accident.

For starters, it’s hard! Yes, not the most original observation to make about Dark Souls at this point, but hear me out. It requires keen concentration and control if you don’t want to end up dead. If you become complacent, even the lowliest opponent can get the better of you before you know what’s happened. In a similar vein, it’s often said that a total newbie can be the most dangerous opponent in fencing, purely because you never know what they’re going to do. They’re more than likely to take a blow from someone more experienced, but their lack of proper caution means they’ll take risks someone more experienced probably wouldn’t, so they may well surprise you. On the other side of the coin, Souls’ difficulty means that your slightest mistake can be quickly capitalised on.  Messed up the timing a bit on that parry? Rushed in with blind flurry of attacks? Back to the bonfire you go, no souls for you. Same in real life, but without the souls bit. Or the bonfire, usually.

This covers some similar ground, but it also quite powerfully conveys the concept of offering a threat to your opponent and reacting accordingly to the one they offer you. Sure, you could say the same about combat in a lot of games, but the particularly high toll for failure in Dark Souls and the difficulty its name is synonymous with breed a particular caution and acute sense of threat among its players that I feel few others manage. Real fighters will offer a threat to their opponent to try and force a reaction they can take advantage of, with the aim to control the flow of the fight. If your opponent is forever having to deal with the threats your offering them, it gives them far less opportunity to plan ahead and effectively strike back. Many more experience HEMA practitioners than I often refer to ‘fishing’ while sparring, not just because some movements mirror it as a physical activity, but because of the way they’ll try to constantly bait their opponent into action. Again, as in life, so in Lordran. While the method maybe changed by the nature of the game, this is often seen when approaching a new foe in Dark Souls, cautiously moving around them, getting in a little close just so you can get a reaction and test their capabilities before truly engaging them. Sometime baiting out that one attack then leaves them vulnerable just long enough to get a clean strike in…

On a less technical side, Souls also gives a decent representation of armour and mobility for a work of fantasy. Yeah, you can wear stone armour and magic masks too, but many of the sets you can wear are fairly grounded in medieval or renaissance reality. I could go on all day comparing various in-game armour sets to real life inspirations, but  one more unusual example is the horned helmet worn by secret Welshman, Domhall of Zena. This is very nearly a copy of the one gifted to Henry VIII by Holy Roman Emperor Maximillian I, which now serves as mascot for the Royal Armouries in Leeds. Far from the most physically fit person in the world, even I can move about pretty well in a full harness of 15th century plate armour, even without the added motivation and adrenaline rush that comes with the constant threat of violent death! The Knight of this time would have been through constant training from a very young age in and out of armour, so very mobile indeed. It’s a common misconception that armour was too heavy to move well in, that a Knight who’d fallen to the ground couldn’t get up again, and even more ridiculously, that they’d need a crane to winch them onto their horse. Darks Souls accurately subverts this, and rolls with it.  Pun very much intended. While you won’t find much call for dodge rolls in a duel with a real opponent – I can’t speak for its suitability against dragons, giant wolves or animate, bipedal  trees  – it’s certainly possible to perform in a decent, well-fitted set of plate armour. In Dark Souls less armour means you can move more quickly and more easily, but it also doesn’t make the mistake of thinking you can barely move at all while clad in tempered steel. It finds a happy medium that doesn’t always get portrayed in games with such subtlety. As for stone armour, fair play, that’d slow you right down. But that’s why stone armour never really took off back in the day, if anyone was mad enough to try it at all.

So, while Souls makes many of the same concessions as other games with its combat – a simplified range of movement, slower, heavily telegraphed strikes– it gets quite a lot of concepts right. Concepts that, if you’ve not gone all-in on ludicrous hobbies, or had the excellent trainers and teachers I’ve been lucky enough learn from, are easily overlooked! I’m very much a beginner in the world of medieval fencing, able to understand and explain some of the martial principles I’ve mentioned briefly here, but yet to be able to practice them with any real consistency. With Dark Souls too, I may have seen off the final boss, but there’s always more to learn. There’s still plenty of room to get good indeed.

This piece comes to us care of guest author, Duncan Parsons. If you like what you see, and would like to see more – let him know! You can find Duncan on Twitter @Duncan2501 or leave a message in the comments.