Walker Stalker Con is, as the name suggests, a convention for all things The Walking Dead, a fantastic event for fans of the franchise, across all forms of its media from the comics where it began to the hit TV show and even the computer games. The Olympia’s main hall is vast and accommodated many vendors selling a variety of cool things from replica weapons from all sorts of movies and games, to cool art, to figures, collectables and all sorts of cool wee nik naks –  it was quite an experience bumping into Greg Nicotero as he was doing a bit of shopping at horror themed vendor stall Darkside Goodies.

The main hall also boasted the main panel stage and some of the tables for the many celebrities in attendance, not all from The Walking Dead either, there were other actors from shows and films like American Horror Story and Bates Motel, as well as voice actors and other writers and artists. The gallery upstairs had a few more vendors and celebrity tables, including the heavy hitters Norman Reedus and Jeffery Dean Morgan. 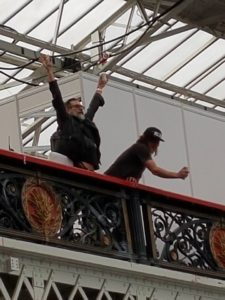 One of the celebrities I seen in the main hall included Michael Cudlitz (Abraham) who, in addition to doing autographs and pictures for fans, was also collecting food donations as part of his Bisquick Challenge to give to those in need. Abraham; balls of steel, heart of gold. Others I saw there were Josh McDermitt (Eugene), Christian Serratos (Rosita), Chandler Riggs (Carl/Coral), Greg Nicotero; the genius behind all the shows special effects, IronE Singleton (T-Dog) and some others not from The Walking Dead, such as Melissa Hutchison (voice actor for Clementine, Telltale TWD game), Nestor Carbonell (who I walked right past without clocking it was him until I seen him at his table signing autographs…oops!), Freddie Highmore (Bates Motel), Denis o’ Hare and Alexandra Breckenridge (American Horror Story).

I hadn’t been there long before Norman Reedus (Daryl) popped up at the gallery balcony in a cap and sunglasses looking like some kind of rock star, taking pictures of the crowd on his phone. Somewhere on Norman Reedus’s phone, there is a picture of me in it. No I wasn’t mancrushing hard…Honest!

The atmosphere of the place was absolutely electric, never before have I seen a place so alive with the undead. The energy from the crowd was nothing short of tantalising. Everyone, myself included, was just so excited to be shuffling around absorbing the attention and energy of some of our favorite stars.

Many people were cosplaying their favorite characters, I saw a myriad of Negans, Ricks, Carls, Daryls, Rositas, even the odd Governor and more. They were all excellent. Fans also dressed as walkers of course, from all walks of undeath, with their own versions of zombie brides, queens and the like.

Two individuals who stood out to me were a pair of walkers, a lady and gent respectively, the former ambled toward an unsuspecting me as I was making a twitter post. She was almost upon me as I looked up and promptly burst out laughing, before taking a quick snap of her. She was very nice for a flesh eating monster. The latter of the two nasties wore a shredded gray suit and made a habit of clinging very close to the back of totally oblivious fans whilst leaning his face in beside them and snapping at them, I watched as he did this to a lady and she ran off screaming, which gave me quite the chuckle. Both of these ghoulish creations were products of the very talented professional make up studio Silent Studio Productions who also had a booth on the floor offering patrons the chance to become beautifully rotting corpses of their own

The convention as a whole was well organised with plenty of volunteer stewards on hand. People with disabilities were given priority in queues and had ample seating spaces reserved for them with good viewing positions. Onstage, there was always a man or woman accompanying the panels with sign language. These are such simple things but they make a world of difference to the right people. The organisers are class acts and I fully congratulate them for making that extra effort. Even the toilets were in fantastic order and were nice and clean…And we all know how crap they usually are at conventions, s’cuse the pun. Among the many events going on there was a zombie maze which I couldn’t resist going to check out, it was a modest sized area that led you through events from the TV series including having to wear a blood soaked jacket to sneak past walkers and bypassing the Terminus before ultimately being captured by The Saviours and being confronted by Negan himself, whereupon he threatened to cut out my eye and feed it to my dad (sshh, don’t tell him!). What a ride it was, I’ve got to say the atmosphere and make-up/design was excellent. The walkers acting were great and their Negan was genuinely quite scary but in an amusing way, just like his TV counterpart, and even he bears a striking resemblance to Jeffery Dean Morgan as the aforementioned baddie. I thoroughly enjoyed it.

Other events on offer were photo ops with the celebrities Like Andrew Lincoln, musical interludes with Katelyn Nacon (Enid) playing the Ukulele and little video montages, one particular clip I enjoyed showed all the stars taking turns at smashing up pumpkins with Lucille, Negan’s barbed wire wrapped bat, the most hilarious of which being Josh McDermitt, who nodded confidently at the camera and made little to no impact on the pumpkin. 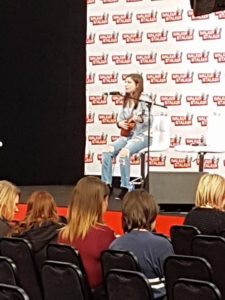 But the most interesting events by far, to me at least, were the panel discussions with all the celebrities. The panels were spread out over the two days and featured all the celebs in attendance at some point. All the panels were great and everyone was genuinely really funny, they took questions from the audience and regaled us with stories and anecdotes.

Highlights from the panels include;

The first panel with David Morrisey and Scott Wilson, while they were talking, Norman Reedus, who was later joined by Jeffery Dean Morgan, kept popping up randomly from the gallery above and spraying silly string over everyone, which caused screams of excitement from the crowd, which in turn made more people turn around to see what was going on and stealing all the focus from the panel absolutely no cares are given with that man. 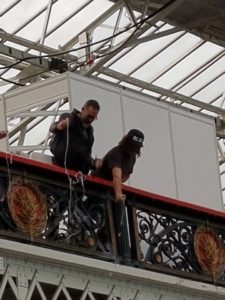 During the panel with Marquand, Gilliam & Traynor, they were presented with a chocolate skull and Seth immediately held it aloft and began reciting Hamlet before biting a massive chunk out of it, he was then goaded by Marquand into singing a rendition of a song by Robert Brown, which was rather good. 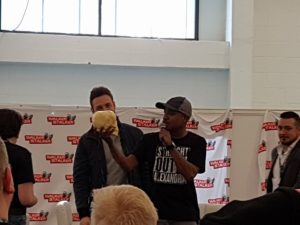 Greg Nicotero showed us a secret video from his phone but he was very adamant that no one record it as it would land him in trouble so I’m not even sure if I can describe it if I’m honest. 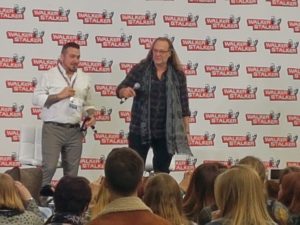 Greg Nicotero and his fabulous scarf

In Josh McDermitt’s panel, he came out rocking the air guitar and when none of the question mics were working initially, he just ran into the crowd and stood among all the fans allowing them to use his mic to ask the panel their questions. There was such great chemistry between McDermitt, Cudlitz, Serratos and Masterson, they were all incredibly hilarious. 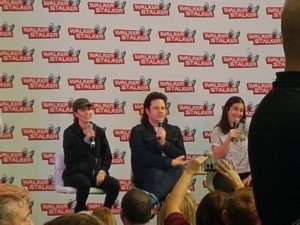 IRonE Singleton sat down with us and let us into some hard truths from his past and about life in general before being surprised with a birthday cake and we all got to sing happy birthday to him, he is such a lovely and humble guy. 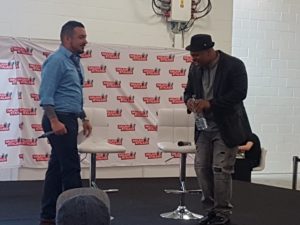 IronE Singleton getting his groove on

Khary Patton waltzed onto stage and addressed us as citizens of Olympia in his kingly voice, refused to be upstaged by a cute wee girl who asked him if there was going to be any romance between him and Carol (It was none of our business apparently) before inviting her up for a cuddle and posing for pictures with the girl. He also recited Ezekiel 25:17 (Jackson’s speech from Pulp Fiction) and even spoke in Simlish, the language from The Sims, as he played Death in The Sims 3. Unfortunately, because of the time of my flight home, I had to leave early on Sunday and as a result missed the Hilltop, Saviours and American Horror Story panels which is a shame as I’m sure they were all great as well and I suspect Jeffrey Dean Morgan in particular would have been hilarious.

To wrap up, I thoroughly enjoyed my time at Walker Stalker Con, I am already very eager to go back again and would highly recommend it to anyone. It is a top quality event and all the guests in attendance were very fun to be around. The organisers should be very proud of themselves and I hope WSC runs for many years yet.

Big gaming nerd & follower in the way of the beard. I enjoy writing about my latest gaming antics and reviews/previews of them. Still waiting on my 80's vision of the future...I want my flying car!
5 Comments on this post.