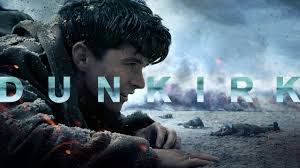 Dunkirk is directed by Christopher Nolan and stars Tom Hardy, Cillian Murphy, Kenneth Branagh amongst a humungous cast of people and the story of the evacuation of four hundred thousand men from Dunkirk in the middle of World War Two.

Who at every second are in danger of being eliminated by the Germans and it’s about how these men got off those shores, the civilians that got in their own personal boats to travel there to help them and the stories of these men trying to do everything they possibly can to survive.

Of course, I was excited for this movie because it’s directed by Christopher Nolan and obviously you’re thinking to yourself at the very least this is going to be a magnificent spectacle and the Dunkirk production uses real boats and planes, as well as real locations, an incredible number of extras to immerse you in this moment, to make you feel utility and completely taken over by it and it works, this movie is a complete thrill ride from the beginning to the end.

From the opening shot of Dunkirk, you are in it, we’re introduced to a few characters very quickly and then you are instantaneously in this battle and it never lets up, there’s never dull moment.

The one issue in the movie which doesn’t detract from it is I didn’t feel a connection with anyone character that I could root for or I could connect with emotionally.

This movie is about the event, it’s about this evacuation of all of these men, it’s about being in the middle of a horrific situation and the way Nolan helms all of these battle sequences, it’s pure cinema at its best.

Everything you see on the screen looks completely authentic, there’s never a moment that feels wasted, there’s not a scene that feels misplaced and even though it is very simplistic with its character’s its story telling isn’t.

The film is about an hour and 45 minutes long which is short for a Nolan film, and after watching the film it’s spot on for me, because the film is one gigantic sequence told in a very interesting way, because if it gone on any longer I think it would have outstayed it’s welcome any shorter there wouldn’t of been enough impact.

The impact of this movie emotionally doesn’t come from hoping the character’s make it out of this situation, it comes from seeing this spectacle, some will not like that, it is about the spectacle, the aerial dogfight sequences with Tom Hardy, are so riveting and you are at the edge of your seat the entire time, because they look authentic, the planes don’t blow up in theatrical ways, the gunfire does not look like movie gunfire, everything about this movie feels incredibly real, that despite the fact the character’s aren’t really given much set up and this movie is completely about this one moment I was riveted from scene one.

Hans Zimmer once again gives you a score that is just as riveting as film is, I can’t wait to get my hands on this soundtrack.

If you go into Dunkirk expecting a straightforward narrative with characters with emotional arcs and big moments where they explode with incredible dialog, you’re not going to get that, this movie like I said is very simplistic but it’s also highly realistic.