A constant search for cats

Yonder: The Cloud Catcher Chronicles is all about discovery. It’s at the heart of everything you do in this beautiful open world adventure. Yonder feels familiar. It takes a few standard game mechanics and allows you to partake in them as much as you want, to an extent. The short main story quest and the lacking sense of achievement however, hold it back and it’s repetitive nature can push you away. 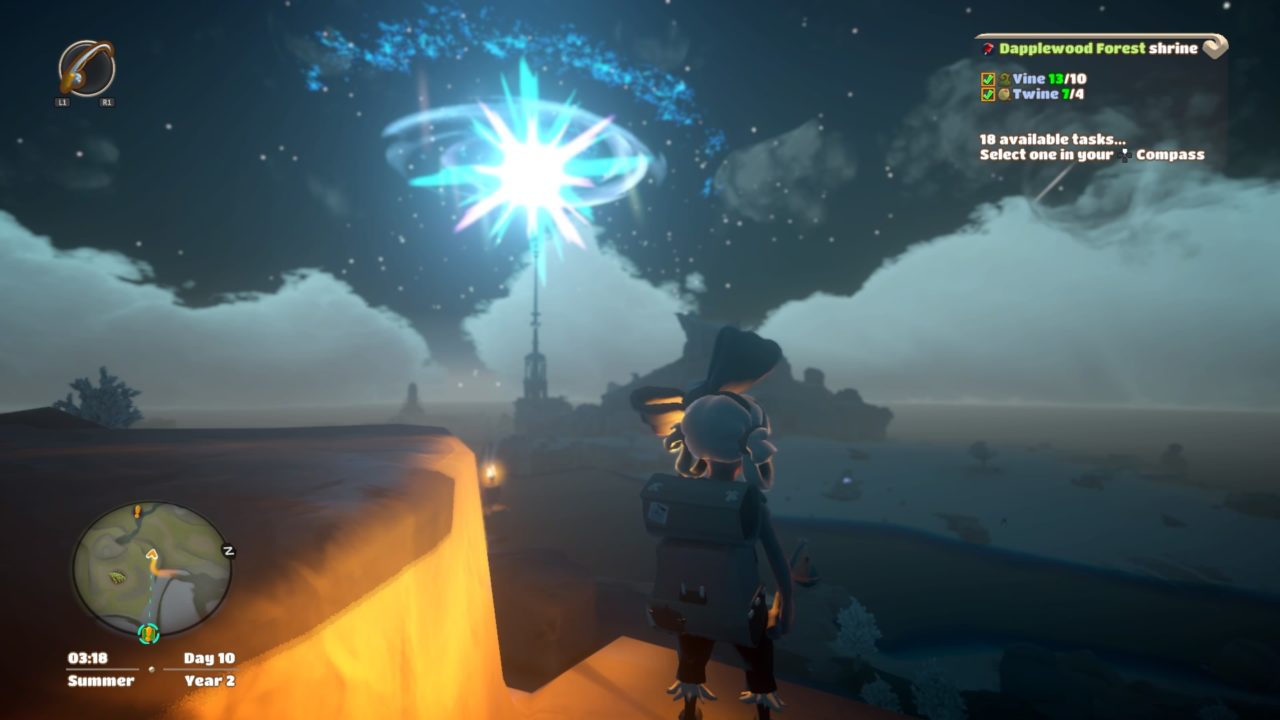 Explore to get the best views

Yonder, developed and published by Prideful Sloth, is a jack of some trades, master of none. Exploration, crafting, resource management and trade are the four pillars of play in the world of Gemea. Exploration takes the main focus as you traverse the world searching for quests, resources, animals and sprites. The other pillars; crafting, resource management and trade, help to push the narrative and prop up the exploration. As such they can be delved into as much or as little as you like. Each do have to be used to complete the various quests scattered throughout the world but there is a choice. Quests can be approached and completed in several ways using these different types of play. If a character requests an item you could either trade for it from one of the many villages or collect resources and craft it. OK, these options aren’t endless and sometimes one is more convenient than the other, trade often being a quicker route, but by giving you the option you never feel rushed or feel that you have to grind to completion.

To it’s benefit there is no combat. It’s been eschewed for a more peaceful, calm and pleasant exploratory experience. Even the moments that, in other games, could be tense the games elements combine to give a well realised, relaxing atmosphere. Calming music, a resource rich landscape and the ever changing day night cycle and weather patterns really build this relaxing experience. Even in a storm there is something peaceful about breaking rocks with a simple melody playing in the background and a bolt of lighting striking the horizon. With no enemy in sight everything can be done at your pace.

Visually, the world is beautiful and is reminiscent of Wind Waker or Dragon Quest. Whilst not a graphical powerhouse the art style is endearing. The cartoon aesthetic portrays an inviting world with inhabitants you want to speak with, animals you want to befriend and landscapes to admire. I found myself looking out over a vista, taking a moment, and then continuing on or stopping to watch the fog and rain move in. The world is made up of distinctive and diverse biomes from lush forests to snowy mountains all with their own unique animals and plants. There is a great amount of detail in these differing zones and I often stopped to watch a miniature penguin or caterpillar go about it’s business, a break from the constant exploring. There’s no falling damage when you’ve an umbrella

As stated the main story quest is short, so short the trophy for completing it is titled ‘That was easy’. Essentially you have to collect sprites who help you clear the Murk. This is a purplish haze which blocks off certain paths or areas and is hazardous to humans, although you cannot be hurt by it. Collecting sprites and clearing Murk then leads you to an island where all of the games secrets are revealed. A few fetch quests later and you’re finished. It’s simple, very quick and then allows you to experience the rest of the game unhindered by a need to do something. The only problem is that I wanted more. Without an overarching sense of direction or a goal I feel like I’m completing quests and building farms for the sake of it. Yes it’s a relaxing experience to unwind with after a busy day, but not having a larger goal nags at me. I need that sense of achievement even if a completed task is a small step towards that goal.

Whilst at a glance it may seem shallow, there is a layer of depth to be discovered in the systems at work. The unique fast travel system, unlocked through discovery, still requires you to venture out by yourself and doesn’t plant you at the most convenient destinations. It forces you to explore. The trade system makes each village unique. Certain goods will change in price based on a number of factors and you can game the market by trading between towns. You can also influence this market by selling the goods collected through farming. Farming itself feels like a mini game as you have to coax animals to become your livestock and harvest the goods they create. If you chose to you can hire farm hands once the farm is set up so you don’t have to manage them and can just reap the rewards. There are also a lot of cats to discover and collect, some of which only appear at certain times of day or season and the animals you can befriend have varying migratory patterns. Looking deeper there is a lot going on and a lot to get stuck into if its initial shallowness holds you long enough.

Or you could just fish. This is probably the most relaxing yet taxing activity you can do in Yonder. Giving the livestock a little love

I don’t think Yonder is aimed at me. As someone who enjoys action heavy RPGs this felt too light on the ground. It’s lack of direction and any meaningful goal stopped me from completing all the quests and acquiring all the collectables. It just didn’t hold me past a few calm play sessions and I played longer than I would of done had I not been reviewing it.

That said, I think Yonder fits well into the RPG space. For those who are new to the genre, new to open world games or want something they can easily pick up and play, this is a quick, calm and easy entry point. For those who want a relaxing, pleasant, non combative experience the exploration will occupy a lot of your time. It’s also a perfect way to begin to understand more complex systems an how various actions can affect a world. It almost seems rude to suggest that this is a game for younger gamers but I think it’s a perfect example of an entry level open world game for any age or skill level.

As I’ve stated in other reviews I don’t like giving a score, so I won’t. I will recommend it to those looking for a calm, relaxing experience that has a little depth and doesn’t force or push you to do too much. Or those looking to get into RPGs and don’t know where to start.

The version reviewed was on the PS4.

Game of Thrones: Characters Who Should Return as Wights in Season 7