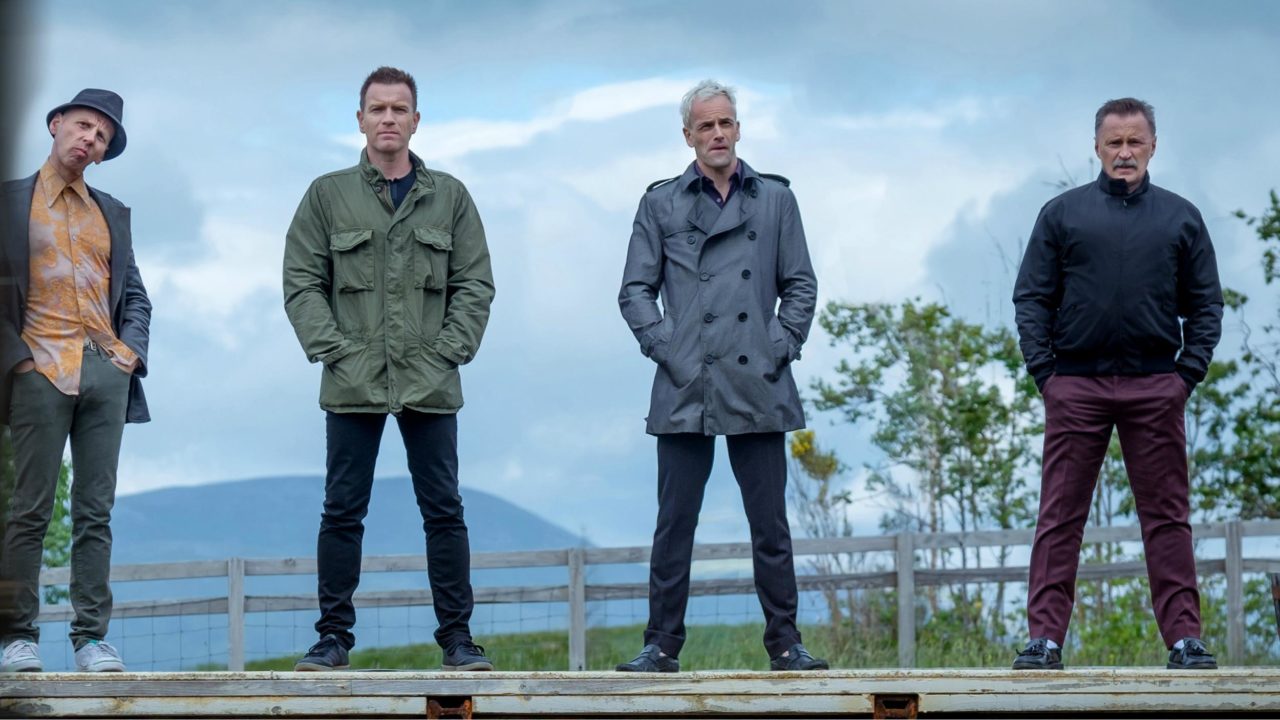 Why Trainspotting 2 is the Best Film of 2017

We seem to be living in the age of the delayed sequel. The age of manufactured nostalgia. The age of trying to get as much cash as possible out of old viable franchises before they die completely. Many of these projects have been failures; some financially, most creatively. However, 2017 saw the two best delayed sequels so far, one on television and one film, both managing to be the best property in their respective medium of that year. On television it was the return of Twin Peaks and on film it was Trainspotting 2. Both of them succeed for the same reasons. They balance the old with the new, perfecting call backs and originality and are overall slower, more deliberate and understand that the properties have aged, much like their characters. Trainspotting 2 (also known by the ridiculous title of T2: Trainspotting) might not always match the speed and frantic energy of the first film but it’s not trying to. Instead the film has something more, something better than the original.

“You’re a tourist in your own youth”.

No one line of dialogue sums up Trainspotting 2 better. I’ve seen people complain about Trainspotting 2 saying it is overly-referential to the first film but that is the whole point. The film is about discovering who you really are by rediscovering who you were. Mark Renton left his old life behind, left his old country behind, in the hope of escaping into the embrace of self-actualisation only 20 years later to discover the things he left behind are a part of him. Parts that are just as important as his failing heart and faded needle scars. Trainspotting 2 is a film that feels incredibly British, specifically Scottish, but is thematically profoundly universal.

The opening of the film is the perfect example, the perfect epitome, of the themes of the whole film. In a visual synecdoche we see Mark running just like the opening of the first film. In that he was sprinting for his freedom from the police, dropping shoplifted goods as he does so. Here he hops on a treadmill, running nowhere with a blank wall in front of him. Mark collapses and falls, being flung backwards into a mirrored wall with an epiphany on how to regain his ‘lust for life’. He will return to Scotland, seek out his old friends who could very much be his enemies in an attempt to grab on to his old life, his true life. To become who he once was but a more aged and experienced version while also accepting his old flaws because they are as much are part of him, if not more, as his successes.

Mark returns to a new Scotland. A Scotland of Starbucks, Vajazzles and gentrification. He greets his aged father (the always amazing James Cosmo), mourns his dead mother and cannot bear to listen to his old records. The experience is overwhelming and he’s not yet ready. The film is about him becoming ready, rediscovering himself through the experiences he has with his old friends until in the final scene he can listen to the music and once again find his true ‘lust for life’. The conflict within Mark about finding his place is framed perfectly half way through the film with Mark’s “Choose Life” speech. This could very easily have been a call-back to the original for the sake of fan service but instead the meaning is skewed. The speech is updated to attack social media and other aspects of modern culture but this time it feels much more like a rant and an outpouring of previously contained anger. The speech is filled with regret too, seemingly an attack on himself as much as the world.

The film bookends with mirrors in an interesting way. First Mark collapses against a mirror in the first scene and he realises he must return home to obtain happiness, dispose of his guilt and face the consequences that have been playing on his mind for twenty years. Then near the film’s end Mark is trapped in a room where every wall is mirrored creating reflections of an infinite number of Marks as he hides from Begbie, the personification of his past negative actions. These reflections of Mark’s true self are trapped all doing the same thing until finally Mark breaks free, a wall collapsing allowing him to escape and his best friend Simon to come to his rescue after an entire film of ambiguity surrounding what his final intentions would be. Mark has finally rediscovered his place in the world, surrounded by his friends after battling the consequences of his past actions.

The themes of ageing and finding your place explored with Mark are perfectly paralleled with Francis Begbie throughout the film. While Mark has changed considerably in the 20 years between films, Begbie has changed little but finds the world has changed dramatically and that he has been left behind when he escapes from prison early on in the film. Begbie is the same character he was when we last saw him, complete with more hints at his closeted homosexuality, and he’s stupefied at the changes in outside world. This is played for laughs in the club scene when he reacts to the people dancing. On a side note, while I don’t want Trainspotting 3 I would be down for a Begbie spin-off maybe with the working title of “Begbie and the Mystery of the Millennials”. Begbie being out of time strikes an emotional chord with the scenes with his son. Francis wants his son to take up the criminal profession while his son wants to study “Hotel Management” and after heated argument and an almost physical altercation, Begbie finally decides to let his son choose his own path after remembering an interaction with his own father. While his thirst for revenge is far from quenched you get the sense Begbie has come to peace with this changed world by the film’s end and that the microcosm of prison is now his true home, whether he is happy about that or not.

It’s not just thematically where Trainspotting 2 excels however. Danny Boyle’s direction has become more refined since the first film and his experience shows. Certain stylistic choices remain such as the freeze-frames but they feel fresh and the quirky visual metaphors, primarily Spud’s attempted suicide, are incredible and much better than anything in the first film, even the toilet scene. Boyle also manages to capture the beauty of Scotland in unique ways with incredible shots of the surrounding countryside landscapes but also within the city of Edinburgh, whether in the historical old town or the shots of dilapidated estates and tower blocks.

The musicality of Trainspotting 2 is unrivaled with a soundtrack which echoes the original but feels new. The Prodigy remix of Iggy Pop’s ‘Lust for Life’ plays over the end credits and it’s a perfect way to end the film with Mark once again starting to dance as the camera pulls back and the elongated bedroom, original wallpaper still present, takes on the form of a train. We get a subdued piano version of ‘Perfect Day’ with the opening credits and some classic John Barry Bond music but the film perfectly splices in new music too with ‘Shotgun Mouthwash’ by High Contrast and ‘Silk’ by Wolf Alice making it the best soundtrack of 2017.

Trainspotting 2 also perfects the balance between humour and serious emotional moments. The concluding character montage, the revelation of the title ‘Trainspotting’ and Mark’s near-death are all treated with the appropriate gravity but like life humour is never far behind. Spud gets some big dramatic moments, particularly his attempted suicide, but he also brings some great humour to the film with Ewen Bremner’s elastic face being used to great effect in sequences such as the ‘Raging Spud’ scene. The humour also tells us about the characters; through Spud’s funny British Summer Time story we are being shown that this is the same Spud as the first film and he hasn’t changed. Other scenes are both serious and comedic at the same time with a spot-on tonal balance particularly Begbie and Mark meeting for the first time in the toilets and then the following chase which may be my favourite part of the film.

Trainspotting 2 garnered favourable reviews on release but since I feel it has been forgotten, particularly now around awards season. I think it’s something truly special, a sequel better than the original, and I hope I have convinced you why it is my favourite film of 2017. You can read my full top ten films of 2017 list right here. Have you seen Trainspotting 2? Do you agree with my thoughts on the film? What was your favourite film of last year? Let me know in the comments and geek out with me about TV, movies and videogames on Twitter @kylebrrtt.

The Shape of Water – Movie Review