Pinstripe doesn't reinvent the wheel... but what it does do, it does it well
by Lee Chesnalavage 05/03/2018

Pinstripe is a dark and moody 2D adventure by Thomas Brush who wrote, designed, composed and programmed the entire thing all by himself, with some help from Kickstarter too. In Pinstripe you play as a minister called Teddy who’s three-year-old daughter, Bo, is kidnapped by Mr Pinstripe. Mr Pinstripe is a sinister intoxicated skeleton of a man who reeks of smoke – and all he wants is to make Bo his own daughter. Before you know it, the train they’re on crashes. Teddy wakes up among the rubble in Edge Wood but there’s no Mr Pinstripe in sight – and Bo’s gone too! Picking yourself up and dusting yourself off, you go in search for your daughter. Within the first 5 minutes we have a devout Christian who has his only child kidnapped by a creep who relishes in his slavery to his vices, and a cold, desolate world that’s seemingly only inhabited by crows. There are numerous characters who require your help of course, and they’re all unique and a joy to speak to – but one common theme is how everyone wants to drown their sorrows in booze. It’s all pretty bleak, isn’t it?

As this is an adventure game expect light platforming, minimal combat and a variation of puzzles to solve. Pinstripe doesn’t reinvent the wheel and it doesn’t lean heavy into a particular game mechanic but what it does do, it does it well. Gameplay is simple enough: you quickly find Bo’s slingshot and you’ll be using it a lot for things that are out of your reach, and if your slingshot can’t hit it then you’ll be able to jump up to it and interact with it directly instead. There isn’t a large range of enemies but having memorable combat encounters isn’t the aim of Pinstripe so it’s not a problem. The game is so laid back and a pleasure to play that fighting hordes of monsters wouldn’t be desirable. All you want is Pinstripe dead and your daughter back. 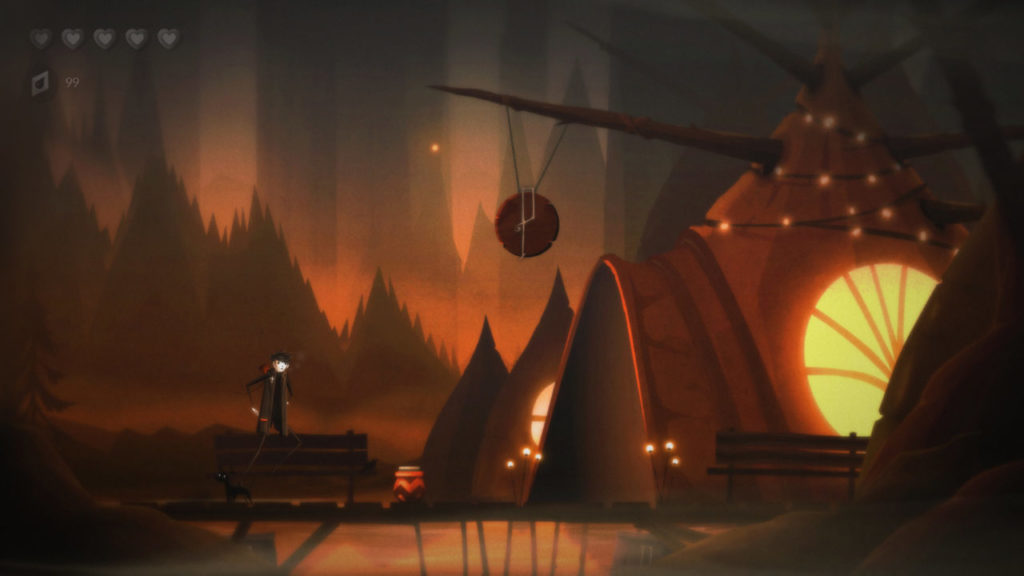 Teddy also has a pet dog that joins you on your mission to find Bo. His name is Georgie and, surprisingly, he talks. The way you interact with him dictates what ending you get; treating him nicely will get you a different ending than treating him like a jerk will. This small non-pivotal moral system was a nice inclusion that gives Pinstripe replayability. I had to play it a second time just to see what the differences were – it was a small change that was aesthetic more than narrative.

The art style is something to be admired and I consider this its best trait. It’s simple and child-like but there’s an eeriness to it. The human characters are pale, and red and black are dominant colours. It reminded me of Tim Burton’s palette, where everything feels washed out but full of life at the same time. The world and characters are melancholy but the dialogue performances are crisp and full of personality. There’s real emotion behind everything they say. There was a moment of clarity where I realised Pinstripe was special when, towards the end of the game, I had an encounter with a drunk character who said something that caught my ear. At the time it was nonsensical gibberish – it was just another example of the delightful sense of humour Pinstripe has – but something about it lingered with me. It was only when I completed the game that what the drunkard said fell into place, and in hindsight the insult wasn’t nonsensical gibberish at all but was actually juicy, thought-provoking writing instead. It was a hint of things to come, and the more I thought about it the more I remembered how cleverly these ‘hints’ were dotted throughout my brief time spent with Teddy and Georgie.

I only encountered a few technical issues with Pinstripe but they’re so minor I would hate for them to tarnish it’s melancholy gleam. They didn’t ruin my experience, that’s for sure, and so they won’t ruin yours either. I played Pinstripe on PlayStation 4 and during one loading screen the keyboard controls for PC sprung up for a second. If I had blinked at the time I would have missed it, it was so brief. And the only other complaint is that there was a collision issue with Georgie. Most of the time you can freely pass through him but on a few occasions I found myself running on the spot with Georgie clinging at Teddy’s feet. It was awkward and broke my flow but it was nothing a quick jump couldn’t fix. This didn’t bother me that much, but Pinstripe is a really short game. My first playthrough took me three hours and my second was just over an hour long. In fact, there’s actually a trophy for completing it in less than an hour. Because it’s so short there’s no reason not to replay it. There are items to unlock and new areas to explore so there’s no excuse not to take advantage of the Game+ mode.

If there’s one piece of feedback I could give Thomas Brush it’s that he shouldn’t be afraid to make his games more ambiguous. Pinstripe does an amazing job of drip-feeding the story to you. Whether it’s through clues from Teddy’s lost possessions or through dialogue with the creepy characters, the pacing of the plot is perfect. The game is full of symbolism and visual metaphors that become clearer the longer you spend with it and I feel like the finale would have had much more impact if we didn’t know Teddy was in Hell from the start. I think it would have been more rewarding for the player to figure it out for themselves or to come to their own conclusion. This open-ended approach is something I want Thomas to embrace without the fear that people won’t ‘get it’ – he’s already proven he can tell a deep, fulfilling story.

Why? It’s a relaxing game that’s only as difficult as your ability to solve its puzzles. It has a bitter-sweet ending that will tug at your heartstrings, and it’ll make you want to play it all over again. There’s also a Game+ mode so a second playthrough is a must!

But… It’s an extremely short game that can be powered through in an hour or two so the £11.59 price tag (of time of writing) will certainly put people off.

Blitz: The League – Does It Hold Up?