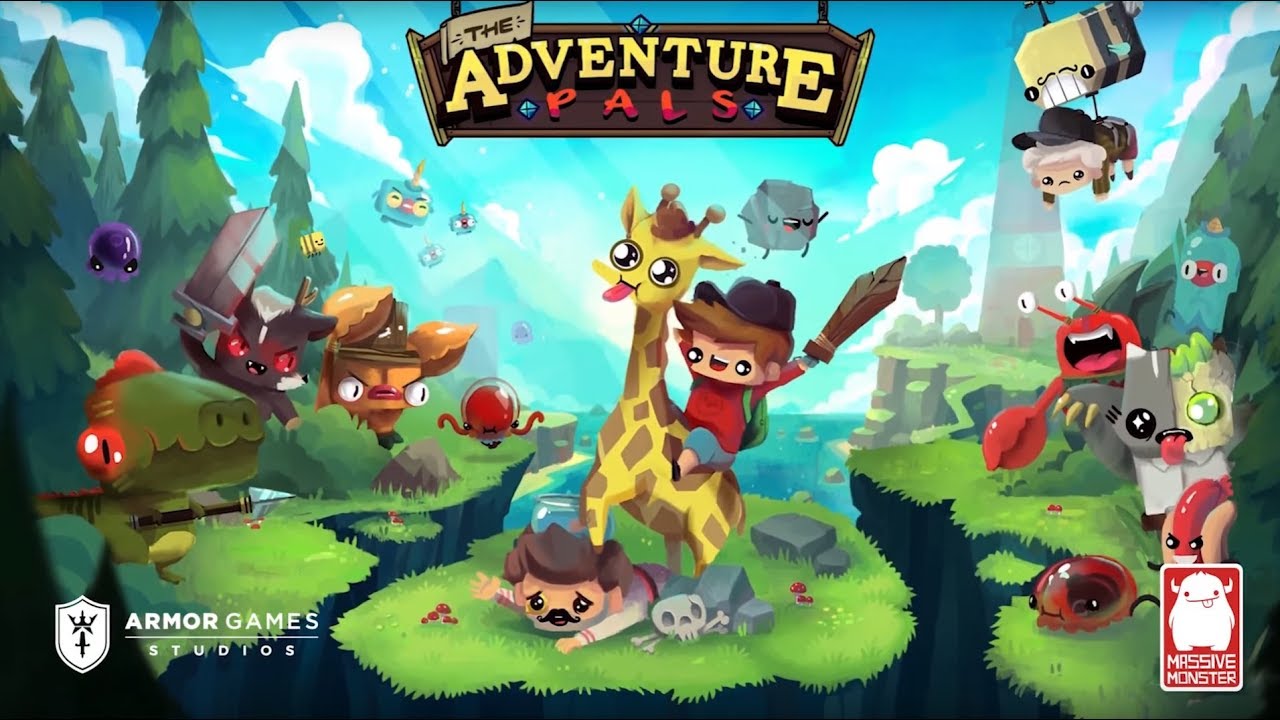 The Adventure Pals is a quirky action-packed sidescrolling platformer about a wrongdoer kidnapping the elderly and turning them into hotdogs, and if you think that’s super weird we’ve only just scraped the surface. The Adventure Pals puts you in the shoes of a young kid celebrating his birthday who, with his best pal Sparkles the giraffe, goes on a quest to save his dad from Mr. B – an evil monocle-wearing maniac on a flying robotic bumblebee who is kidnapping old people for… Reasons.

What’s immediately noticeable about The Adventure Pals is its art style. It feels like it’s been inspired by Adventure Time, The Powerpuff Girls and Spongebob Squarepants. Everything is sickeningly cute, from the anthropomorphic characters to the personified inanimate objects. Everything has a face – it’s like walking into Paperchase – and because of that the whole world feels more intimate. The Adventure Pals is beaming with personality and it’s never tucked away. It’s amazing how the artists have squeezed so much emotion out of the visual direction they’ve chosen. The game likes to pick fun at itself and at videogames as a whole with clever dialogue, and it’s not shy of breaking the fourth wall to satirise it’s game-logical plot points.

Gameplay is simple and addictive. You have a wooden sword and there’s only 2 attacks you can do: wildly swing your sword and toss bombs, so there’s nothing complicated to master. Sparkles acts as a vehicle of sorts. She can use her tongue to ‘helicopter’ across platforms, slingshot you to higher places, and is typically needed to open doors. You team up with Mr. Rock early on and he becomes your second sidekick. He acts as a defensive buffer between you and your enemies. There’s a limited upgrade system which allows you to unlock new abilities that will make collecting gold and XP easier, and you can upgrade Mr. Rock to perform more deadly assaults. Levelling up is easy and doesn’t require any grinding. I comfortably reached the level cap before the end without any difficulty. Fighting felt powerful and rewarding at first. Early on, the game does a lot to set up chain reactions that make you feel like a champ. Enemies are fairly weak to start with, so slashing them dead is no bother. It’s only later on, when enemies are more numerous and stronger, that you realise how lacking the combat is. There’s no finesse to it. You literally just have to stand where you are, mashing away at the attack button and hoping you have enough health potions to see it through. The counter-attack and dodging are lacklustre and are devices you will soon opt to ignore because usually dodging one enemy will send you into the range of another. Encounters become so busy that it becomes ugly to look at, undermining how beautiful it all once seemed.

There’s approximately 25 levels per location, split across 5 stages. Each stage has a ruby at the end of it, which is the ultimate goal of the game – collect enough rubies to pay Mr. B in order to save your pap – and there are collectible cupcakes and stickers for completionists to find. Feed cupcakes to an obese cat who will reward you with outfits. I spent most of my time with Mr. Rock dressed as a pizza slice, a Lego brick or as a little knight in shining armor! Stickers don’t unlock anything but they’re fun to look at. Some of them are nods to other games like Pinstripe and 10 Second Ninja X. I started to feel agitated and bored by the time I had finished the first 25 levels. Besides a few new character models (and a few variations of old ones) The Adventure Pals introduced nothing new, and yet I found it so addictive that I’d always come back to it. Even now I can’t pinpoint what kept me coming back. Maybe I was always holding out, waiting for something to change, but it never did and it left me feeling disappointed by the time I had completed it. And if saying it’s boring and addictive sounds hypocritical you’re going to find this even harder to digest – the music is lovely but tiresome. It’s the same tune on a constant loop. There’s definitely more than one song but I wouldn’t be able to tell you what they sound like as there’s one in particularly that has overridden all the others. It’s not that it’s a bad theme tune. I can feel it pounding away at the back of my brain as I type this; I can feel it tingling on the tip of my tongue. It’s just that I’ve heard it for so long that it’s irritating, and I wish The Adventure Pals‘ soundtrack was more diverse and memorable as Legend of Zelda.

Personally, I found The Adventure Pals far too long for what it actually was. I must have spent roughly than 10 – 15 hours on it and usually I’d say that’s pretty damn good for £11.99 but The Adventure Pals became stale after the first 5 stages. The changes per location weren’t radical enough to keep things feeling fresh and eventually I was left staring at a balloon that was so inflated it was about to burst. Which it almost did. About 70% into the game I started to experience bugs. There were at least 2 occasions where I had to stop the game completely and boot it back up. I won’t go into the gory details but The Adventure Pals does that thing games love to do where it locks you in a room full of enemies and will only let you back out once all the enemies are dead, except this game couldn’t always detect if the enemies had perished. The only way to escape was to reboot and do it all over again. If this had happened earlier on, say 25% into the game, I probably would have refused to carry on and written it off as a broken game. It’s also not without its framerate issues. The Adventure Pals can be extremely chaotic on-screen and the performance would take a nose-dive if too much was happening at once. This was especially obvious in the fighting arenas.

To look at it, The Adventure Pals is appealing. It’s derpy characters and random we-don’t-give-a-shit-about-realism will draw you in for a closer look. The little details that have gone into it deserve congratulating, and the music (that one song at least) will become a real ear-worm. Once you look past all its charm though it’s a repetitive hack’n’slash that won’t quench everybody’s thirst for adventure.

Why? It’s a simple and addictive button-masher with couch co-op which makes it the perfect game to waste a weekend with.

But… After a few hours it’ll start to feel like work. Once the fatigue sets in there’s nothing The Adventure Pals does to lift you out of the slump it’s put you in.