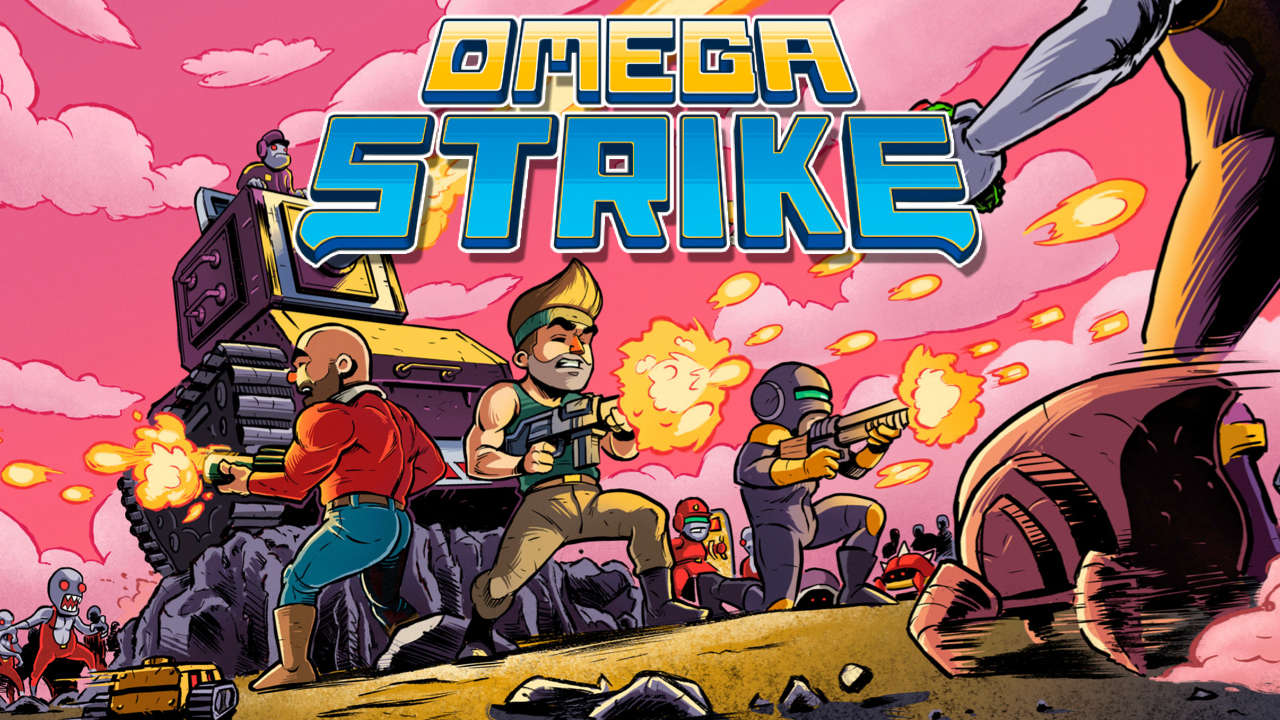 Dr. Alphonse Omega is one bad-ass son-of-a-bitch! After creating the Alpha Elixer, which is basically the Super Soldier serum Captain America is jacked up on, he successfully transforms the country’s army into an impenetrable force. However – PLOT TWIST! – Alpha Elixer mutates all of the soldiers into mutants. Dr. Omega and his mutant army take over the world but a small band of rebel warriors don’t take kindly to this kind of bull caca. Three men with guns and particular sets of skills leave the safety of their underground bunker to kill Dr. Omega: This is operation OMEGA STRIKE!

Omega Strike is a modern take on the classic action arcade genre and it hits every nail on the head, and then some. On the surface it could easily be mistaken for an 80’s classic but once you start playing you’ll notice the 21st Century horsepower under the hood: Enemies will explode into piles of gore; multiple enemies can be present without any screen tear or drop in framerate; every location has a multi-layered parallax backdrop that never stops moving. However, the real icing on the cake is its key game mechanic – switching between our three heroes on the fly. In Omega Strike you can switch between three characters: Sarge – he’s basically Rambo; Bear – heavy gunner and explosives expert; and Dex – ninja with a shotgun. Mastering each one is a necessity as they each have unique weapons and skills that you will need to use to fight your way to Dr. Omega’s flying castle in the sky. Unlike other games that have you switching between a small party of characters, you’re not left escorting unused stragglers through a maze of riddles. By using a teleporter you’re actually teleporting the soldiers in-and-out of the battlefield so you’re only responsible for one man at any given moment. This adds a brilliant level of puzzle-solving where you will find yourself double-jumping with Dex then switching to Sarge in mid-air so that you can grab a metal railing. Omega Strike is also a Metroidvania, so I found myself backtracking ALOT. Every time I unlocked a new ability I would replay an entire location in the hopes of discovering hidden loot and new areas. There’s only so many times you can replay a level though before the boredom sets in, and unfortunately Omega Strike isn’t the best example of a Metroidvania. The game encourages you to retread old ground but it doesn’t do enough to make you remember where new areas are hiding, so you will rarely ever unlock a new ability and instantly know where to go. Guacamelee and Axiom Verge did it better. 6 hours in and I was working my way through the penultimate level when the game crashed. I lost 30 – 45 minutes of progress. What made it more bitterly disappointing was that you can’t save whenever you like from the pause menu so I had to grit my teeth and do it all over again. Luckily it was the only crash I encountered however I did frequently find my character ‘sticking’ – I would be moving and then the character would suddenly stop despite my thumb being firmly pressed down on the D-pad. There is the possibility that my Dualshock is at fault but I’ve never experienced this before in other games. Besides those hiccups there’s nothing else I can hold against Omega Strike. It has solid combat, a great sense of humour, a huge variety of enemies to fight, cute pixelated violence and a cool switcheroo game mechanic to boot.

Why? Omega Strike successfully apes action shooters from 30 years ago without feeling or looking like a derivative clone. Shooting feels powerful, animations are detailed and fluid, and switching between three soldiers on the fly is incredibly cool.

But… It’s not the best example of a Metroidvania. Maps don’t intelligently link together with secret paths, and you will get tired of flitting between the locations after every upgrade. After 4 – 5 hours the repetition will burn a hole in your brain.