The Elis James & John Robins Podcast is special. To me and to thousands of other people who call themselves PCDs (Podcast Devotees). It’s special for a number of reasons. Reasons that I’ll struggle to express because they are so close to my own heart. After 5 years of podcasts totalling 264 regular episodes and a clutch of bonus shows on top of that; every week, since the first episode went live on 16/02/2014, I’ve listened to the podcast version of two friends lucky enough to broadcast together on a Commercial Digital Indie Radio Station (Radio X (formerly XFM)) and in the process feel like they’ve become my friends too.

The show is built on the rapport of a long time friendship; the badinage it spawns has been a beautiful, funny and heartwarming part of my life. They met on the Stand-Up Comedy circuit in the mid 2000’s as they were both starting out their careers. Elis & John couldn’t be more different and the show only benefits from the comedic conflict this creates. Elis has a tendency to turn up “late”, meaning he would arrive shortly before they go on air, while John was often several hours early. This is often joked about and leads to one of the best episodes of the show titled “Tick Tock Robins” where John sleeps in and Elis is able to lord it over him for a couple of links until John arrives in the studio. It’s a brilliant episode that works because of the genuine nature of the many episodes that precede it. This is just a single example, there are many, many more just as funny as this one.

It would be reckless to unleash “The Unproducables” on a studio without supervision. They’ve had a few producers over the years who’ve been charged with holding the reigns and keeping “a steady hand on the tiller” First to take charge, helping to shape the show immeasurably was Prod D, Dave Masterman. Dave has the honour of being the first but there have been a few producers over the years and all of them have helped make the show what it is. Not just with their technical know-how but also their personalities, support and input. Many of them started off as interns and we have seen them grow over time. So to the Producers; Vin, Trav, Joe and all the others who’ve been a part of it over the years, I say thank you. 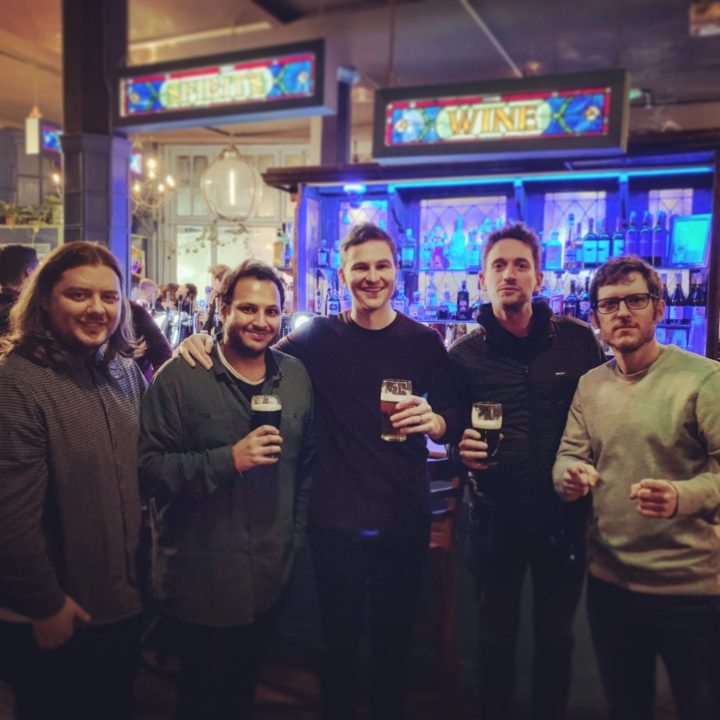 However there is more to the show than two funny friends having a laugh on the radio with their producer back-up. Elis & Johns disarming honesty about themselves, their lives and their mental health is one of the stand out elements of the show. They never set out to change attitudes or to be champions of mental health awareness but they’ve become them just by being themselves on the show. The stories of John’s relationship with what he calls “The Darkness”, the tackling of shame through the John’s Shame Well segment are illuminating. John answering “terrible” to Elis asking him how he is, is an empowering one for so many people who still default to answering “fine” even when they are not. I still default to that answer a lot of the time but I know I shouldn’t now thanks to the show. “It is okay to not be okay.” a mantra that the boys embody on their show entirely naturally. Yes, it is usually John who “isn’t okay” but his honesty on the show wouldn’t be possible without Elis’ supportive, non-judgemental, arm around the shoulder approach to all of it. Elis is fundamental to that element of the show, if he was any other way or didn’t understand John as well as he does it just wouldn’t work.

Which brings me to the other side of how the show has impacted my life. As we all know, a single look through just about any comment section will show you, the internet is full of terrible places. The PCD community, the friends that I’ve made in the Facebook group and the various sub-groups that have grown from it have been a hugely positive part of my life. So many supportive, funny, helpful people from all across the world that I’ve had the pleasure of getting to know over the years. All of them were brought together by this single podcast. Just as people still talk about their love of Adam & Joe’s podcasts now, I’m sure I’ll be just like them only I’ll be talking about Elis & John.

I’ve previously reviewed the show (check it out here) that review remains relevant with regards to the technical elements of the podcast, so I won’t repeat myself here. Suffice to say, that wherever and whatever Elis & John go on to do next. They leave behind them a brilliant legacy, whoever takes over their Saturday 1-4pm slot has big shoes to fill.

It’s important that we end on a positive note. Of course it is sad to see something I love come to an end. However I know that wherever they go and whatever they do next, together or otherwise, they’ll bring joy to those who experience it. I’ll probably be one of them.

Playing Pode On My Own Made Me Feel Lonely