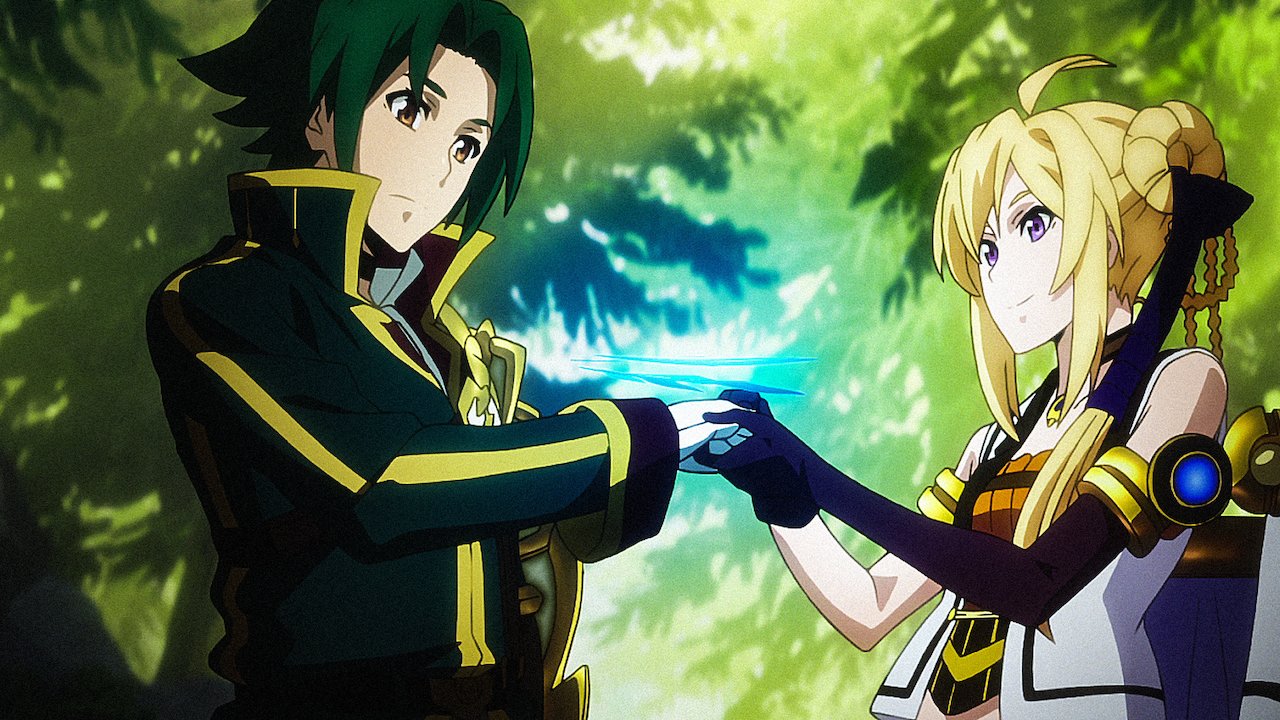 Record Of Grancrest War is an anime that aired in 2018, based on a light novel series of the same name, by A-1 Pictures. It’s an anime I enjoyed watching but as I’ve sat with it since I’ve had more and more problems with it. I enjoyed it as I watched , but it was apparent from the outset that the pacing was only going to have 1 speed – breakneck. In the 24 episodes there’s no time to really appreciate the good points or the bad of what happens. I wonder, if I hadn’t binged it in a single day, would I have stuck with it to the end? I’m not really sure.

Let’s start with the good. It’s an interesting fantasy world, there’s a lot to it. It’s multi-faceted with lots of layers of intrigue giving the world depth and a “real” feel. There’s 2 main power blocks of factions vying for control over the continent, each of which has sub-factions, powerful players and varying agendas. There are also Institutions shared across them such as The Mage Academy, who’s rules and influence are felt throughout events. There are some interesting characters, with good performances from the english voice cast, the protagonist Theo as voiced by Brandon Winckler as well as Siluca as voiced by Jeanne Tirado and Villar as voiced by Greg Chun are particular stand outs Though not all are, as is often the case in anime, several secondary/background characters are a bit one note and don’t deviate from their archetype or gimmick.

The presentation by A-1 Pictures is good, I like their animation style. The vivid colours, weighty encounters and fluid motion really bring the battles and magic to life. The character designs are good, they are expressive and emote in an engaging way. Save for a few CGI scenes that look a bit out of place, there isn’t a whole lot wrong with it to my eyes. Some of the sequences are quite impressive. One that stands out is a battle scene where the character commanding an attack conducts the battle like painting a canvas, the visual style of how it is presented is really quite nice; It’s truly one of the more impressive scenes.

Now, for the bad, I don’t really know where to start. The pacing is unbelievably quick. Entire series are usually dedicated to overthrowing a corrupt and entrenched regime on an entire island and this show deals with it in a single episode near enough. Perhaps two if I’m being incredibly generous. That’s too quick and it rather undermines the achievement in my eyes. There’s a brilliant sequence of events at Theo’s home village that sparks the rebellion then… *blink* you missed the rest of it. It’s done. That just isn’t satisfying enough. In the same token, the relationship between Theo & Siluca doesn’t feel earned. We don’t spend enough time with them, doing what they are doing and building their connection.

Even the way they meet and when Siluca decides to join Theo is rushed and unnatural . It’s a classic “white knight rides in to save the damsel” or more accurately “idiot man butts in unnecessarily because he doesn’t think she’s capable of handling herself”. Siluca’s carriage is stopped by some bandits and she steps out to confront them. She’s a mage, more than capable of dealing with a few numpties wielding swords and furthermore, it’s later revealed that her carriage driver is a “Shadow” – a sort of ninja type character who uses magic to move faster than the eye can see. He’s more than capable of killing every single one of them in a heartbeat. So she’s not in any danger at all when Theo comes “to the rescue”. I understand that the show is trying to introduce him as the hero of the story and that’s part of the problem. This is a clumsy way of doing it, if they’d taken the time to show Siluca whack a few dozen idiots and then get into trouble where Theo’s intervention was needed it would make a lot more sense.

Which brings me onto a particular issue I had with this show. On two occasions Theo takes advantage of Siluca’s trust and violates her consent. During one scene he kisses her openly in front of another character (and loads of their soldiers) just to rile them up and get a reaction. As a political ploy, it makes logical sense and has the intended effect on the other character so it does work… but Siluca didn’t consent to it. He could’ve asked or told her his plan but he didn’t. At another point, they’ve agreed to get married but are keeping it a secret until after the war is at an end. At a summit between the faction leaders, Theo just tells them all, taking Siluca by surprise. If that was a real relationship that actually meant something he’d have consulted her on it beforehand.

I think in all honesty, pacing aside, my real problem with this show is that Theo is the focus when it should be Siluca. Right from the start it’s clear that Siluca is incredibly smart, ambitious, confident and skilled in ways that few others are in this world. Theo’s human touch and affinity for ordinary people compliments her acumen in magic, politics and strategy really well. We just don’t see enough of her brilliance. She plays a pivotal role in everything that Theo nominally achieves and yet we hardly see any of it. I’d like to know if the light novels are better in this regard, I’m fairly certain they won’t suffer from the same pacing issues that the series does.

Making anime is a tough gig and a lot of series end up being one and done. Lost in the flood of content that’s made, only so many can succeed and spawn sequels. So, I understand the desire to condense it all down and tell the whole story in a single season. That way it doesn’t become yet another anime that will never get a true ending. It’s a real shame though, so much gets lost in the end regardless.

Tanked Up 187 – The Three S’s, Sparklite, Star Wars and Stadia