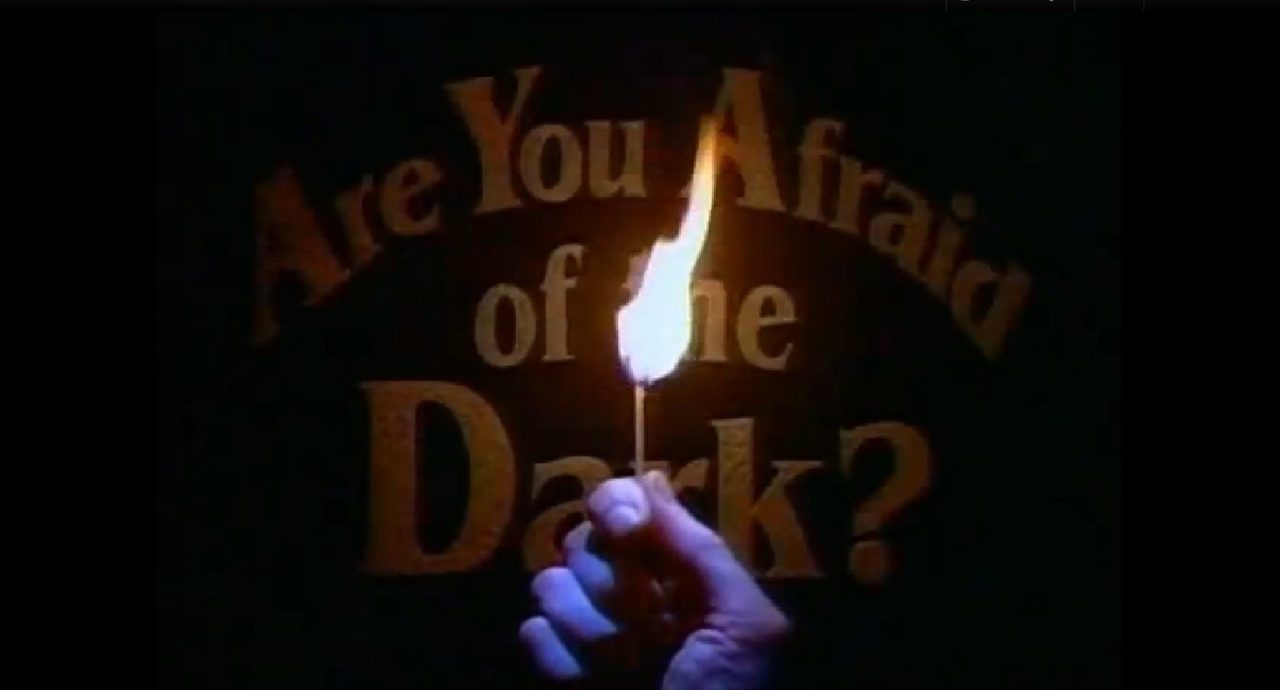 Rewatching the ‘Are You Afraid of the Dark?’ Episode That Traumatised Me

How a chance YouTube recommendation led me on a path of half-remembered childhood terror and nostalgia.
by Kyle Barratt 03/08/2021

The algorithm for YouTube recommendations has vastly improved over the past few years. Whereas once the video streaming site would pelt me with vloggers flaunting their cash or James Corden singing (nah, you’re alright), my YouTube is now an endless hub of Alan Partridge clips (please and thank you). In fact, the recommendations have gotten so precise that it feels like the algorithm has delved into the deepest wellspring of my being and plundered half-forgotten hopes and fears, the resurgence of which both shock and delight. One day YouTube offered up an episode of Are You Afraid of the Dark? and a wave of unnerving nostalgia washed over me. The title card of the hand holding the lit match was an image from my childhood but one I’d kept suppressed. It suddenly hit me that this was the show that traumatised me as a child. 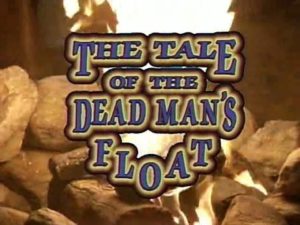 I had vague memories of a specific episode. A red monster that floats in a pool. It would bubble up through vents and grates and pull children down into the depths to their doom. It made me scared of water for a while. The bath for a short time, the pool a little longer. Even now the metal bars under the water at my local leisure centre, the ones that contain the enginery for the wave machine and almost beckon a stray foot to become trapped, fill me with dread. A quick search and I found the episode and the sweet, terrifying nostalgia that swam with it, truly like the pain from an old wound. Are You Afraid of the Dark? Season 5 Episode 1: The Tale of the Dead Man’s Float. The whole damn episode available on YouTube. Time to face my fears, I thought.

This specific episode of the 90’s Nickelodeon horror anthology show first aired just a few weeks before my birth in October of 1995. I don’t know when I first saw it but I was young. Too young. That’s the danger and wonder of having an older sibling: having to watch what they want to watch. The episode opens with the Midnight Society trying out a new member, and we see the story he tells the group play out in front of us, beginning back in the 1950’s. A young Jay Baruchel is drowned in a pool by some invisible force while the lifeguard fools around with the boy’s sister. He dies! In the opening scene! I thought this was a kid’s show. Even Batman: The Animated Series had to show that criminals somehow survived great falls or beatings to get approval by Standards and Practices but Are You Afraid of the Dark? was clearly free to murder as many children as they wanted.

Rewatching the episode, it’s fun to pick out the horror influences of the series, which I can now recognise. The boy’s death and the distracted lifeguard is similar to the circumstances of Jason’s ‘death’ in Friday the 13th. The underwater POV shots are straight out of Jaws. And then we jump forward in time to the 1990’s (oh, it’s so very 90’s), which plays with the theme of returning, generational horror from stories like Stephen King’s IT, which I love. Now that we’re in the 90’s, we’re introduced to the episode’s protagonists, the bookish Zeke and the feisty Clorice. I guess “Clorice” is like Clarice from Silence of the Lambs but with some added chlorine. Zeke is making a papier-mâché volcano complete with spewing lava, which is something a student in every American school drama or comedy I’ve ever seen has also made at some point. Is it a real thing they do or just a trope? Either way it’s included for one purpose: to show that Manganite mixed with water goes boom.

Zeke and Clorice discover a disused pool, the one from the opening scene, and, in exchange for chemistry tutorage, Clorice, an avid swim club member, decides to teach Zeke to swim. While floating in a boat in the pool and sharing a quiet moment, Zeke is suddenly grabbed and pulled under in a jump scare that’s decent but somewhat telegraphed. He escapes, somehow, and the two are trapped on the inflatable as the invisible force bounces them around like a Centre Parcs ride. This is where it begins to feel more like a kid’s show; clearly a person off-screen is just shaking the boat but as a child I could see this being very scary. Luckily, they’re saved by Charlie, the school custodian, who reveals himself to be the lifeguard from the opening, haunted by both his failure and the pool monster. He explains that the pool was built over a cemetery and while the bodies were supposed to be moved, one was left behind. Hey, like Poltergeist!

Science nerd Zeke decides to pour chemicals into the pool to turn the monster visible, and unlike some of the other scares, this remains a fantastically effective sequence. Sudden appearances by spooky ghosts or monsters are good for cheap jump scares and shocks but true terror is something horrific slowly becoming visible. Something you don’t at first see but then suddenly you can make it out, like an object in the corner of a dark room. Hereditary is a film that plays with this technique brilliantly. When the chemicals enter the water, we can begin to see a mass form. It’s undefined and dark. Slowly details become clearer and not only is something taking shape but it’s rising towards the surface. A red skeletal, zombie-like figure floating upwards. “The Corpse.”

The Corpse is an impeccably executed horror monster, especially for a 90’s kids show pumping out countless episodes week-after-week, year-after-year. Watching it stumble around would betray the terror so instead it supernaturally rises out of the water and moves by melting down into red slime, which looks very much like blood without being blood, and emerging from grates in the floor. Red is the perfect colour for the monster. It’s a kids show so the red colouring gives the indication and idea of blood and gore without actually showing anything. A child’s imagination will scare them more than anything that can be shown and so the Corpse is purposefully lacking definition. Is there a gaping hole in its chest or belly? I think that’s clothes hanging off it but could it be skin? It has a skeletal face but also hair and flesh so is it more of a zombie? I don’t know the answers to these questions because the costume lacks straight lines and clear detail. All I know is that it’s terrifying.

After a chase on land and sea/pool, Clorice uses a handy tub of Manganite to dissolve the killer corpse and end the horror once and for all. But safety first, of course! Somehow there’s a pair of protective gloves at the side of the pool in case such a situation should arise because in a kids show, even in the heat of supernatural battle, chemicals need to be treated with the appropriate caution. For an episode barely over twenty minutes long, it wraps up in a satisfying way for each character. The monster is defeated; Charlie is free of his memories and pain; and Zeke and Clorice get together and enjoy themselves at the pool after her chemistry has improved and he learns to have a little fun – even if he chooses to stay in the boat.

Revisiting this episode of Are You Afraid of the Dark? was a very strange experience. For years I had no idea what I saw that terrified me so much. Whether it was even real or simply a childhood nightmare. All I remember were images of a red blob, not so much the humanoid zombie we get in the show, entering and exiting a pool through vents and conduits. I had long overcome the fear it distilled in me but, I admit, the prospect of watching it again made me sweat. It didn’t scare me these decades later – I feel like Macaulay Culkin in Home Alone, preaching to the street “I’m not afraid anymore!” – but it was great to experience the actual episode rather than just my vague memories of it. I now appreciate The Tale of the Dead Man’s Float as a piece of horror history, a piece of my horror history, and the great influence it draws from the genre. For a kids show, it’s genuinely creepy. Am I afraid of the dark? No. But a gloopy red skeleton zombie pool monster? Yeah. A little.

Do you have a history with Are You Afraid of the Dark? What scared you as a child? Let me know in the comments and be sure to geek out with me about TV, movies and video-games on Twitter @kylebrrtt.

Tags
Are You Afraid of the Dark?
Categories
ArticleOpinionTVTV And Movies
SHARE THIS ARTICLE
PREVIOUS ARTICLE