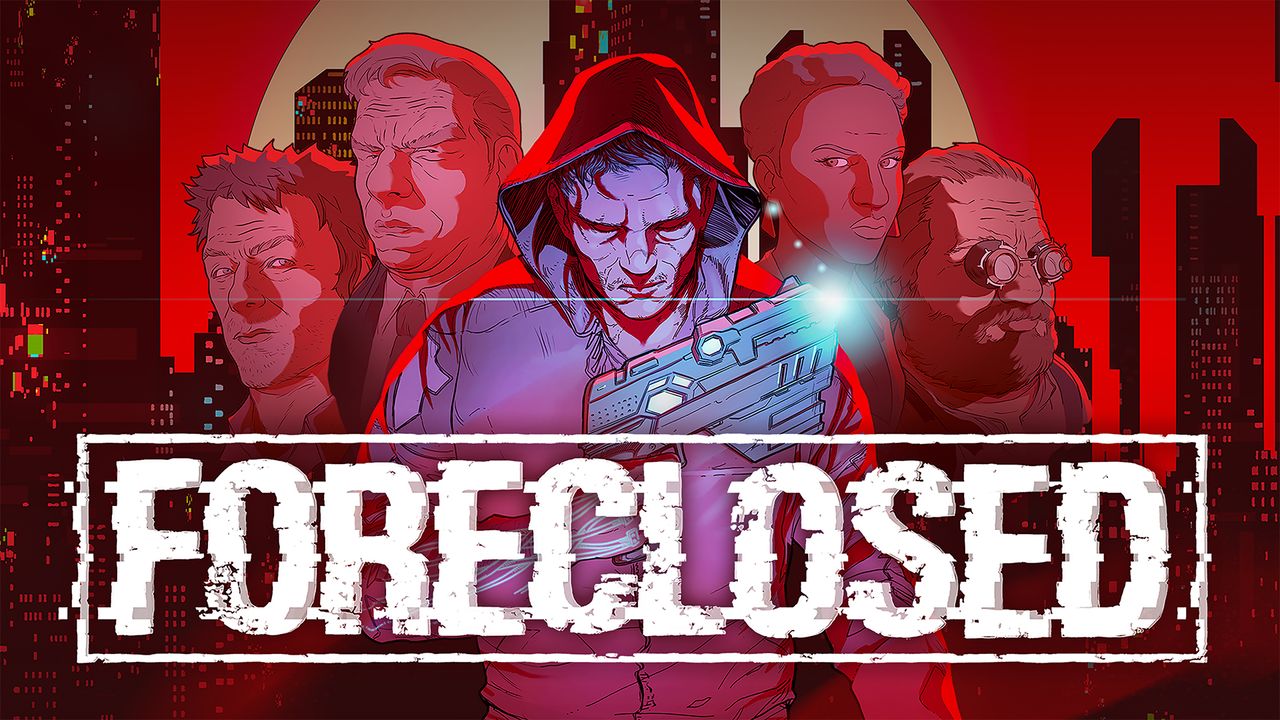 Foreclosed takes place in a dystopian Cyberpunk America where identities are owned by corporations. It’s May 3rd 2084, and Evan Kapnos wakes to find out his employer Securtech has gone bust. This means his identity is up for auction. To prevent him from leaving the city during this period, Evan cannot use his firearm, cannot see faces and cannot freely roam the streets. On his way to the courthouse (which he is ordered to attend within 24 hours) he is nearly assassinated. Now on the run, Evan must find out who is trying to kill him and prevent him from missing his court date.

Foreclosed is essentially an interactive comic book with an emphasis on action and stealth rather than on storytelling. With its cel-shaded graphics and its cut scenes that animate the static panels of a graphic novel, Foreclosed’s crowning achievement is how it successfully convinces you you’re flipping through the pages of a pulpy 80’s comic. Unfortunately, that’s the only good thing to say about it. The action and stealth elements are clunky and undeveloped, and even though the story has been overlooked it still manages to be the best part about it, even when the plot doesn’t particularly make any sense due to the lack of backstory or exposition.

For example, Evan is given the ultimatum to attend court or his identity will be foreclosed but it never describes what this means. Will Evan be excommunicated, executed or exiled? It’s never explained. Even though we know Evan works for Securtech it’s never explicitly said what his role at the company is. Security guard? Data entry clerk? Janitor? Nobody knows! Foreclosed doesn’t even elaborate on what Identity Debt is. It’s clearly something that exists in this world because the writers can’t stop banging on about it but for the benefit of the player it needs explaining in some capacity otherwise its importance goes ignored.

There’s the illusion of free will during conversations. Foreclosed gives you a handful of responses to pick from but it won’t matter what you choose because you’ll only fall victim to the same spiel to push the story forward. What’s really confusing is how Evan narrates the game but none of the interactive conversations have him speaking. It’s almost as if it was a second thought. It makes no sense because the dialogue trees try to convince you that you can build your own personality for Evan but the cutscenes with Evan talking have already established his tone and personality. There’s a laundry list of problems to touch upon but rather than waste everybody’s time let’s just focus on the meat and potatoes of Foreclosed: the action and stealth gameplay.

Evan has been enhanced with cybernetic augmentations which opens the door for some cool upgrade opportunities, and although some of the upgrades are indeed cool none of the gun upgrades are helpful. In fact, they ‘enhance’ the gun so much that it becomes impractical to use – so much so that it’s pointless using them at all.

It’s frustrating because the game funnels you down avenues to take advantage of your new upgrades but it fills every room with so many enemies your only option is to duck-and-cover until you can force your way through. The first upgrade you unlock is the ability to fry people’s brains but you can never get close enough to anyone to use it. Foreclosed wants you to use these cool abilities but only when Foreclosed wants you to. There’s no melee either. Like, seriously, wtf? The guy has the strength of a robot and the butt of a gun but can’t lift a finger when in close proximity to a person. It’s a massive oversight.

Enemies can only be described as bullet sponges too. Evan has unlimited ammo but that doesn’t justify the absurd number of bullets the enemies absorb. Coupled with the absurd number of enemies in each room, Foreclosed is a messy and annoying game to play. Death is certain as you try to calculate the perfect path to take, and it often feels like the odds are against you.

Everything about Foreclosed feels antiquated. Foreclosed would have been a good game 20 years ago but its unrefined gameplay and lack of environmental details don’t cut it in this day and age – especially in the wake of the latest consoles, when peoples’ expectations couldn’t possibly be any higher. To top it all off, the ending is nonsensical rubbish that tries to imitate neo-noir Cyberpunk clichés but it doesn’t make much sense or doesn’t do much to course-correct the nonsense before it. In the final moment you can choose how the game ends but both options are unfulfilling and are devoid of any drama, suspense or closure.

It cannot be stressed enough: do not waste your time with Foreclosed. It is better left forgotten.

Why… Simply put, Foreclosed is a terrible game and nobody should feel bad for thinking so. Everything, from the story to the gameplay, reeks of disappointment.

But… Unless you want to show your support for the developers there are no good reasons to pick up Foreclosed.