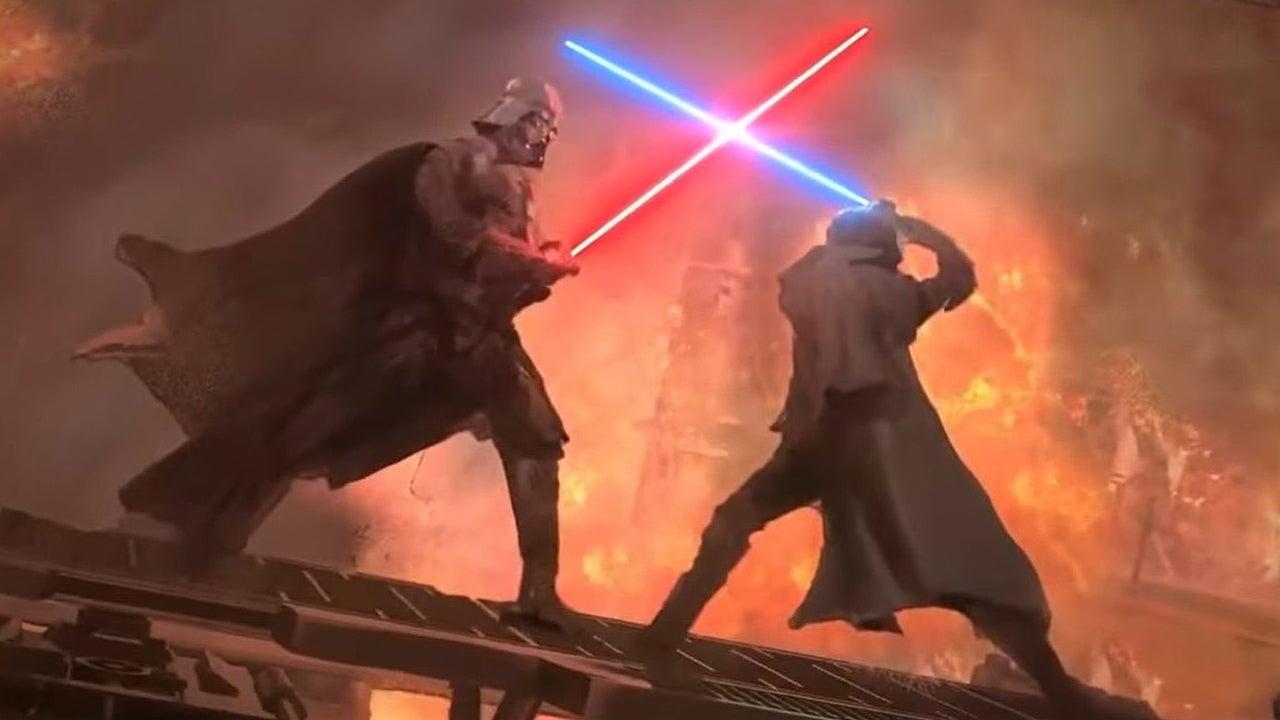 Our first official look at the Kenobi series may not be the trailer some people wanted, but the concept art still reveals plenty of insights
by Kyle Barratt 23/11/2021

2021’s Disney Plus Day came and went, and with it that internal balancing act of being excited for future ‘content’ while understanding you’re falling for the machinations of a huge, greedy corporation. While there was plenty of Marvel and Pixar news, Star Wars had little to show on what became the angriest Twitter thread of the year. I would have been more disappointed myself if I wasn’t in a holier-than-thou mood, laughing at just how stupidly bitter some Star Wars fans were getting. But while we didn’t get the trailers that we were never promised in the first place, a sizzle reel full of concept art for Obi-Wan Kenobi was released, although you were able to watch it a day early if you were quick to click on the soon-to-be-deleted video, and the images still have plenty to tell us about the content of the limited series. At this point in the timeline, Obi-Wan, or Ben, is the rapidly-aging man in the desert, the twin suns being harsh on the skin and aging people at twice the rate. Yes, that is the canon explanation. We’ve seen fan art of Obi-Wan in the desert for years now, silently watching and protecting Luke in his self-imposed exile, but what I like most about the image isn’t Kenobi himself but rather what he’s sat on. An eopie! Not a dewback or a bantha or a speeder or anything from the original trilogy but a goofy-looking farting eopie from the prequels. The series is set in-between the prequels and originals and, because Lucasfilm is much more obsessed with creating the look of the originals in the other shows and films, I’m happy that the brilliant design of the prequels is returning in some form, and I hope there are more connections. We’re getting returning prequel cast members with Joel Edgerton and Bonnie Piesse, as well as Ewan McGregor and Hayden Christensen of course, so hopefully this is the start of the prequelenaissance onscreen rather than just in our Gen Z hearts.

But Kenobi can’t spend all six episodes on Tatooine, although I’d happily watch that show. I’ve speculated before that he would leave to seek out Vader, after discovering his former apprentice lives, and try to reach out and save him. But the next concept art may indicate differently. Obi-Wan might leave to protect Luke and draw the Inquisitors, who have perhaps gotten wind of a surviving Jedi on the planet, away from who he perceives as the ‘Chosen One’. I love the Inquisitors from other canon, especially Rebels and Charles Soule’s 25-issue Darth Vader comic, and am so happy to see them appear in a live-action series. Their appearance also tells us that Obi-Wan will be clashing lightsabers with more than just Vader, with the Jedi hunters allowing for multiple smaller battles leading up to the rematch. It’s worth noting that the concept art seems to show the Second Sister from Jedi: Fallen Order but I think she’s just used as a stand-in for the image and won’t actually be appearing, especially since she’s dead at this point. But hey, it is Star Wars. The next image shows some sort of imperial stronghold full of stormtroopers. When I first saw the art, my prequel-loving brain initially shouted “the Jedi temple that is now the Imperial Palace!” but now, I’m thinking differently. The architecture is similar with the huge open spaces and columns but, looking outside the windows, it seems to be underwater, which is cool. Former Jedi temple or not, I think this shows show the Empire has taken over places of great beauty and warped them to their will and design aesthetic, and I’m intrigued to get some scenes away from Obi-Wan and in the heart of the still-young Empire. The location may even be Nur, a water moon in the Mustafar system that was home to the Fortress Inquisitorius, the headquarters of the Inquisitor program, as seen in Jedi: Fallen Order. After leaving Tatooine, Kenobi will have to go somewhere and wherever it is it seems like it could be another wretched hive of scum and villainy. The concept art shows a dense, dark, dangerous-looking urban environment that looks familiar yet different, a hallmark of Star Wars design. Could Obi-Wan meet with a contact here or gain a new ally? Could Dexter Jettster have moved his diner business? It’s hard to glean much from the art other than to say it looks pretty good. It’s probably a brand-new location but it does look similar to Nar Shaddaa, a world full of criminality that often appears in other canon material but we’ve yet to see onscreen. Or maybe it’s the lower levels of Coruscant. I doubt it but it would be interesting to see Obi-Wan have to infiltrate the imperial heartland and see his old home under occupation.

I found this next piece of concept art the most surprising. We see T-47 airspeeders, which were later modified into snowspeeders in The Empire Strikes Back, in a makeshift hanger that has all the telltale signs of the Rebel Alliance. Yet the Alliance as we know it doesn’t really exist at this point, it’s more a collection of disparate cells. Just because we see this early rebellion doesn’t mean that Obi-Wan himself will. Maybe, as with the Imperials, we’ll get some scenes with a rebel which will then later tie-in to Kenobi’s story, or maybe Bail Organa himself. Or there’s nothing to say that Kenobi didn’t encounter the rebels at some point, creating ties that will be called on in Rogue One/A New Hope. Personally, I don’t want Obi-Wan to be too entrenched in the galactic conflict and instead have the show remain a personal story between him and Vader. I love Darth Vader and I’m so happy Hayden Christensen is returning and being appreciated by the fandom and yet, I think I might be more excited to see more of Vader’s abode than Vader himself. Vader’s Castle is just great in every way, from the design to what it means; Vader seating himself on the spot he was beaten by Obi-Wan, stewing in his anger, hate, and pain to keep him connected to the Dark Side. I was disappointed with the opening of Rise of Skywalker that took us to Vader’s Castle without actually showing us Vader’s Castle, and getting more of it in this series makes perfect sense, including a look at the Dark Lord’s teleconferencing suite. I hope Vader is teased throughout the show, a little more in each episode until the big rematch in the last episode, although, of course, I want Hayden to get some good scenes and I’m convinced his casting is more due to flashbacks to the Clone Wars, which will be amazing to see if true. Speaking of the rematch, the final piece of concept art gives us a look at the battle, with the combatants fighting amid a burning landscape on yet another perilous walkway. The locations of lightsaber duels are often representative of the fights themselves. In A New Hope, Obi-Wan is surrounded by the oppressive imperial war machine as he’s dominated by Vader. In Revenge of the Sith, the literal hellscape represents Anakin’s tumultuous and boiling anger and hate which eventually gets the better of him. I am a little disappointed that his fight looks similar with the flames, smoke, and overall colour scheme. It makes sense, with hot emotions returning, now more smouldering than boiling, but I like the idea of fighting in a former Jedi temple that is falling apart or has been taken over by the Empire, symbolising Anakin/Vader’s situation. Having the fight feel too close to the Mustafar duel could feel cheap, unimaginative, and repetitive, but it’s far too early to make such claims and the finished product could be much different than the concept art.

Oh, and does the idea of a rematch at this point in the timeline makes sense? Yes!

Lucasfilm might love to announce projects that ultimately never get made but when it comes to promoting shows and films that are definitely coming, they hold off on promotion until close to the release date and allow one to air before beginning to fully promote the next. While we may have been caught up in rumours, expectations, and speculations, the lack of an Obi-Wan Kenobi trailer at this moment in time is unsurprising, and I’m happy with the slow rollout and small, fascinating morsels we can obsess over until the show releases in 2022.

What are your thoughts on the Obi-Wan Kenobi concept art? Let me know in the comments and be sure to geek out with me about TV, movies and video-games on Twitter @kylebrrtt.