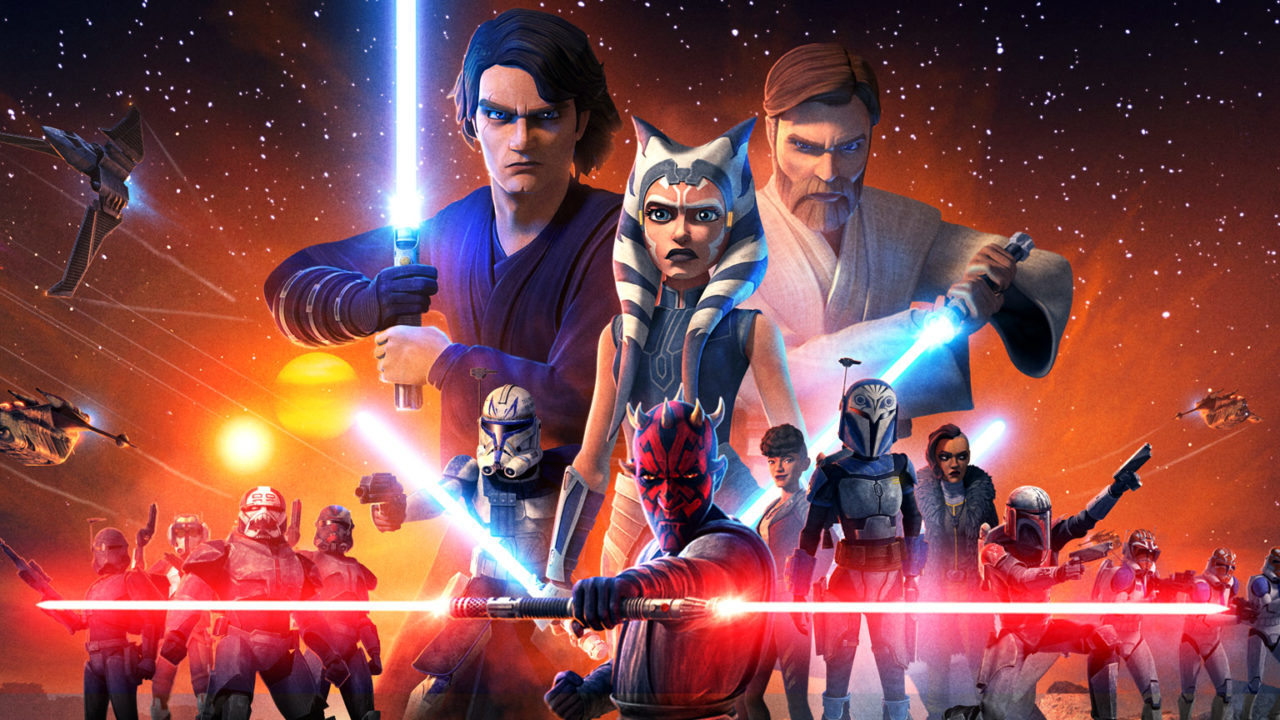 The perfect way for new viewers, perhaps fans of The Mandalorian and The Book of Boba Fett, to catch up on the essential episodes of the animated series.
by Kyle Barratt 15/02/2022

As the slate of Disney+ Star Wars shows grows it’s becoming clear that not only the core films are required viewing for understanding the complete context of the stories but The Clone Wars animated series too. While the live-action shows should work well enough for new viewers, to understand them completely one must go back and watch the animated series that preceded them. As the first canon television series, The Clone Wars introduced a huge number of new characters and stories that are now weaving into the latest shows, whether it be the backstory of the Mandalorians or Cad Bane appearing in The Book of Boba Fett.

Beginning all seven seasons (and a movie) is a daunting task so I’ve created a curated viewing guide of the best and most essential episodes that give both a complete overview of the story of the show itself and everything necessary to understand the stories that have since grown from it.

A note to remember: much of the show was not in chronological order (Lucas up to his old tricks) so I’ve moved some arcs around for viewing ease.

On this list I’ve made an effort to remove the weaker episodes and arcs and offer up the best of the best. Yet there can be no skipping the movie that kicks off the series in disappointing style. It can be a rough watch, not indicative of the quality of the series to come, and make you question whether you want to continue. But do! It gets better but the film should still be the beginning of your Clone Wars journey because it introduces the show’s dual protagonists: Ahsoka and Rex.

There’s no better place to start the show proper than the first Mandalorian arc of the series, especially for fans of The Mandalorian and The Book of Boba Fett. So much ongoing lore and storytelling originate from this arc, such as the Darksaber, making it vital viewing.

S2E3 Children of the Force

This is a solid arc notable for being Cad Bane’s first chronological storyline in the show, a character who will become a major presence in the series and has now crossed over to live-action in The Book of Boba Fett. We also get the Jedi making questionable decisions and Sidious having an interest in force-sensitive babies (Grogu, anyone?)

This may not be the strongest arc but if you’ve been clamouring for Boba Fett vs Mace Windu then look no further. It has nice development for Boba and is a key piece of his character journey. Plus, Aurra Sing is pretty cool.

This out-of-order trilogy of episodes introduces a clone squad that will become a huge part of the series. Those who survive anyway. The clones are the heart of the show and this is necessary viewing to understand their perspective on the war.

S3E10 Heroes on Both Sides

Come on, you’ve got to watch at least one Padme political arc and it might as well be this one. The Clone Wars expands on the politics of the prequels and this is the best example of that examination done right. A semi-regular character is introduced and the two-parter offers a fascinating new perspective on the separatists.

S3E14 Witches of the Mist

This is where the show gets great! The beginning of the Dathomir arc that expands Asajj’s role in the story and leads to so much more. Truly different, brilliant Star Wars.

The less said about the ‘Mortis Trilogy’ the better. Not because it’s bad, quite the opposite, but because I don’t want to spoil anything. Go in with an open mind and you’ll come out with a brand-new outlook on Star Wars.

A fun arc that introduces Tarkin to the series, drawing many elements of Star Wars together and hinting at Anakin’s future. It’s also important viewing for the storyline of a certain clone trooper, but may not seem like it at the time.

Predator starring Chewbacca. Who doesn’t want to watch that? This two-parter may seem disposable but it’s actually the middle point of Ahsoka’s arc and the final scene will have so much more impact later on.

This is my favourite arc of the show. Clone-centric Band of Brothers. The perspective of the troopers is examined by forcing them through a gauntlet of extreme physical and emotional trials that leads to treason. It’s shockingly dark, beautiful, and some of the best Star Wars ever produced.

This is a vital bridge episode between Mandalorian arcs and introduces one of Star Wars television’s best characters: Bo-Katan.

This arc is great on two accounts. It’s a good bounty hunter story including the likes of Cad Bane and Boba Fett but also is important for Anakin’s eventual fall, with the Jedi’s flaws and Palpatine’s machinations being highlighted.

The Dathomir arc continues and gets darker, stranger, and even better. Asajj develops into a deeper character and Maul makes his long-awaited return. A huge, important arc.

S5E2 A War on Two Fronts

A solid story notable for introducing Saw Gerrera, making it vital viewing for understanding the full context of his appearances in other media, such as Rogue One and the upcoming Andor.

These are some of the best episodes of the series. A fantastic merging of the Maul and Mandalorian arcs.

S5E18 The Jedi Who Knew Too Much

For a while this was the original finale of the show when it was cancelled. Thankfully we got more episodes but even so it still has the weight of a final arc and closes a chapter on Ahsoka’s journey.

Want more details on Order 66? Then this is the arc for you! A surprisingly emotional storyline featuring Fives that answers questions while setting up elements for future storytelling.

A trippy, weird odyssey into the heart of the force with Yoda that goes some way into explaining force ghosts. It also tries to explain what the deal with Sifo Dyas was but I’m still not sure I understand it. Enjoyable nonetheless.

S7E3 On the Wings of Keeradaks

If you want to watch The Bad Batch after The Clone Wars then this backdoor pilot is necessary viewing. But even if you don’t it’s a good arc that feels like the beginning of the end for the clones and the war.

The end of the series, and a satisfying one at that, bringing together several threads and offering the right balance of closure and set-up for future shows. The level of improvement in every aspect from the movie to this final arc is incredible.

Going to follow my episode guide? Think I’ve left off a vital episode? Let me know in the comments and be sure to geek out with me about TV, movies and video-games on Twitter @kylebrrtt.