The light hearted zombie police procedural makes its way to UK Netflix, get the summary here!
by Alex Waite 06/05/2016

Thanks to the wonder of Netflix, UK subscribers can now experience the first two seasons of comic book based iZombie. The show, based loosely (very loosely) on the DC / Vertigo book of the same name, follows Olivia “Liv” Moore, a fully functioning zombie in Seattle. The police procedural follows Rose McIver’s Liv as she balances her full-time role as a coroner’s assistant with consulting for the police and maintaining her cover as a perfectly normal human. Liv, alongside her partner Detective Clive Babineaux (played by Malcolm Goodwin), investigates murders in the Seattle area. While her investigative skill leaves a lot to be desired, her special ability sets her apart. By eating the brains of the deceased she can experience flashes of memory, helping her ever patient partner crack the case. Viewers should not expect to see Liv feasting on the skull of her victims either. Unfortunately, being “in the zombie way” dulls the tastebuds somewhat, leaving Liv to add lashings of hot sauce to her meals, presented exquisitely! After all, a good meal tempts all of the senses, sight included! 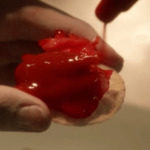 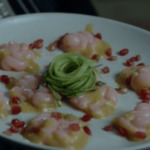 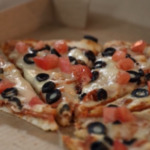 However, not only does she adopt some of the memories of the deceased, she also absorbs some of their personalities. Whether it is “overly cheerful brain”, “college jock brain” or “superhero brain”, each one changes Liv just enough to keep her friends and colleagues guessing, while making an often hilarious situation for the viewer. The ever patient Ravi Chakrabarti

Liv’s boss, medical examiner Ravi Chakrabarti (played by Rahul Kohli) is the quintessential Englishman. Tea drinking, polite, excitable and loyal, Ravi is quick to identify Liv’s condition. His nerdy, enthusiastic manner means he quickly dedicates himself to helping her in the best way he can. McIver and Kohli own the screen when they are together, batting back and forth continuously, bringing humour and emotion in equal measure. The series wouldn’t be complete without the (in this case, ex-) love interest. Major Lilywhite is the handsome, athletic and charitable ex-fiance. Liv broke off their engagement to protect him from her infection, something which neither he nor her family can understand. Major works as a social worker in the city, working with young people. As things start changing around him and boys start disappearing, Major starts his investigation, falling deep into the rabbit hole.

Played by Robert Buckley, the chemistry continues between McIver and him. Whether a conversation turns awkward or a potential rekindling, they are both convincing together on screen. A final character to mention is Blaine DeBeers, played by the fantastic David Anders. A combination of marvelous writing and acting prowess mean that the character of Blaine is easily the most memorable in the show. David Anders owns the scene whenever he appears, and can flit between threatening, mischievous, friendly and manipulative in the blink of an eye. As a principal antagonist of season one, his character plays all sides of the pitch, proving throughout that he is both an important ally and can never be trusted.

I wholeheartedly recommend iZombie to anyone looking for a light-hearted procedural. Amazing cast, exceptional writing and a compelling storyline make for great viewing. Rose McIver successfully brings a new character each episode to the mix, making for different interactions, keeping the show fresh and interesting. Like many new series, the first season takes a short while to find its feet, but by episode 6 it is well in its stride. The first season sits at a moderate 13 episodes, while the second has a few more at 19. This is well done as the stories are not stretched too thinly, nor are they rushed. Season two proficiently brings together multiple story threads, proving the prowess of the writers while never taking itself too seriously. iZombie certainly ticks the boxes for weekday evening viewing, and is prime for binge watching – never too intense to push you away. Fully worth a watch.

iZombie has been renewed by The CW for season 3, airing in USA late 2016.