So this past week we have seen Niantic release its latest up of the worldwide phenomenon of Pokemon GO, and they have started to address some of the bugs...

So this past week we have seen Niantic release its latest up of the worldwide phenomenon of Pokemon GO, and they have started to address some of the bugs and concerns of Pokemon trainers across the world. Updates have “stabilised” servers, allowed further customisation and in its latest release, Niantic is trialling a new tracking system. With the game looking like it will be needing tweaking and updating for years to come, the world is quite literally Niantic’s cloyster (Sorry).

Rumours are that Niantic will be rolling out numerous updates over the coming weeks and months as they look to create the foundations to what they hope to be, a game which has longevity rather than being a ‘flash in the pan’. We have heard rumblings about player events and rare Pokemon being tied to particular parts of the world, but here are 5 alternative updates which could really send trainers crazy:

So as well as having a Pokemon tracker, Niantic could introduce a ‘Trainer Tracker’ to identify when fellow enthusiasts are within certain vicinity (say 10 metres or so). The tracker would only work if both players would have their apps open. At this point, a player to could offer to challenge their opponents to a duel as is seen in the original cartoons and games. Privacy issues a big concern here but who cares?! The Gym system is a watered down version of capture the flag. You reach a marker, secure and keep it for your team and the cycle continues. So what’s stopping the game from introducing modes such has Team Deathmatch and Holding Points?

Team Deathmatch would involve a number of players coming together to battle against teams of players from other gyms- say 6 vs 6. Individual battles between players with the team with most victories being crowned the winner and a shed load of XP

Holding Points would be a slight variation on the Gym system but involving players having to physically be in a location to hold it, allowing them to farm items and/or XP for themselves and their Gym. Now we all know that throughout the Pokemon GO universe, certain areas have been created as “nesting points” for certain Pokemon- which is great if you can identify them and are nearby regularly to pick up all you can catch Poliwag for example. Now there have been murmurings of a possible trading system for people to swap Pokemon they have caught with the Pokemon GO Universe but what about the ability to drop/release Pokemon you necessarily don’t want to keep.  Further yet, what about offering a separate option where trainers can set up a “farm” at a designated Poke Stop and hatch eggs which automatically transfer to these areas. Imagine the community support for this! We can alter our gender, hair and eye colour and the items of clothes of our avatars. But who hasn’t dreamt of having a golden Charizard with flaming Mohawk or an all-black Pikachu with neon turquoise eyes?! Ok I’ll admit pretty random but what if we were able to personalise the look of our Pokemon?! That would make for a truly unique experience! Ok. So this one is a bit farfetch’d so stick with me as I explain as it would need a few working parts. Implementing generational options into Pokemon Go would mean that trainers have the opportunity to become the ultimate Pokemon Trainer; players will be able to switch between different iterations of Pokemon Go which will have different sets of those little critters for you to catch. This will increase the longevity of the game indefinitely and means that updated Pokemon can be added to the game- Generation 2,3,4 can all be added to the game and be collected in a different Pokedex; these could even be created as addons (Damn the micro transactions!) 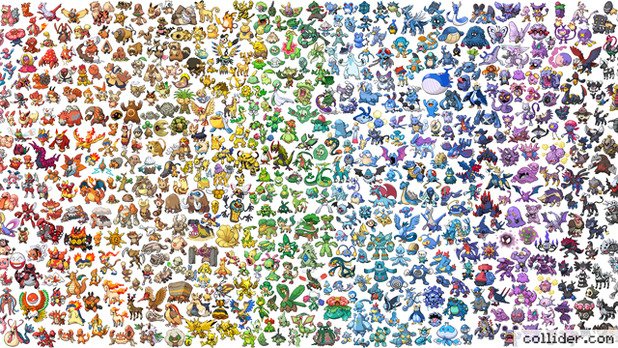 And how about this one for a suggestion from very left field: Being able to capture Pokemon in “real life” through the mobile app and somehow transferring them into the handheld games…

I’m just going to leave that thought there and back away from the computer before the internet breaks….

For all things Pokemon Go keep it on the OOL

Watch The New ‘Rogue One: A Star Wars Story’ Trailer