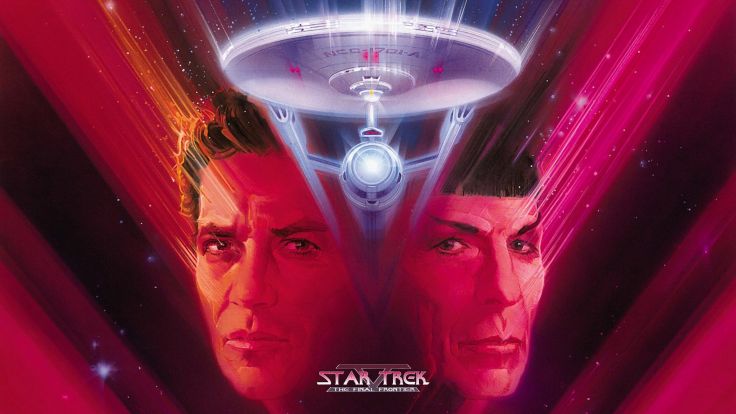 "I watched The Final Frontier with a positive attitude looking desperately for some positives and you know what, I found some"
by Kyle Barratt 28/09/2016

There are several low points in the history of the Star Trek franchise such as the conclusion to Enterprise and the episode ‘Threshold’ from Voyager’s second season. But none however seem to match the distaste, and sometimes hate, directed at Star Trek V: The Final Frontier. The film series had just concluded its unplanned but brilliant trilogy of movies (II, III and IV) which wowed audiences and critics alike and The Next Generation had debuted showing promise despite its problems but when The Final Frontier was released in 1989 it cast doubt over the entire franchise. Looking back retrospectively it’s not a good movie – in fact it’s mostly rubbish –  and since I first watched it I’ve been one of the ‘haters’ but a Reddit comment on my recent article about The Search for Spock being a forgotten masterpiece begged me to reconsider my opinions on Star Trek V. Usually when I’m re-watching the classic movies I ignore The Final Frontier completely going straight from the comedic ‘The Voyage Home’ to my favourite Trek movie ‘The Undiscovered Country’ but this time I watched The Final Frontier with a positive attitude looking desperately for some positives and you know what, I found some.

Let’s start at the beginning of the movie which, before I re-watched it, I thought was the scene in which Kirk climbs El Capitan like a camp version of the opening of Mission Impossible 2 but I was misremembering; the actual opening scene features our introduction to Sybok on Nimbus 3 and it’s surprisingly good. Set in the desert it feels more like a scene from Mad Max than Star Trek and the image of Sybok on horseback as a silhouette against the bright yet dusty orange background is genuinely scary with some on point cinematography and Shatner’s direction surprisingly sharp.  The whole scene is obviously supposed to produce religious imagery but, like most of the religious themes in the movie, it falls flat; instead it reminded me of Stephen King’s The Dark Tower novels with Sybok as The Man in Black/ Randall Flag travelling across The Wasteland tricking its inhabitants just like Sybok does with his ridiculous ‘give me your pain’ brainwashing. However the well scripted scene pushes it’s luck and goes a bit too far (like most scenes and themes in the film) and ending with Sybok manically laughing as we go into the opening credits is silly but overall it’s a good opening to the movie, it’s just a shame it’s mostly downhill from here.

The music. I know it’s often a backhanded compliment to suggest the score is one of the best things about a movie but in this case there is just no getting away from it. Jerry Goldsmith returns to the franchise after having previously scored Star Trek The Motion Picture and brings with him the same main theme from ‘Motion Picture’ which was also of course being was used by The Next Generation at that time. Even though the actual Klingons in the film are awful the Klingon theme returns, refined and better than ever. Goldsmith’s new musical offerings are also fantastic with the music playing during the walkabout on ‘God’s’ planet being a standout and was the only thing keeping me awake during the scene.

One of my favourite things about the entirety of Star Trek is the relationship between the core character triad of classic Trek: Kirk, Spock and McCoy. The triad is displayed magnificently in multiple episodes of The Original Series but had never been translated to film particularity well, at least not until The Final Frontier that is. The campfire scenes are often ridiculed but I’ll happily defend them of exploring the three characters in relation to each other with the acting and humorous script impeccable, well at least until they start singing because like I said earlier pretty much everything in the movie goes too far. A lot of the character-focused content in The Final Frontier is good, it’s the plot that lets it down resulting to the open mockery by almost all who have seen it. Even several side characters get interesting and fun things to do whether it’s Sulu attempting shuttle bay entry without a tractor beam, Scotty fixing the many new problems with the new version of the Enterprise or even Chekov who manages to trick Sybok into believing he’s the Captain. Although saying all this I do have to mention that the scene in which Uhura has to dance provocatively to lure some men from their post while wearing little clothing is nothing short of abysmal.

While Star Trek V loses steam as it progresses it does have one fantastic scene later on in the proceedings in which Sybok attempts to persuade the triad of following him on his mission by accepting their pain.  Kirk refuses with Shatner going for the ‘full-Shatner’ line delivery and while that’s often hit-or-miss it works for the scene and the film as a whole but we do see visions of both the pain that drives Spock and McCoy. Spock sees his birth and his father Sarek disapproving of how human he seems, which is an effective but well trodden aspect to the character but it’s McCoy’s vision which makes the scene as good as it is. After re-watching The Final Frontier I’m convinced it’s McCoy’s best movie with great humour early on as he watches Kirk ‘go climb a rock’ and his most emotional scene later on with the vision of his dying father finally giving DeForest Kelly a moment to reveal his amazing range. Witnessing an emotional bedside chat between Bones and his father before the revelation that McCoy euthanized his dying father only to discover a cure was created a short time after is heart breaking giving unprecedented insight into the already well known character.

Star Trek V: The Final Frontier is a bad movie; there’s just no getting away from it but experiencing it with a positive attitude can uncover some great moments making it at least watchable. I even shocked myself and found the opening 30 minutes to be more enjoyable than the first 30 minutes of Star Trek IV: The Voyage Home which I have always found a little dull until the time travel segment. Whatever your opinion at least we can all agree on one good thing about The Final Frontier: It’s a short movie.