Come On Down TO South Park...

South Park returned to our consoles this week with the fantastic sequel to 2014’s Stick Of Truth. The newest entry, The Fractured But Whole has been positively received and fans feel this could be the definitive video game based on the beloved town of south park. Which is a fair comment to make considering previous attempts to bring Kyle, Kenny, Stan, and Cartman to consoles resulted in some mediocre games. Here we will take a brief look back and those missteps as we chart the rise of the South Park video game. South Park hit the N64 when the TV series was at the height of its popularity. The story had many familiar concepts and beats lifted from the main series and follows the boys as they take up arms to investigate a mysterious evil asteroid heading to town. It was Developed by Iguana Entertainment, best known for developing the Turok series, Appaloosa Interactive and Published by Acclaim Entertainment.

South Park took on the first-person shooter genre, putting players in control of either Cartman, Kyle, Stan or Kenny. The gameplay revolved around the player defeating various south park themed enemies across a level in order unlock the exit to the next level. The enemies featured had the distinct South Park feel such as rabid mutant turkeys, deformed clones of the townsfolk, alien visitors, berserk robots, and sentient killer toys. In addition to completing levels, the player must also prevent large enemies in the stage from reaching the exit before they do. 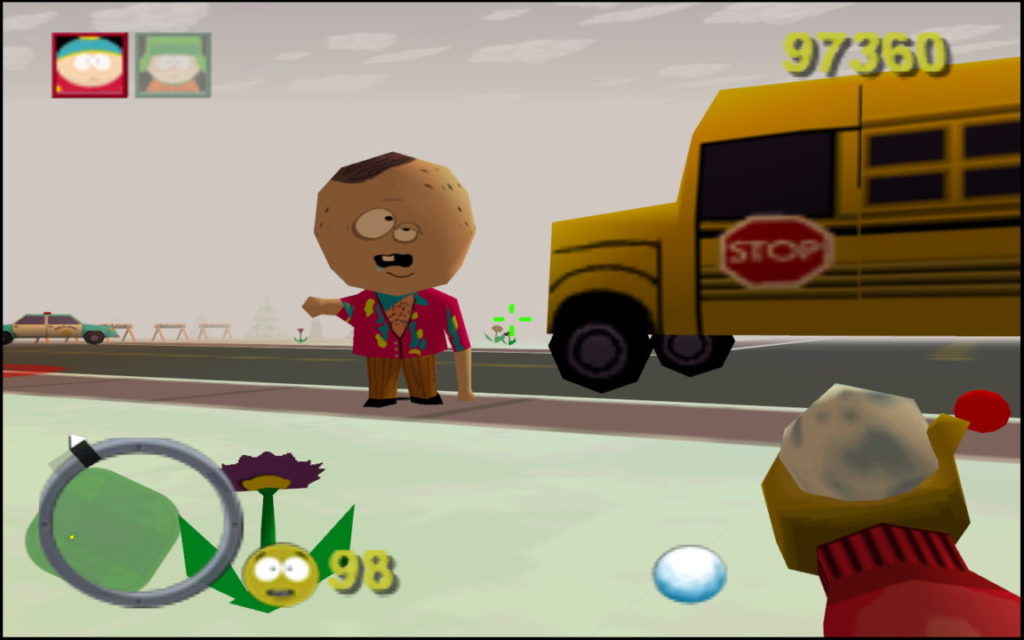 The game featured a multiplayer mode known as Head-to-Head which allowed the players to select the level, characters, and game style (time-limited, damage limited, or unending) to battle it out. In the PlayStation and Nintendo 64 versions, upon reaching select stages in the single-player mode, codes were revealed. These could then be input into the “Cheesy Poofs Decoder” to unlock additional characters for Head-to-Head play. The Microsoft Windows version allows for online head-to-head play which had all characters unlocked from the get-go. I have positive memories of the game, however, a recent playthrough helped me realize that maybe I am looking back with rose-tinted glasses. South Park’s critical reception actually depended on the platform being reviewed. Overall, the Nintendo 64 version generally received positive reviews but the PC and PlayStation reviews were overwhelmingly negative. The PlayStation and PC versions suffered from bad graphics, poor visuals and bad voice acting with GameSpot stating that “South Park is definitely one of those games that is bound to come up when you start thinking about the worst game you’ve ever played.” A year after south park first hit consoles it was back, but not as a sequel. Chef’s Luv Shack was drastically different from the first game, ditching the first person perspective to become a 2D game show-style party game instead. The game has you answering South Park Trivia questions in a game show styled setting. After each set of three questions, you play a randomly selected mini-game. Players score points by correctly answering questions and doing well in the mini-game rankings. The game was designed to be exclusively multiplayer; when played by only one player there is no computer-controlled character, so that player always wins, even with a negative score. The Mini-games themselves were often riffs on arcade classics reskinned to fit the South Park theme of crude jokes. For example, one mini-game is an asteroid clone only instead of asteroids, its butts. Big Floating Butts. Another is basically Donkey Kong but you’re a cat trying to get to the top to steal Cartman’s cheesy puffs.

South Park: Chef’s Luv Shack was met with mixed to negative reviews. Aggregating review website GameRankings gave the Nintendo 64 version 50.88%, the Dreamcast version 50.21%, the PC version 47.50%, and the PlayStation version 41.95%. Pretty fair as the game is only truly fun when playing when you are 8 years old and in a group of four. It also didn’t help that PlayStation players required the multitap adapter to play 4 player and oddly PC players had 2 players using a keyboard and the other 2 players had to use Joysticks. Needless to say, it does not hold up to this day. The 90’s was rife with licenses being slapped on games and this is a prime example.

In my opinion, the worst of the trio of South Park games from Acclaim and the biggest offender of cashing in. Mario Kart was big and everyone wanted a piece of that Karting pie. As with the previous two games, South Park creators, Trey Parker and Matt Stone had little to do with the development of South Park Rally and have since publicly criticized Acclaim and the quality of the games as well. With good reason too, this game felt lazy and rushed, something confirmed by developers Tantalus Interactive who admitted the game was done on three platforms simultaneously and took just seven months.

When challenging the king of the Kart racing world you need to bring something special to the table, something South Park Rally failed to do. Mediocre and uninspired powerups, muddy visuals and dull gameplay was such a disappointment at the time and seemingly killed off South Park’s presence in gaming for the next decade. Nearly 10 years fans of South Park went without a video game. We came close with a few canceled ones but it wasn’t until 2009 when South Park Let’s Go Tower Defence Play! hit the Xbox 360 as an arcade title. As the title suggests, it was a tower defense strategy game but with the added element of some fast-paced action as well. It tasks the player with strategically building towers to eliminate waves of enemies in tradition tower defense style but in LFTDP players can also control a character to attack the enemies directly. This time around, Trey Parker and Matt Stone were involved in the game from the beginning with most of the game’s art assets provided by South Park Digital Studios and the game’s dialogue being archive recordings from the show’s past seasons, as well as new lines recorded by the original voice talent of the show. This helped make the game feel more like the TV show than the previous three games ever did. Enemies you fight along the way were familiar to fans of the show, as you would face off against hordes of Ginger Kids, Cows, 6th Graders, Underpants Gnomes, Mongolians and more.

It was positively received with GameSpot giving the game a 7.5 out of 10 saying “A great sense of humor and challenging gameplay make Let’s Go Tower Defense Play! easily the best South Park game to date.” IGN gave the game a 7.0 out of 10 because of the story and non-stop nostalgia. The game began to repair the franchise’s reputation in video games, even winning the 2009 Spike Video Game Award for “Best Game Based on a Movie or TV Show”. South Park: Tenorman’s Revenge is yet another genre jump, this game is a platformer this time Developed by Other Ocean Interactive, in collaboration with South Park Digital Studios and Xbox Live Productions. Drastically different from a tower defense game, this platformer has you controlling one of the four main characters with the goal being to battle minor character Scott Tenorman and his army of gingers whilst traveling through time. The game is pretty generic, so much so that although I’ve played it I remember little. The story is ridiculous even for south park and the gameplay is only ok. It’s not a bad game, just forgettable, receiving mixed reviews from critics. On Metacritic, the game has a score of 52 out of 100, based on 16 reviews. Polygon said, “Licensed games get a bad rap, but South Park: Tenorman’s Revenge fails in ways far beyond the average cash-in.” The game did become more fun in the multiplayer and some of the dialogue was witty, but after the improvement that was South Park Let’s Go Tower Defense Play this game just felt flat. AKA the moment South Park games finally hit the height of quality. The stick of truth was yet another genre swapping game, this time taking on the turn-based RPG. Who better to do this than RPG veterans Obsidian Entertainment. The game also differs to past games by not casting you as one of the boys but as the New Kid, who has moved to the eponymous town.  The kids are roleplaying fantasy characters battling it out to get the titular and all-powerful Stick of Truth. Their game quickly escalates out of control and brings them into conflict with aliens, Nazi zombies, and gnomes, threatening the entire town with destruction.

Matt Parker and Trey Stone were involved from the very beginning and wrote the game’s scripts, did the voice work and consulted on the design every step of the way. Their goal was to create a game that looked and felt like an episode of the show, which is exactly how the game feels. They chose to take the concept to Obsidian as they were fans of the studios previous RPG’s such as Fallout: New Vegas. The Stick of Truth’s production was turbulent due to THQ, the original publisher, going bankrupt but thankfully the rights to the then almost complete game were acquired by Ubisoft in early 2013 who pushed the game launch back to 2014. South Park has always bordered on the offensive comedy, taking shots at everyone and everything equally, however, The Stick of Truth was subject to censorship in some regions because of its content. These scenes were replaced with detailed explanations of what occurs in each scene. These scenes included Nazi Iconography that was banned in Germany and an anal probe scene with Randy which was banned across Europe.  The game was positively received and considered one of the most successful adaptations of licensed material to a video game. GamesRadar said that The Stick of Truth was to South Park as Batman: Arkham Asylum was to the Batman franchise, high praise indeed. Despite its success Matt Stone and Trey Parker said that the whole process was so difficult and stressful they would not make another one…. Thankfully they changed their minds and announced a sequel, South Park: The Fractured but Whole in June 2015. The game was developed by Ubisoft San Francisco, replacing Obsidian Entertainment. It also ditched the fantasy setting for a more relevant superhero theme focused around Coon and friends, alter ego’s of Kyle, Kenny, Stan, and Cartman. So far the game has received mostly positive reviews and it looks like the era of great south park video games is here to stay.

The Ten Best Television Episodes of 2017