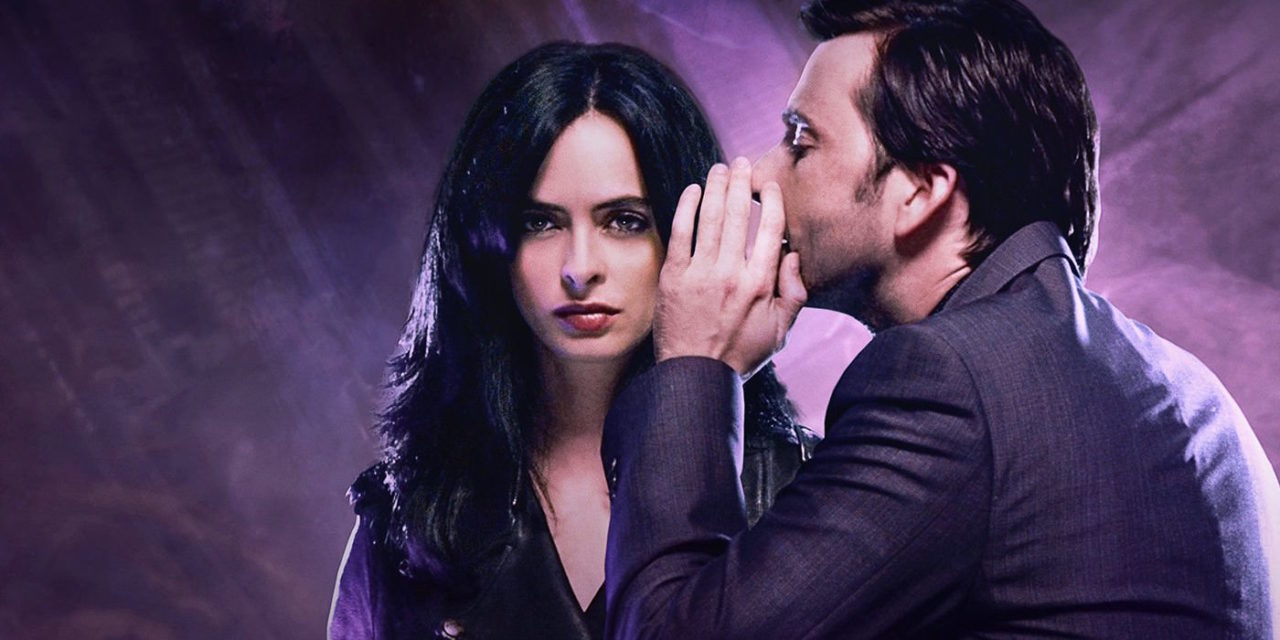 As we get closer to the release of the second season of Jessica Jones on March 8th I’ve been revisiting the first, which is my favourite of all the Marvel/Netflix shows. In my previous article I explored the opening seven episodes and the heroes of the show and now to round out the season let’s take a look at the villains of the piece and the final seven episodes. If you’ve forgotten the events of the first season then this article will get you up to speed and I’ll comment on what I think worked and didn’t work in the debut season of Jessica Jones.

Episodes 8 and 9 are the peak of the first season. Kilgrave has brought Jessica back to her childhood home which he has made to look exactly the same as it did in her youth as a bizarre show of love. This is the first time in the season where we get scenes between our protagonist and antagonist and they don’t go the way you would expect. Kilgrave is in love with Jessica and wants it to be reciprocated and for a while Jessica thinks she can possibly use this to direct Kilgrave in a direction of good. She takes him to a hostage situation and makes him be a hero; saving the endangered family and making the gunman turn himself in. This is where the true nature of Kilgrave is revealed though because when he returns home he wants instant praise and gratification and takes his anger out on his slaves when he doesn’t receive any. Kilgrave is nothing more than a petulant child.

Up to this point we have seen Kilgrave use his power to intimidate, threaten and rape women making him a villain of ever increasing relevancy. He also thinks he’s charming while he does it and that the grandiose lifestyle some how makes it alright. At one point he actually says “What part of staying in five-star hotels… is rape?”. We find out however that his demanding nature is rooted in his childhood which was, quite literally, tortured and he hasn’t grown past constantly needing praise and attention, and is looking for that in a woman as well as a sexual relationship, kind of like an evil Buster Bluth. Kilgrave was experimented on as a child by his parents who caused him much pain, both physical and psychological, to try and cure a neurological condition he had. They succeeded but inadvertently gave him superpowers in the form of a virus which creates “micro particles in the air” that make people do anything Kilgrave says. When Kilgrave got bored of his parents carrying out his every command he left for America to try and find someone who could fulfil his every desire which led him finally to Jessica.

Staying at Jessica’s childhood home for an episode is a great idea, bringing in backstory in an interesting way. We see that Jessica’s parents and brother died in a car crash and that she has had powers ever since. She feels survivor’s guilt over the crash which returns during Kilgrave’s reign of terror as she blames herself for the deaths of anyone caught up in his ‘courting rituals’. We discover that Trish’s mother adopted Jessica soon after the accident as a marketing strategy to make her daughter look even better in the press and they start a great friendship which has never dissipated. The origins of Jessica’s powers are also teased here and that tease was all I needed. I don’t need a full-on origin story and the trailer for season 2 has me worried that that is where they are heading. Rather than answers I like them playing coy with what’s in the comics especially the jokes about whether or not she can fly and that when Trish proposes ‘Jewel’ as a superhero name she responds, “Jewel is a stripper’s name”.

For the first few episodes of the season Jessica would recall the street names of her youth to relieve anxiety and centre herself but now Kilgrave has even taken away the safety of this routine away from her. By taking over her home he has infected every part of her life, nothing is safe, not even her childhood. This makes her realise Kilgrave cannot be saved and so she takes him to sealed room in an old CDC facility to get a confession out of him in the series’ best episode “Sin Bin”. Jessica is now in control of him, or as she puts it, “This bitch is in control of you now asshole”. She brings her allies to help her prove Kilgrave’s powers on film and even manages to find Kilgrave’s parents and bring them to him to provoke him. The episode makes Kilgrave as sympathetic as possible and adds multiple layers to the character as he confronts his parents. Seemingly as always though, Kilgrave gains the upper hand and kills his mother while his father barely survives and as Jessica tries to stop him she discovers that she is now immune to his powers in a fantastic reveal. The conclusion of the episode is fantastic, as is the build-up, and it feels like the season should have ended soon afterwards but instead we get four more episodes that fail to live up to the rest of the series.

I guess this is as good a time as any to bring up the character of Frank Simpson. We’re introduced to him as a cop whose been ‘Kilgraved’ and sent to kill Trish. He thinks he’s succeeded and is told to kill himself which he almost does before Jessica saves him. You’d think that is the end of the character in the show and I love that it’s not. He could have been a one-episode guest character, a minor plot point and a means-to-an-end for Kilgrave, but instead he’s used to show the after effects and consequences of superpowers. He becomes protective of Trish and starts a relationship with her and then tries to take out Kilgrave against Jessica’s wishes with some old army buddies. Instead he is injured in an explosion but gets his old special unit army doctor, a man named Kozlov, to give him some red, white and blue pills that give him super strength. This combat enhancement turns him into the villain ‘Nuke’ and feels completely superfluous to the rest of the show when the focus in the final episodes should be Kilgrave.

The Marvel Netflix shows (apart from Daredevil season 1) always have the same problem: they’re too long. They should be 10 episodes but instead the narrative is stretched to 13 and this makes the final four episodes of the season a little disappointing. There are far too many scenes between Jessica and Kilgrave in these final few episodes and they lose their potency fast. The show’s still good but it feels like the series is just biding time until we get to the finale. Even at the shows worst however it’s still doing interesting things it’s just that they feel unnecessary. Here’s a collection of the wild plot points that take up the show’s final few episodes and to me feel tacked on when, after “Sin Bin”, the series should have quickly wrapped up:

The impetus of the ending, just like the beginning, is Hope. Kilgrave gets her free from prison after a quick chat with the DA and later he proposes an exchange of Hope for his father. Jessica agrees but Hope is tired of being used as a bargaining chip and so she takes herself off the table by slitting her throat. Her dying wish is that now that nobody else’s life is in the balance, Jessica can finally kill Kilgrave, who escapes with his father while Jessica is with Hope in her final moments. At this moment Jessica finally vows to kill Kilgrave and Kilgrave decides he can no longer connect with Jessica and vows to kill her, setting up the season’s endgame.

Kilgrave uses his father, and Hope’s aborted foetus (you know a show’s dark when an aborted foetus is a plot point), to make his powers stronger and now he can control hundreds of people at a time. More could be done with Kilgrave’s expanded power; just imagine him getting the whole city to hunt down Jessica but instead this is limited to 5 people in a hospital and about 20 at the docks during the final confrontation. After killing his father, Kilgrave decides to flee with Trish in tow, claiming to Jessica that he will rape her every day for the rest of her life. Jessica then plays Kilgrave, acting like she is once again under his control, and after a long tense conversation he buys it only for Jessica to finally reach out and snap his neck. It’s a great scene and the emotion of the finale is much better than the action which is fairly lacklustre.

We get a few final scenes to wrap the season up: Trish starts to reconcile with her mom and discovers from old files that IGH, the same company that handled Simpson, payed for Jessica’s medical bills after the car crash in her youth which is a plot thread that looks likely to be picked up in season 2. Hogarth returns briefly to get Jessica off the hook for killing Kilgrave and Malcolm becomes a part of Alias Investigations, working for Jessica who has since been deemed a hero by the public and is getting an inordinate amount of potential work. After my rewatch I’m very excited for season 2 and, while I was a little more negative in this second article towards some aspects of the show, I’m confident in the fact that this is my favourite season of any of the Marvel Netflix shows. What Jessica Jones does well it does incredibly well and the complexities to the characters and the exploration of the challenging themes are unique in the increasingly large genre. Bring on season 2!

To conclude here’s some more random thoughts on the first season of the show:

What do you think of the debut season of Jessica Jones? What is your favourite Marvel/Netflix show? Let me know in the comments and geek out with me about TV, movies and video games on Twitter @kylebrrtt.

Tanked Up 108 – Brewdog Screws the Pooch